Pilate promoted the Imperial Cult by setting up shields in Jerusalem

In addition to the use of coins, Pilate used other means to promote the Imperial (Emperor) Cult in Roman Palestine.

In the previous post we called attention to the article by Prof. Joan E. Taylor who said that the coinage of Pilate and the Pilate inscription from Caesarea,

“indicate a prefect determined to promote a form of Roman religion in Judaea.”

The residence of the governor of Judea was at Caesarea Maritima, but he came to Jerusalem for special events. Pilate would likely stay at Herod’s place. This is where he would have set up shields in honor of the Emperor Tiberius. Both Josephus (JW 2:169ff.) and Philo of Alexandria (Legatio ad Gaium) record this episode.

What were these shields? This coin that was minted later by Felix, prefect of Judea about AD 52-59 (Acts 23-24) might give us an idea. The obverse of the coin shows two oblong shields and two spears. 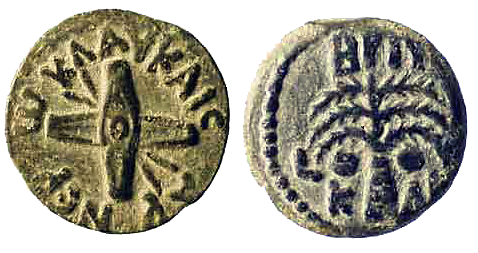 The actors involved in the RACE show at Jerash, Jordan, show us what the shields of the 6th Roman Legion might have looked like.

Enactment of soldiers of the 6th Roman Legion. Photo by Ferrell Jenkins.

A denarius bearing the image of Augustus was struck in Lyon between 2 BC and AD 4. The reverse shows Gaius and Lucius standing, facing, holding shields and spears. In this case the shields are round, and are shown in association with the lituus and simpulum, symbols of the Imperial Cult. (I think you can easily find larger images of this coin on the Internet.)

Our point in all of this is to show that when Pilate erected the shields in Jerusalem it was in fact a symbol of the Imperial cult.

Next we plan to discuss the tiberium built by Pilate at Caesarea.

After the death of Herod the Great, his son Herod Archaelaus (Archelaus, Matthew 2:22) ruled over Judea until AD 6. His misrule prompted Rome to appoint a series of prefects or governors over Judea. There were 15 governors appointed from Coponius (AD 6-9) to Gessius Florus (AD 64-66).

Carl Rasmussen called my attention to an excellent article by Joan E. Taylor in New Testament Studies dealing with the part played by Pilate in promoting the Imperial Cult. Taylor, now Professor of Christian Origins and Second Temple Judaism at King’s College in London, says that the coinage of Pilate and the Pilate inscription from Caesarea,

Pilate minted two types of coins. The first coin, minted in AD 29, shows three bound ears of barley on the obverse. The inscription reads “Julia, of Caesar.” After the death of Livia, wife of Augustus, and mother of Tiberias, she was given the name Julia. One ear of barley is standing and two are drooping. On the reverse we see a libation ladle (simpulum) used by Roman priests to pour wine over sacrificial animals. The inscription reads, “TIBEPIOY KAICAROC (of Tiberius Caesar) and date LIS” (Hendin).

Coin minted by Pilate in AD 29.

The second coin, struck in AD 30, shows a lituus, a wooden staff or wand used by Roman augures to signify their authority. The inscription on the obverse reads TIBERIOY KAICAROS (Tiberius, Caesar). The reverse shows a wreath with the date.

Coin minted by Pontius Pilate in AD 30 showing a lituus.

Pilate’s coins, by contrast, depict two key items of specifically Roman religious spiritual use: the lituus and the simpulum. In depicting these instruments on the Judaean coinage Pilate advertised particular rituals of exclusively Roman cult. These instruments were not generic to all cults in the Empire, which now embraced the Hellenistic world, let alone to Jewish or Samaritan rituals, but had emblematic and ritual uses within Roman rites alone. The ritual instruments themselves are described by terms not used for profane utensils, even when these utensils are quite similar (see Arnobius Adversus Nationes XXTV.1-6). They were entirely sacred implements, and they were cared for and stored in sacred space. (558-559)

Roman coins and the Imperial Cult

Coins were important in the time of Jesus, and were more significant than their face value. On one occasion the Pharisees plotted against Jesus in an attempt to entangle Him in His words. They sent some of their disciples to Jesus to ask, “is it lawful to pay taxes to Caesar, or not?”

Bust of Tiberius in the Louvre.

When Jesus asked them to show him the coin used for the tax they brought Him a denarius. The denarius of that time would likely be one minted by the Emperor Tiberius (A.D. 14-37). Jesus asked, “Whose likeness [eikon] and inscription is this?” They said, “Caesar’s.” Jesus responded, “Therefore render to Caesar the things that are Caesar’s, and to God the things that are God’s.” Read the full account in Matthew 22:15-22).

The photo below shows a Denarius with the image of the Emperor Tiberius. The inscription on the obverse (heads) reads “TI CAESAR DIVI AVG F AUGUSTVS” (Tiberius, Caesar Augustus, Son of the Divine Augustus). 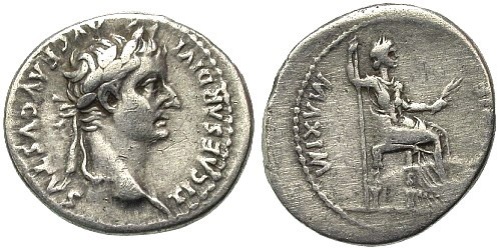 David Hendin (Guide to Biblical Coins, 1st. ed, 170-171) describes the reverse (tails) of the coin: “Female figure sits on a plain chair to right, she holds olive branch in her left hand and long sceptre in her right.” The inscription PONTIF MAXIM means High Priest, which Hendin says is “another of the emperor’s titles and later a title of the Bishop of Rome.”

This coin clearly demonstrates the Emperors’ claim to being the son of the divine Augustus, and to being High Priest in the Imperial Cult.

It is not surprising that this Tiberius denarius–popularly known as the “tribute penny”–is of all coins the one most in demand by collectors who cherish their New Testaments. (Coins of Bible Days, 99)

In the next post I plan to discuss Pontius Pilate, prefect of Judea, and what we can learn about the Imperial Cult from his coins and the inscription bearing his name at Caesarea Maritima.

Special Note About Coin Images. For many years I have included several links to coin and coin collectors under the Bible Places page at the Biblical Studies Info Page. I have found that these web sites come and go. If I use the image of a coin that rightfully belongs to another photographer I will be pleased to give credit if you will point me to the site.

Herod built a temple to Augustus at Samaria

The city of Samaria had been rebuilt by Herod the Great and named Sebaste in honor of the Emperor Augustus. The modern name of the small town of Samaria is Sebastia.

Herod the Great built a temple to Augustus with a monumental staircase over the palace area of the Israelite kingdom. The temple was destroyed, but later rebuilt along the same plan by Septimius Severus (Roman emperor, A.D. 193-211). The monumental staircase still stands at the top of the tell. 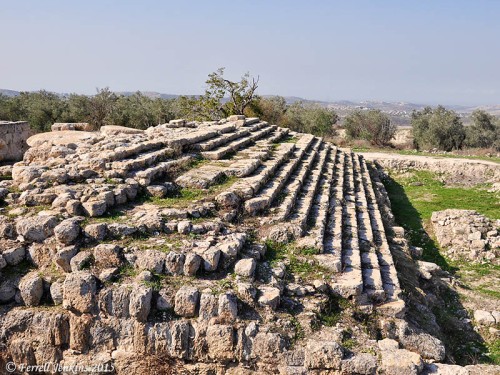 Monumental steps from the time of Septimius Severus mark the site of Herod’s Temple to Augustus. Photo by Ferrell Jenkins.

Some remnants of column capitals rest at the top of the steps. 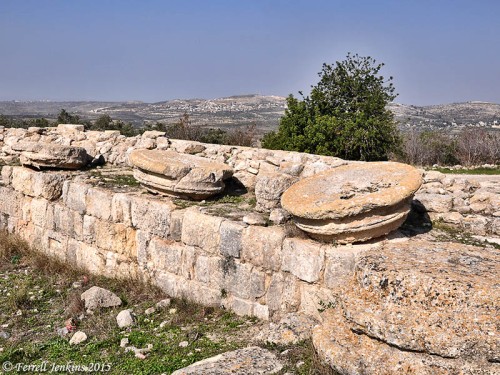 Remnants of some of the columns rest at the top of staircase. Photo by Ferrell Jenkins.

This was the second of three temples erected by Herod in honor of Augustus. In two previous posts we have discussed the temple at Caesarea Maritima and the one in the district of Caearea Philippi (perhaps Omrit).

Carl Rasmussen wrote about the Imperial Cult a few months back on his Holy Land Photos’ Blog here. He says,

IMHO we also need to give emphasis to the fact that Herod the Great had built  three Imperial Cult Temples — all less than 40 miles from Nazareth/Capernaum.  By the time that Jesus began his public ministry these Imperial Cult Temples (namely those at Caesarea Maritima, Sebastia, and the one near Caesarea Philippi [= Omrit])  had been in existence for over 40 years!

In my recent lecture at the Florida College Lectureship I discussed two texts from the ministry of Jesus that may be understood in the light of the Emperor worship prevalent in the country. One was the location of Peter’s confession of Jesus: “You are the Christ, the Son of the living God” (Matthew 16:16 ESV). See a discussion here. The second text I used was the one involving the question, “Is it lawful to pay taxes to Caesar, or not?” (Matthew 22:17). More about that in a post to follow.

Many of our readers attend the annual Florida College Lectureship. The theme for the February 2-5, 2015 lectureship is “Light Shall Shine Out of Darkness.

I am scheduled to present an illustrated lecture on “The Roman Imperial Cult in Palestine” Tuesday morning at 10 a.m. in Puckett Auditorium. It would be my pleasure to see some of our readers in the audience.

Florida College Press has recently published two of my out-of-print books. Revised editions of Biblical Authority and The Finger of God are back on the shelf.

The bookstore manager asked me to do a book signing Thursday between 12:30 and 1:30 p.m. Love to see you there.

Other books in print include:

Several books that I have edited or have a chapter are listed if you search with my name at the Florida College Bookstore site here.