Drew’s third birthday was October 24th. He has been a real blessing to us. Grandmother and I keep him as often as possible. He is a good learner. I am hopeful that I will be able to share some travel experiences with him.

His dad made him a “Big Boy Bed” like a fire engine for his birthday. Yes, I mean that his dad made it all by himself. What talent! You might enjoy this photo that I made when Drew first saw the bed. 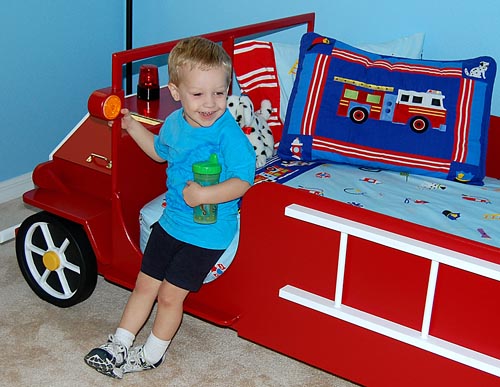 Today’s Zaman, reports that the archaeological excavation at Ephesus may continue “for centuries.” The article says that work began at Ephesus 138 years ago. This reference seems to be to 1869 when the English architect J. T. Wood found the marble floor of the temple of Diana. Some research had been done as early as 1845.

Most of the archaeological work at Ephesus has been done by Austrians. They began the work in 1895 and have continued until the present time.

The article reports an interview with Dr. Fritz Krinziner, director of the dig and head of the Austrian Archaeology Institute. I note that Dr. Krinziner wrote Preface 2 in Ephesus: 100 Years of Austrian Research, published in 1996. Here are a few interesting comments from the article.

” He [Krinziner] stressed that it would be impossible to uncover the entire ancient city at once, underlining that only 10-15 percent of the site has been unearthed so far.”

“The excavation work may last for centuries. This is not an easy job. We focus on spots where we are likely to find something important as we cannot carry out the entire excavation at once.”

The article says that 1.5 million people visited Ephesus last year. An added note says that the Greater Izmir Municipality has announced plans “to establish an electric railway connection, similar to a tram, in Ephesus.”

The complete article may still be available here.

I speak to some people who seem to think that most of the archaeological work in various biblical cities has already been done. The work is complete! Think again.

Ephesus is visited by many tourists who have no interest in the Bible. They arrive on the cruise ships that dock at nearby Kusadasi. Others find the ruins interesting because the city was the site of Paul’s work (Acts 19). I think the tradition that the apostle John was here prior to being exiled to Patmos is a reliable one. The first letter within the book of Revelation is addressed to the church at Ephesus (Rev. 2).

This photo shows the Library of Celsus and some costumed actors from one of the cruise ships putting on a show for the passengers.

The Library was built in A.D. 135, after the time of Paul and John. The first time I saw this area, in 1968, only the steps were visible. The Austrian excavators did a marvelous job of reconstruction between 1970 and 1978. It is estimated that the Library could hold between 9,500 and 12,000 rolls. The arch to the right leads to the ancient agora.

We visit Ephesus on our Steps of Paul and John tour.

The Middle East Conflict and the Bible

Shortly before the first Gulf War I pulled together some of the material I had prepared about various problem associated with the Middle East conflict and the Bible. After going through several printings I allowed Mark Roberts to put the material for sale online at BibleClassMaterial.com. A single copy may be purchased, or a church may secure a license to use the material in classes. Take a look.

The book deals with the Arab-Israeli problem, whether the modern state of Israel is in fulfillment of Bible prophecy, and other important issues. There is also material about Iraq and Islam. At the BibleClassMaterial website you will find more details about the content.

If you are looking for the blogs and photos of our Ancient Crossroads tour of Biblical and Historical Turkey you need to click on the archive for May to begin the the journey. The tour continues in June.

The Best of Scotland tour blogs will be found in the September Archive.

A Remembrance: Sputnik I launched 50 years ago today

History changed on October 4, 1957, when the Soviet Union successfully launched Sputnik I. The world’s first artificial satellite was about the size of a basketball, weighed only 183 pounds, and took about 98 minutes to orbit the Earth on its elliptical path. That launch ushered in new political, military, technological, and scientific developments. While the Sputnik launch was a single event, it marked the start of the space age and the U.S.-U.S.S.R space race.

If you have forgotten the sound transmitted by Sputnik as it passed overhead, listen to a short WAV file on the NASA site.

Having completed four years of college at Florida Christian College (now Florida College) in Temple Terrace, FL, a few months earlier I had moved to preach in Auburn, Kentucky. A college friend was spending the summer preaching in nearby Morgantown. Elizabeth and I drove up to visit him. My recollection of the town at that time is that there were businesses on only one side of the square (meaning across from the county court house). Lawson informed us that many of the people there believed that the whole thing about Sputnik was some kind of a trick. Nothing was up there, according to them. Later, when astronauts walked on the moon, there were some in numerous places who said it was all filmed in the Arizona desert.After Russia began manned, tethered space walks, one of the atheistic astronauts is reported to have said that he walked in space, but did not see God. Someone suggested that if he had cut his tether he might have seen God. In the intervening years we have learned so much about the expanding universe that it difficult to countenance the ignorance and arrogance of men claiming to know there is no God.

Space exploration has probably benefited each of us in many ways through the developments and products we now use. There currently seems to be a common view that the program is going to eventually prove once and for all that all this universe is a product of naturalistic, chance evolution. Not so fast.

Dr. Robert Jastrow, an astronomer, who admitted that he was an agnostic in religious matters, wrote:

“It is really very surprising that the labors of the astronomers, studying the Universe through their telescopes, should have brought them to the conclusion that the world had a beginning. Scientists feel more comfortable with the idea of a Universe that has existed forever, because their thinking is permeated with the idea of cause and effect. They believe that every event that takes place in the world can be explained in a rational way as the consequence of some previous event. If there is a religion in science, this statement can be regarded as its main article of faith. But the latest astronomical results indicate that at some point in the past the chain of cause and effect terminated abruptly. An important event occurred–the origin of the world–for which there is no know cause or explanation” (Until the Sun Dies. 1977. 27).

“A sound explanation may exist for the explosive birth of our Universe, but if it does, science cannot find out what the explanation is. The scientist’s pursuit of the past ends in the moment of creation; the origin of the world is a fact that he can never hope to explain” (Until the Sun Dies. 1977. 28).

In another book, Dr. Jastrow said,

“Now we see how the astronomical evidence leads to a biblical view of the origin of the world. All the details differ, but the essential element in the astronomical and biblical accounts of Genesis is the same, the chain of events leading to man commenced suddenly and sharply, at a definite moment in time, in a flash of light and energy” (God and the Astronomers. 2nd ed. 1992. p. 14).

Here are a few helpful comments regarding the origin of the universe.

“The heavens declare the glory of God, and the sky above proclaims his handiwork” (Psalm 19:1 ESV).

The writer of the Epistle to the Hebrews says,

“For every house is built by someone, but the builder of all things is God” (Hebrews 3:4 NET).

Paul expressed the value of the natural creation even to men who do not have the light of propositional revelation (the gospel, Romans 1:16).

“For since the creation of the world His invisible attributes, His eternal power and divine nature, have been clearly seen, being understood through what has been made, so that they are without excuse” (Romans 1:20 NASBu).

Are you sometime bothered by unwanted phone calls from salespersons and companies you have never heard about? You can register your phone number, including you cell phone, on the government list. Full information is available at the Do Not Call page. We had this service in Florida before the federal service became available. Within a month of registering you will probably be able to complete your meal without an interruption. This is a free service.