The Wilderness of Judea – a Hard Way to Go 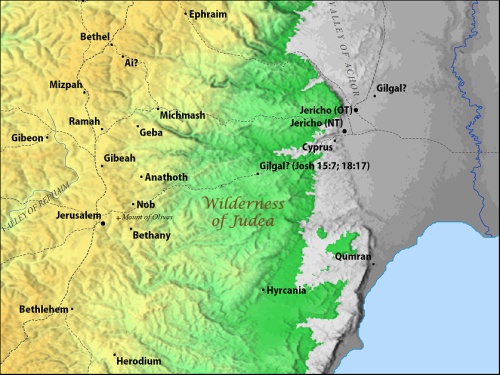 A portion of the Judean Wilderness is displayed in Green on this map, but it is a very dry area of the country. The walking trip from Jericho to Jerusalem takes at least 7 hours and 30 minutes. Made with BibleMapper.

What did you go out into the wilderness to see? A reed shaken by the wind? (Luke 7:24 ESV)

This is a fairly typical view of the Wilderness of Judea at sea level. Photo by Ferrell Jenkins.

The wilderness (Greek eremos) of Judea is described this way in Bauer (BDAG):

Of the Judean wilderness, the stony, barren eastern declivity of the Judean mountains toward the Dead Sea and lower Jordan Valley. 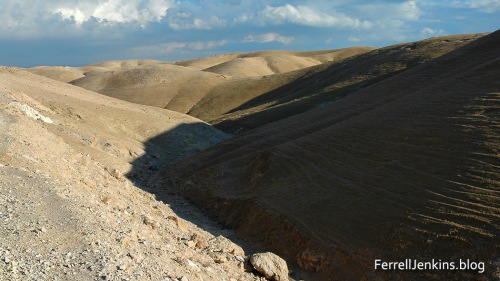 The wilderness of Judea a short distance west of Jericho. The shadows constantly change the appearance of the wilderness. Photo by Ferrell Jenkins.

The Hebrew word for this wilderness is midbar. Charles F. Pfeiffer said the wilderness of Judea,

is the region of rugged gorges and bad lands in the eastern part of Judah where the land slopes off toward the Jordan Valley. In ancient times this area was infested with wild animals. Except for a brief time during the spring rains the wilderness is arid. (Baker’s Bible Atlas, 201) 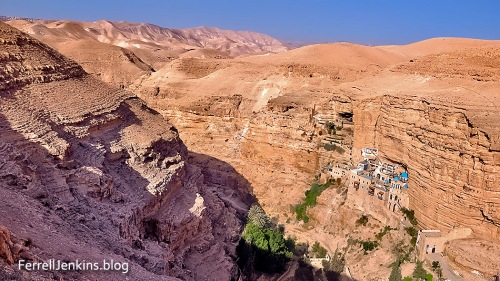 The Saint George monastery hangs along a cleft in the wilderness of Judea where the Wadi Kelt runs from near Jerusalem past Jericho. Notice the beautiful color shades here. Photo by Ferrell Jenkins.

Many people who read the Bible in English, without checking into the matter, think of the wilderness as being a place filled with wild growth and underbrush. Jesus’ question to the crowds indicates that no reeds are to be found in the wilderness. In this case a picture really is worth a thousand words. This shows one of the many changing views one might see in the wilderness. This one was made in the month of November and shows a view west toward Jerusalem.

The wilderness of Judea stretches from the eastern slope of the central mountain range to the Jordan River. Of course, it extends much farther south along the Dead Sea.

Carchemish and the Rise of Babylon as a World Power 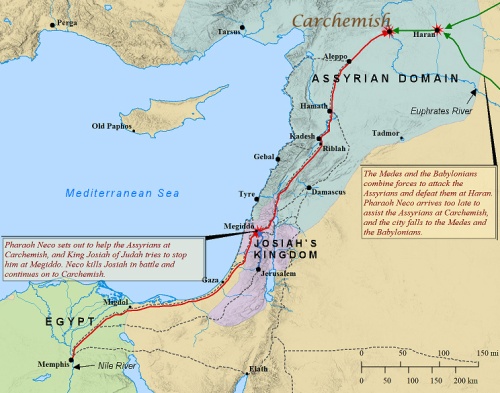 The map illustrating Pharaoh Neco’s trip to Carchemish is included in Bible Mapper v. 5. Click on the map to see a larger, more easily read, map.

Pharaoh Neco came to assist the Assyrians as they fought the Babylonians. But the emerging world power from the southern Euphrates city of Babylon overpowered the Assyrians and the Egyptians and sent Neco running back to Egypt. Nebuchadnezzar, king of Babylon, chased Neco to the border of Egypt.

It is still exciting at Carchemish. I have been within sight of Carchemish a few times. Military installations are clearly visible on top of the tell. The first time I was near Carchemish was in 1995. The tour operator handling my tour in Turkey advised me not to go to Carchemish (Karkamis) because it is “zero on the border” of Turkey and Syria. You may see other photos of Carchemish by using the search box with that word.

This photo was made in Turkey. The site of ancient Carchemish can be seen in the distance to the left of center. The River Euphrates makes a left turn before the mound and continues to flow into Syria and Iraq before flowing into the Persian Gulf. Photo by Ferrell Jenkins.

Jerash is also called Gerasa and Jarash. It was founded by Alexander the Great about 332 B.C., but declined as an important city about 300 B.C. The ruins are seen today are principally from the second century A.D. Roman city. We can imagine what the city of the time of Jesus looked like. 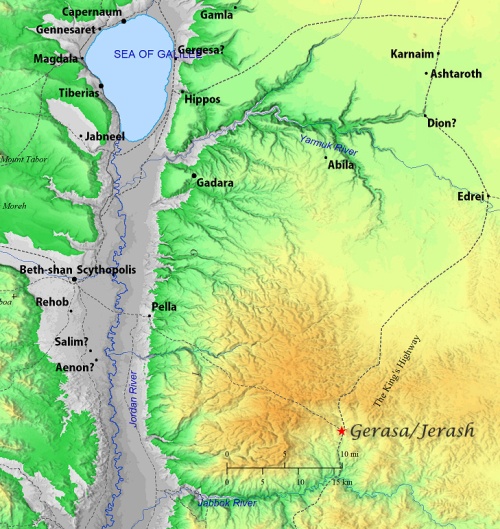 This map shows the relationship of Gerasa/Jerash to Galilee, the principal area of Jesus’ ministry. Photo prepared with BibleMapper v.5. ferrelljenkins.blog.

Jerash is located in a well-watered valley in the mountains of Gilead. The modern village is inhabited mostly by Circassians, who were brought there by the Turks in the last part of the 19th century.

The Triumphal Arch was constructed at the time of the visit of the Emperor Hadrian in A.D. 129. Photo by Ferrell Jenkins.

A German traveler named Seetzen rediscovered Gerash for the Western world in 1806. Excavations were begun in the 1920s. The main points of interest include the following: Triumphal Arch (built in 129 A.D. to celebrate Hadrian’s visit; Oval-shaped Forum (only one of its kind from the Roman period, from 1st century); Temple of Artemis (columns are 45 feet high with Corinthian capitals); Cathedral Church (ca. A.D. 350-375). Thirteen Byzantine churches have been excavated at Jerash.

A view of the cardo of Jerash in Jordan. Jerash was one of the cities of the Decapolis. Photo by Ferrell Jenkins.

People from the Decapolis followed Jesus during His ministry in Galilee. Jerash was the second largest city of the Decapolis, after Damascus (Matthew 4:23-25). When Jesus traveled through the Decapolis he possibly visited the area around Jerash (Mark 7:31).