The Basilica Julia in the Roman Forum

Paul had come to Rome as a prisoner. While at Caesarea he exercised his right as a Roman citizen to appeal to Caesar (Acts 25:11; 28:19).

If then I am a wrongdoer and have committed anything for which I deserve to die, I do not seek to escape death. But if there is nothing to their charges against me, no one can give me up to them. I appeal to Caesar. (Act 25:11 ESV)

The basilica was the seat of the Court of the Hundred (the centumviri), a special civil court which generally dealt with matters of inheritance and actually numbered 180 judges when they all sat together at an important trial. Pliny the Younger describes the scene at one where he pleaded on behalf of a senatorial lady suing her 80-year-old father, who had disinherited her ten days after he took a new wife. In addition to the judges the place was packed with onlookers. Both parties had brought in large numbers of seats for their supporters, behind which were rows of people standing as far as the outer walls, and the crowd spilled upwards in the galleries, hanging over the rails in their efforts to hear the proceedings. (89-90)

Some scholars suggest that this is where Paul’s appeal before Caesar would have been heard (Wycliffe Historical Geography 545). 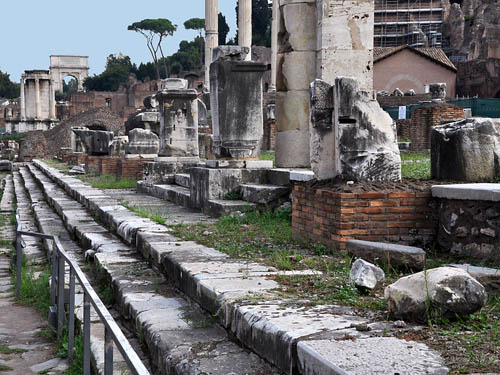 The steps leading to the Basilica Julia in Roman Forum. Photo by Ferrell Jenkins.

The information above describing the crowds that came to the court might provide some understanding of Paul’s statement to Timothy.

Do your best to come to me soon. For Demas, in love with this present world, has deserted me and gone to Thessalonica. Crescens has gone to Galatia, Titus to Dalmatia. Luke alone is with me. Get Mark and bring him with you, for he is very useful to me for ministry. Tychicus I have sent to Ephesus. When you come, bring the cloak that I left with Carpus at Troas, also the books, and above all the parchments. Alexander the coppersmith did me great harm; the Lord will repay him according to his deeds. Beware of him yourself, for he strongly opposed our message. At my first defense no one came to stand by me, but all deserted me. May it not be charged against them! But the Lord stood by me and strengthened me, so that through me the message might be fully proclaimed and all the Gentiles might hear it. So I was rescued from the lion’s mouth. The Lord will rescue me from every evil deed and bring me safely into his heavenly kingdom. To him be the glory forever and ever. Amen. (2 Timothy 4:9-18 ESV)

Those who travel, or those would hope to travel outside of the United States, might find these comments valuable.

Weather changes. That is a statement. We visited Italy and Switzerland in September, 2001. I don’t recall any rain during that trip. Certainly there was not enough to affect adversely the photography. This year we had much rain. No planned sightseeing was affected, but for those who have a major interest in photography it was disappointing.

Flights. The equipment used by Delta flight from Atlanta to Zurich did not have enough room between seats for a 6 feet tall individual. The person ahead of me kept their seat fully reclined the entire trip. The equipment used on the flight from Rome to Atlanta had more space — maybe only a couple of inches. That makes a lot of difference on a flight exceeding 10 hours. So far as I could tell, all seats were filled on both flights. Monday is definitely not a good day to travel. If you have a choice choose the middle of the week when fewer people are likely to be traveling. The plane from Rome had TV screens at each seat. This was very helpful in passing the time. 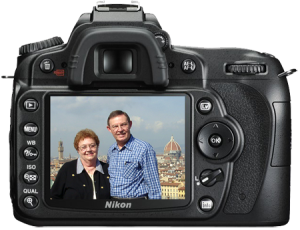 The Nikon D90 Failed Me.

Camera. Earlier I spoke of the new Nikon D90 camera I was using for this trip. I probably lost only a dozen or so photos, but I had lots of trouble. Frequently my camera would not fire. I changed various settings, removed and replaced the SD card, removed and replaced the battery. Still I got the “Format” message. It means to format the card. Eventually I learned that by removing and replacing the battery I could continue to shoot. The photos were good, but sometimes I had to do this three or four times before continuing to shoot. Toward the end of the trip more photos were bad and I was getting the “Error” message. This is my fourth Nikon DSLR. It has been necessary to send each one back for repair. Not good! I’ll be heading for Best Buy as soon as I get unpacked, mail sorted, etc.

It is not the negatives that count. One’s trip should not be remembered by a few bad things that happened, or a few unpleasant experiences one had. Travel should be remembered by the places you have seen, the people you have met, and how these have enhanced your own understanding of man and the world. For those places specifically related to the Bible, the student may remember how this increases his/her understanding of the Scripture.

I asked Elizabeth to read this for content and errors. She added, “And, above all, that you returned home safely.”

We arrived at our residence in Florida a few minutes before 7:30 p.m.

The Brethren, the Roman Forum and the Palatine Hill 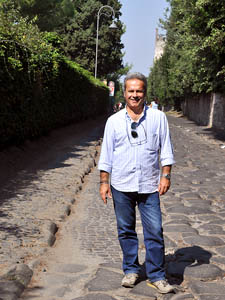 Stefano Corazza on the Appian Way

This morning I spoke again for La Chiesa di Christo in Rome. Stefano Corazzo translated my lesson on the subject “Can I trust my Bible?” I used PowerPoint slides with both English and Italian captions. Several of the brothers and sisters speak English at well as Italian.

Saturday and Sunday were beautiful sunny days in Rome. I tried to take advantage of the light to make some photos that would be helpful in teaching various New Testament subjects, especially pertaining to the book of Acts, the epistle to the Romans, the Prison Epistles (Ephessians, Colossians, Philemon, and Phillippians), and 2 Timothy, which seems to be the last prison epistle.

When I decided to return to the Roman Forum I did so at an entry with immediate access to the Palatine Hill. When I reached the ticket window I was told that tickets were free for Saturday and Sunday. Then I noticed that this included the Colosseum as well as the Palatine Hill and Forum. That was a saving of €12, about $18. My lucky day!

The Palatine Hill is a flat top hill of about 25 acres. Palatial residences of the emperors were built here during the Imperial period. Some of the structures date to a period after the time of Paul. Domitian (A.D. 81–96) modified the hill with new buildings. Two great complexes, called the House of Flavia and the House of Augustus grace the hill. A Stadium was used for minor games and entertainment. 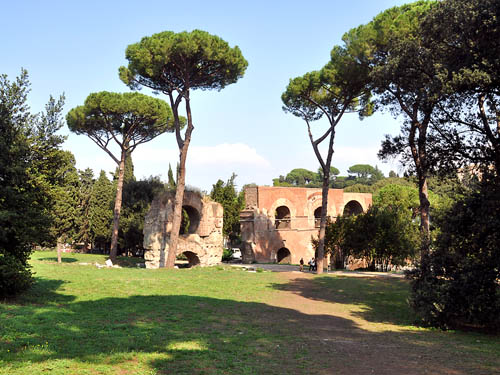 The Palatine Hill in Rome. Photo by Ferrell Jenkins.

The Roman Forum was the hub of Roman life — religious, political, economic, social. One structure of significance for the study of the life and work of Paul is the Julian Basilica — the seat of the tribunal of the centumiri, who judged civil cases. Here between the Palatine and Capitoline hills Paul probably stood trial before Caesar.

The Colosseum in Rome

The Colosseum in Rome was built in A.D. 80 by the Emperor Titus. He used 10,000 of the slaves from Judea in this work. Titus was in command of the Roman army when Jerusalem was burned in A.D. 70.

I know that this photo will make some of our tour members jealous  🙂 , but I thought I would share a photo I made of the Colosseum Friday afternoon. You may recall that our group visited the Colosseum and Forum in the rain a week ago. 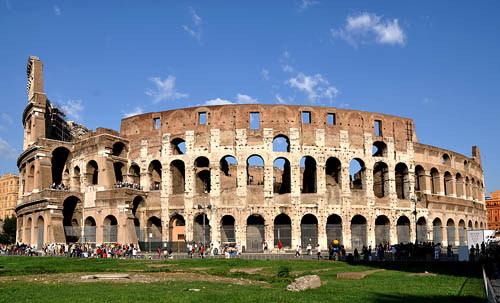 The Colosseum in Rome. Photo by Ferrell Jenkins.

It is true that Christians were persecuted and even put to death in Rome, but there is no evidence that this occurred in the Colosseum. The persecution under Nero took place in the Circus of Nero. That is where St. Peter’s now stands. The persecution in the days of Claudius took place at least 30 years before the Colosseum was built. Luke describes Paul’s first visit to Corinth,

After these things he left Athens and went to Corinth.  And he found a Jew named Aquila, a native of Pontus, having recently come from Italy with his wife Priscilla, because Claudius had commanded all the Jews to leave Rome. He came to them,  and because he was of the same trade, he stayed with them and they were working, for by trade they were tent-makers. (Acts 18:1-3)

“And thus we came to Rome”

Luke records that he and Paul found some brethren at Puetoli and remained for seven days. By this time the prisoner on behalf of the Gentiles had made such a good impression that he is allowed considerable freedom. Then he says, “and thus we came to Rome” (Acts 28:14 NAU). He hastens to add that brethren from Rome came south to meet them.

And the brethren, when they heard about us, came from there as far as the Market of Appius and Three Inns to meet us; and when Paul saw them, he thanked God and took courage. When we entered Rome, Paul was allowed to stay by himself, with the soldier who was guarding him. (Acts 28:15-16 NAU)

Under considerably different circumstances we came back to Rome yesterday after being away for five days. The brethren here invited me to speak last Sunday and again on September 27.  Yesterday and today we had wonderful sunny weather for photographs. I will share a few of the photographs that we were able to make.

Rome was founded about 753 B.C. on the banks of the Tiber River. Here is one of the many views of the Tiber that one may see in Rome. 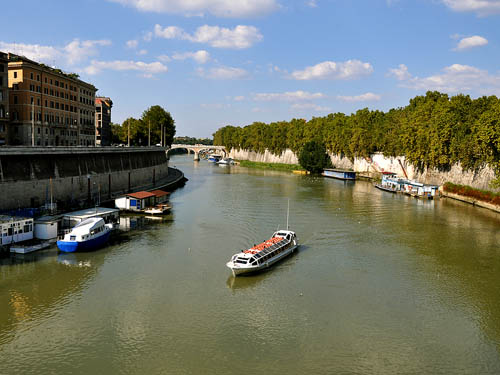 The Tiber River in Rome. Photo by Ferrell Jenkins.

Rome once ruled the world. In the days of Caesar Augustus something happened in far away Palestine that would really change the Roman world and more.

Now in those days a decree went out from Caesar Augustus, that a census be taken of all the inhabited earth. (Luke 2:1 NAU)

Statues of Roman Emperors may be seen all over the city of Rome. This one shows Emperor Augustus across from the Roman Forum. 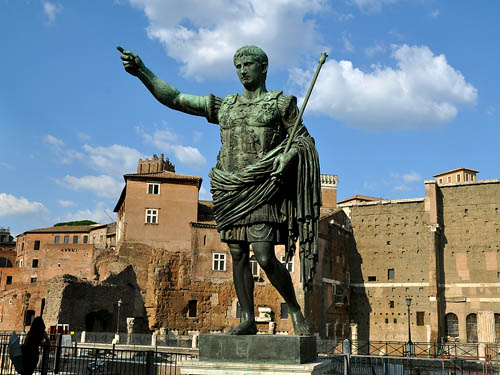 This morning I visited with my friend and former student,  Stefano, as we had opportunity to visit the Appian Way and a few other sites in Rome. Stefano grew up in Rome. He spoke about how, as a kid, he played ball beside the ancient walls of Rome with no thought of the historical importance of the ruins. Now, of course, it is different. We thought about the Apostle Paul and the difficulties he faced in coming to Rome. And we discussed the work of the Lord in Italy and in America. I had lunch with Stefano and his parents, Sandro and Elisabetta.

Here is a view of the Appian Way south of Rome. There is every reason to believe that Paul traveled this road. I have made this photo a little larger because I know that many teachers and preachers would like to use it in teaching the book of Acts. Just click on the photo for the larger version. 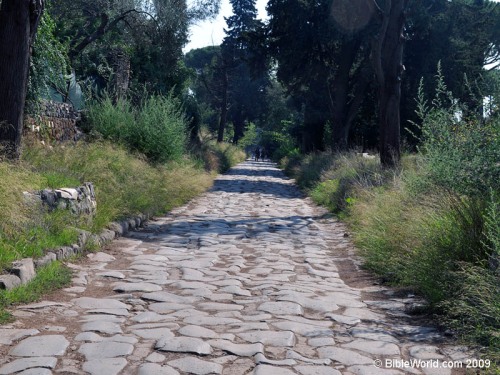 Paul traveled the Ancient Appian Way to get to Rome. Photo by Ferrell Jenkins.

Here is a nice map from BibleAtlas showing the location of Rhegium on the toe of Italy, and Syracuse along the eastern coast of Sicily. Check BibleAtlas.org for more information, a larger copy of this map, and other maps. 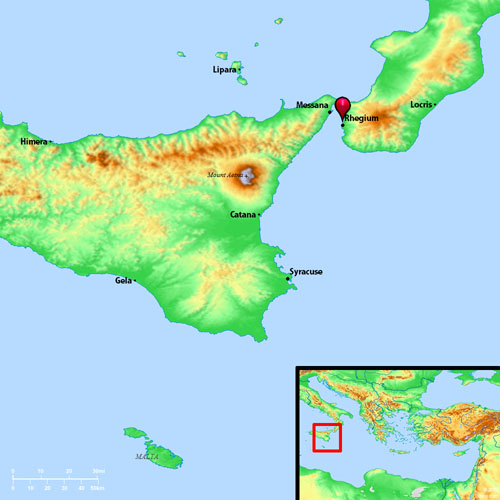 The location of Rhegium and Syracuse. BibleAtlas.org.