Perhaps the most memorable event of Timnah recorded in the Bible is that of the affair between Samson and a Philistine woman.

Samson went down to Timnah, where a Philistine girl caught his eye. (Judges 14:1 NET)

Delilah, the most famous of Samson’s three wives, is said to have lived in the Sorek Valley, but Timnah is not specifically named (Judges 16:4).

The LORD had commanded Israel not to become involved in mixed marriages with the people of the land (Exodus 34:16; Deuteronomy 7:3). But Samson had the misfortune of living too close to the border of Israel’s enemies, the Philistines. And he lacked the determination to abide by the commands of the LORD.

There were other significant events associated with Timnah. Here is a brief list.

Timnah is identified with Tel Batash in the Sorek Valley, about 4 miles northwest of Beth-Shemesh. Ekron (Tel Miqne) is about 3½ miles west of Timnah. The Sorek River flows past both cities on its way to the Mediterranean.

Tel Batash was excavated by New Orleans Baptist Theological Seminary for three seasons (1977-79). Between 1981-89, the site was excavated under the direction of George L. Kelm of Southwestern Baptist Theological Seminary and Amihai Mazar of Hebrew University. The site was occupied from the Middle Bronze IIB (18th or 17th centuries B.C.), through the Late Bronze Age and the Iron Age. In Iron Age I, Timnah was a Philistine city.

Kelm and Mazar wrote Timnah A Biblical City in the Sorek Valley (Eisenbrauns 1995) to provide a report of their excavations.

Timnah is off the beaten track and very few people visit it. Easy routes to the site have been blocked by the farmers in the Valley. Leon Mauldin and I searched for, and eventually located, Timnah in the rich alluvial Sorek Valley in 2011. Unlike Lachish, Mareshah, Gath, or Azekah the tel is unimpressive. 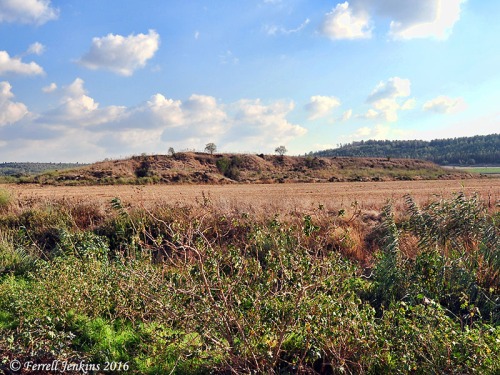 Timnah, on the southern bank of the Sorek, in August, 2011. Photo by Ferrell Jenkins.

In 2013 our friends Trent and Rebekah Dutton were trying to locate Timnah when they saw two shade tents and the Israel Antiquities Authority flag on a small rise in the fields. The IAA was doing some work at the site and explained to them the restoration work they were doing. Here is a photo the Dutton’s shared of the reconstructed Oil Press from the 7th century B.C. See Kelm and Mazar, pp. 150-152, for the way this looked at the time of the dig. An architect’s (Leen Ritmeyer) drawing of the installation is found on page 87. Some finds are intentionally covered by the excavators at the end of a season or the completion of a dig. This appears to be one such example.

Earlier this month Leon and I had the opportunity to fly over the Sorek Valley. I don’t think our pilot had ever seen the site before, but our previous experience on the ground, Google earth, and the excavation report allowed us to locate it from the air. 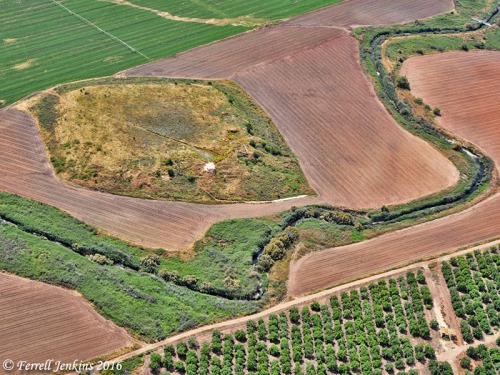 Aerial view of Timnah and the Sorek (April, 2016). Photo by Ferrell Jenkins.

I think the little white building covers the Oil Press installation. After a quarter of a century the excavated areas are now covered with natural growth.

It is a long story, but this is where Samson met his first Philistine wife, and maybe another. There is always a danger when one lives too close to the border.

If you do not already have Brad Gray’s Make Your Mark: Getting Right What Samson Got Wrong

, now might be time to take a look at our earlier review.

My late friend and colleague, James Hodges, served as an Area Supervisor at Timnah in 1977.

The shepherd and his sheep

When my traveling friend Leon and I left Jerusalem last Saturday the temperature reached a high of about 82 degrees. On the way to Tiberias we began to notice that the sky was hazy; it was filled with sand coming up from the south. This wind is known as the hamsin. The sand could be seen on the cars.

This morning we noticed that the sunrise would not be visible over the Sea of Galilee. When I checked the weather online, I found that a slow-moving storm was bringing flash floods (from the west) throughout the Mid-East. The weather yesterday in Galilee was hot, but this morning it was chilly – in the low 50s.

As we drove south through the Jordan Valley to Jerusalem we had periods of rain, and periods of beautiful sky and brilliant colors. As we approached Jericho we even had rain falling in the wilderness. This is a rare event.

The light rain settled the dust and made the landscape more photogenic. Here is a photo I made of a shepherd leading his sheep in the wilderness. Notice the heavy clouds to the East.

When we arrived in Jerusalem about 5 p.m. the temperature was 58 degrees. 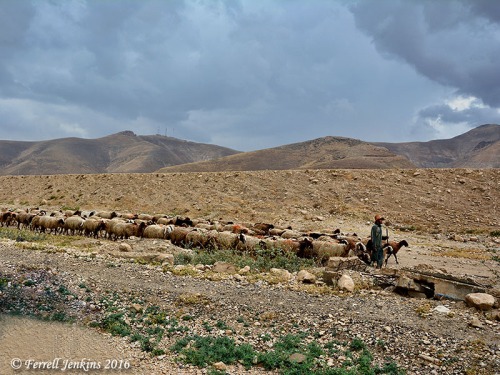 A shepherd leads his sheep in the wilderness. Photo by Ferrell Jenkins.

The analogy of shepherd and sheep is used throughout the Bible. Psalm 23 is familiar even to many non-religious people.

1 The LORD is my shepherd; I shall not want.
2 He makes me lie down in green pastures. He leads me beside still waters.
3 He restores my soul. He leads me in paths of righteousness for his name’s sake.
4 Even though I walk through the valley of the shadow of death, I will fear no evil, for you are with me; your rod and your staff, they comfort me. (Psalm 23:1-4 ESV)

A glimpse of the River Jordan

The Jordan River is shy, rarely revealing very much of itself. As we travel in the Jordan Valley from the Sea of Galilee to the Dead Sea we only see the river on a few occasions. Even then we only see short distances.

The photo below is one I made yesterday about 12 km. south of the Sea of Galilee. You can see the dirt road on the Israeli side of the border and the River in Jordan.

The Jordan River flowing into Jordan for a short distance. Photo by Ferrell Jenkins.

I have been unable to post very much while traveling in Israel, but the mother of my favorite grandson said I should be posting more. She knows how to get things done.

A level of interest never imagined for the blog

Sometime earlier today while our group was driving through the Shephelah (low land, or hill country) of Israel the stats for this blogged rolled over past two million (2,000,000). When I first started the blog, just to inform folks back home that those traveling with me were doing well, I was pleased with 70 or 80 hits a day. I don’t know how reliable these statistics are, but they sound nice.

Thanks for readers who check in from time to time and find something useful here.

As a small token of my thanks I am sharing a photo I made yesterday morning among the ruins in the Old City of Jerusalem near Dung Gate.

Flowers growing among the ruins in the Old City of Jerusalem near Dung Gate. Photo by Ferrell Jenkins.

Many readers will think of the statement of Jesus:

Consider the lilies, how they grow: they neither toil nor spin, yet I tell you, even Solomon in all his glory was not arrayed like one of these. (Luke 12:27 ESV)

The NET Bible uses the term flowers instead of lilies. A Translator’s Note says,

Traditionally, “lilies.” According to L&N [Louw-Nida] 3.32, “Though traditionally kri,non has been regarded as a type of lily, scholars have suggested several other possible types of flowers, including an anemone, a poppy, a gladiolus, and a rather inconspicuous type of daisy.” In view of the uncertainty, the more generic “flowers” has been used in the translation.

I observe that Bauer (Arndt-Gingrich-Danker) comments:

in this connection the principal opinions include the autumn crocus, Turk’s cap lily, anemone, or gladiolus, but the data do not permit certainty. Perh. Jesus had no definite flower in mind, but was thinking of all the wonderful blooms that adorn the fields of Galilee.

Enjoy the beauty and think of God’s care for you. A larger image is available by clicking on the photo.

Our journey is Israel is now beginning the second half. We enjoyed a beautiful day in Jerusalem visiting sites related to the Bible. This is an especially significant tour for me. It is my 50th Anniversary tour. The first one  that included Israel was in 1967. Overall it is the 84th tour that I have directed.

Our group this year comes from Florida, Alabama, Georgia, Indiana, Missouri, Texas, Oklahoma and Guatemala. I think eleven of us have traveled together before.

Nothing compares to studying the Bible in the land where it was written and where the events described in it took place. I am thankful to have shared this experience with so many over this half century.