A sarcophagus from the Tomb of the Kings

One of the things we must learn when studying antiquities is that names (designations) may not be correct. To illustrate:

The tomb of the kings in the Sheik Jarrah neighborhood of Jerusalem, near the American Colony Hotel and other newer hotels such as the Grand Court and the Olive Tree, belonged to Queen Mother Helena of Adiabene.

Here is how the facade of the tomb looked in 2008. The tomb was not open to the public but I made arrangements for our tour operator for my group to make a visit. 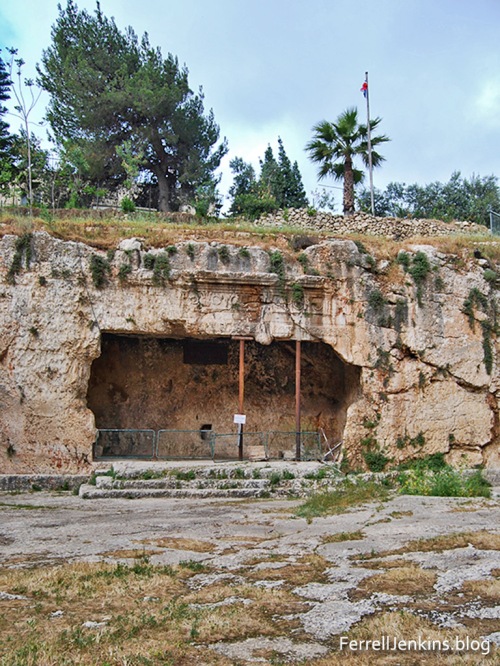 The Tomb of the Kings at it appeared in 2008. The tomb has been closed most of the time since then. Photo by Ferrell Jenkins.

A few photos have appeared in newspapers from various cities. Compare this one with the photo I made in 2008 and you will see some significant repairs. The indication is that this is now open to the public (when Covid-19 conditions permit).

Daily Hayom reports the reopening of the Tomb of the Kings. (AP Photo/Ariel Schalit)

The tomb belonged to Queen Mother Helena of Adiabene. She came to Jerusalem with her son, King Izates, as a convert to Judaism in A.D. 46. Adiabene was located in northern Mesopotamia east of the Tigris River. During the famine in Judea, mentioned in Acts 11:28-30, the queen sent to Egypt for grain and to Cyprus for dried figs (Josephus, Ant. 20.51). For more from Josephus check this post.

A large burial complex was dug north of Jerusalem for the burial of the Queen and her family. This is the tomb referred to in modern times as the Tomb of the Kings. It is a good place to see a rolling stone and a tomb hewn from solid rock. The property is under French control and was closed for many years in need of repairs to the facade.

The tomb was reopened in 2019 but I have not been able to visit since that time. When the tomb was originally excavated by Louis Felicien de Saulcy various artifacts including sarcophagi were taken back to Paris and are now displayed in the Louvre.

The following sarcophagus was identified by Saulcey as a princess of the lineage of David, the Queen Helena of Adiabene. 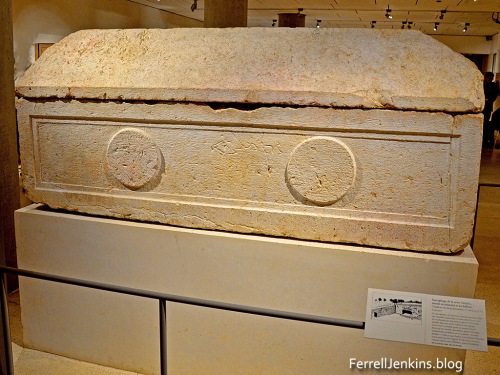 This sarcophagus, now displayed in the Louvre, was thought by Saulcey to belong to Queen Helena of Adiabene. Photo by Ferrell Jenkins.

Surely a greater percentage of tourists who have visited ancient Corinth have stopped at the Corinth Canal for a photograph. The canal was constructed between 1881 and 1893. A much smaller number probably recall that there was an ancient paved road, called the diolkos, on which smaller boats could be dragged across the isthmus.

A portion of the Ancient Diolkos at the point where the modern Corinth Canal was dug through the Isthmus. Photo by Ferrell Jenkins.

Pettigrew (Corinthian Matters) says that Strabo uses the term diolkos of the narrow land strip, rather than a physical road.

Interestingly, the modern use of the term “diolkos“ is one of the great misnomers of modern scholarship.  Strabo uses the word in a geographic sense to describe a land strip visible from Acrocorinth and equivalent to the narrowest part of the Isthmus.  No one in antiquity associated the term with the physical road.

The cargo of larger ships was unloaded and carried across the isthmus and reloaded. Ships that could be dragged across the land bridge avoided the 200 mile journey around the Peloponnesus. Nero abandoned his attempts to dig a canal across the isthmus in A.D. 67. Josephus records that 6,000 of the strongest men involved in the Galilean revolt were sent to Nero, “to dig through the Isthmus [of Corinth]” (JW. 3.540).

This view looks east to the Gulf of Corinth where a submersible bridge allows motor vehicles to cross the entrance to the modern canal. Photo by Ferrell Jenkins.

The diolkos was in use during the time Paul was at Corinth. The commercial benefit to Corinth, as well as to the port cities of Lechaion and Cenchrea, was significant.

I like these photos because because they remind me of the ministry of the Apostle Paul at Corinth (approximately A.D. 51-53).

A Google Map showing this region may be seen here.

The island of Malta is mentioned in the book of Acts as the place where Paul was shipwrecked during the voyage to Rome.

After we were brought safely through, we then learned that the island was called Malta. (Acts 28:1 ESV)

There are several natural bays and harbors at Malta that have been suggested as the place of the shipwreck described in Acts 27-28. Saint Paul’s Bay is thought by some scholars to be the place where two sea met (Acts 27:41). Several English versions follow this reading (for example: NAS, NAU, NKJ, KJV)

The new Photo Companion to theBible: Acts contains photos of all of the places where the shipwreck could have occurred.

This may be the least attractive photo I have published in this series. Why post it, you may think? It is a picture of Inscription No. 124 found at Corinth in 1898. Lacking one letter we have a reference to a MACELLV [macellum]. I knew of this inscription from my earliest tours and always showed it to my group when we visited the museum at ancient Corinth. But one year I went to the place where the inscription had been displayed and it was not there. The metal hooks which held it to the wall were still there, but not the inscription. Afterwards for several tours I asked my guide to inquire of the inscription which she also recalled seeing. At first we were told they did not know where the artifact was. On my visit in 2012 I was told that the inscription was in storage and they could not show it to me. That is the last I have heard of it. Perhaps by now it is again on display. 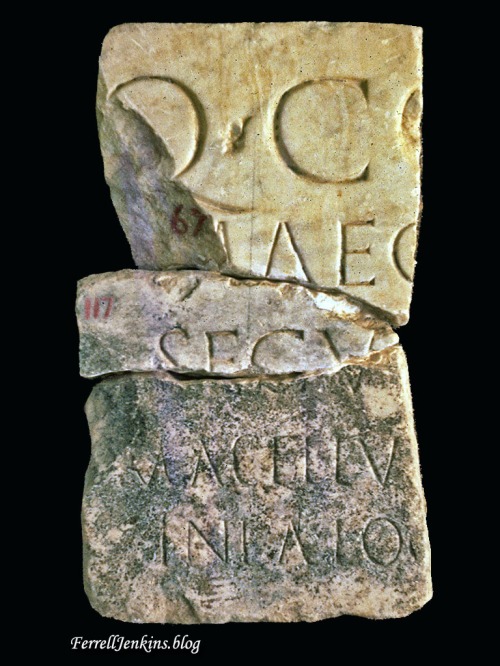 Perhaps you wonder if I am losing my mind. In fact, Henry J. Cadbury wrote about “The Macellum of Corinth” in the Journal of Biblical Literature in 1934. Putting aside 2 Timothy 4:13, which uses the word membranas (parchment), as a genuine Pauline reference, Cadbury says there are only two Latin words in Paul: praetorium (Philippians 1:18) and macellum (1 Corinthians 10:25).

Eat whatever is sold in the meat market without raising any question on the ground of conscience. (1 Cor. 10:25 ESV).

We also have an inscription from Corinth mentioning the meat market built by the family of the Cornelli and another mentioning Lucius butcher. All of these inscriptions date to the Roman period. Paul was describing things that really existed during his stay at Corinth.

Not the most beautiful photo, but I am fond of it because I happened to be at Corinth at an opportune time to capture this inscription on film.

During his preaching journeys, the apostle Paul used several of the famous Roman roads. When he came to Rome as a prisoner he traveled the Appian Way (Latin Via Appia).

There we found brothers and were invited to stay with them for seven days. And so we came to Rome. And the brothers there, when they heard about us, came as far as the Forum of Appius and Three Taverns to meet us. On seeing them, Paul thanked God and took courage. And when we came into Rome, Paul was allowed to stay by himself, with the soldier who guarded him. (Acts 28:14-16 ESV) 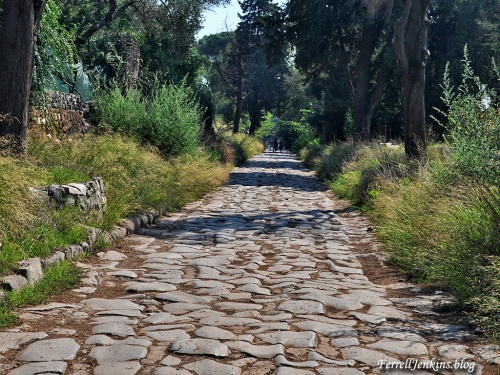 Remains of the Appian Way on the outskirts of Rome. Photo by Ferrell Jenkins.

The new Photo Companion to the Bible, produced by Todd Bolen and BiblePlaces.com, is a wonderful resource for those who teach the Bible. The first set in this series of material was on the book of Ruth. Next came the Gospels. And now we have the book of Acts.

There are more than 4000 images in this set on Acts. The images for each of the 28 chapters are included in a PowerPoint presentation with annotations explaining the image selection and background.

I could say much more about the value of this collection of material, but I suggest you go immediately to the detailed information here. You will see samples of the work and ordering information. For a limited time you can get this material at a special sale price.

The city of Hierapolis (“holy city”) is one of the three cities of the Lycus River valley named in the New Testament.

For I bear him witness that he has worked hard for you and for those in Laodicea and in Hierapolis. (Colossians 4:13 ESV).

Today Hierapolis is known as Pamukkale, Turkey. The name Pamukkale means “cotton castle” or “cotton fortress,” a name derived from the limestone formation at the site. Mellink describes the formation. He says the city,

… is famous for its continuing geological transformation. Hot mineral springs issue from the rock in the city, and the waters streaming down the cliffs have deposited limestone in large formations, the surface of which is made a gleaming white ‘frozen cascades’ (IDB II:601). 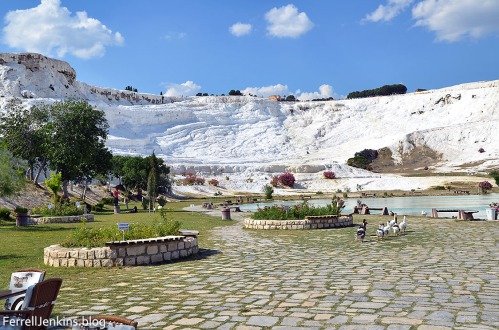 A view of the limestone cascade that has formed as a result of the warm water running over the hillside. The spring water at the source is a constant 30º celsus (95º for the rest of us). Click the photo for a larger image. Photo by Ferrell Jenkins.

Hierapolis was the home of Papias (c. A.D. 60 to c. A.D. 130), a disciple of the apostle John and a companion of Polycarp. Some traditions associate Philip with the city. All of the information at the site identify this as Philip, one of the apostles of Jesus (Matthew 10:3). Some scholars suggest the association was with Philip the evangelist (Acts 6:5; 8:5; 21:8). Wilson briefly sorts through the confusion and concludes the better evidence indicates the apostle Philip (Biblical Turkey, 245).

In the 5th century A.D. a monument called the Martyrium of Philip was built to remember the disciple of the Lord from Palestine. In the next post we will show some photographs of the ruins of the monument.