Only one example of Roman crucifixion discovered

The Romans were adept at crucifixion, according to many historical sources. The first archaeological evidence of crucifixion was uncovered in 1968 when, during a controlled archaeological dig under the direction of the late Vasillios Tzaferis, an ossuary (bone box, or receptacle) was found north of Jerusalem containing the bones of a man who had been crucified. His name was “Yehohanan, the son of Hagakol.” He is thought to have been between 24 and 28 years of age, and was about 5 feet 6 inches in height. 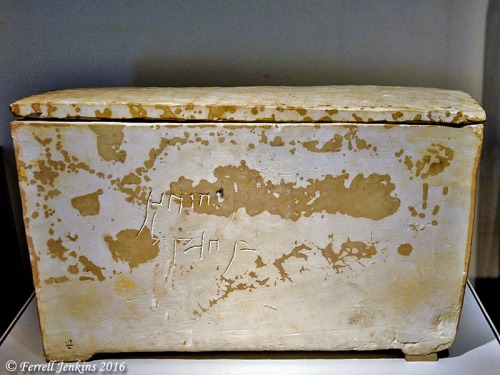 Ossuary of Yehohanan, son of Hagkol. Dates to first century A.D., and is made of soft limestone. Israel Museum. Photo by Ferrell Jenkins.

Both the ossuary and a replica of the heel bone are displayed in the Israel Museum. When Yehohanan was removed from the cross the nail pulled away from the wood. He was buried with the nail in his heel.

Ankle bone replica of  Yehohanan, son of Hagkol, who was crucified outside Jerusalem in Roman times. Display in Israel Museum. Photo by Ferrell Jenkins.

On Pentecost, Peter proclaimed the truth about Jesus. He said,

This man was handed over to you by God’s deliberate plan and foreknowledge; and you, with the help of wicked men, put him to death by nailing him to the cross. (Acts 2:23 NIV)

No ossuary or bones belonging to Jesus have been found. I am aware of the speculation that a tomb in the Talpiot neighborhood of Jerusalem contained the family of Jesus, and possibly even the ossuary of Jesus. One summary of this speculation was published by Bible Places Blog here.

The angel at the empty tomb of Jesus announced to the women who had gone to complete the burial,

He is not here, for he has been raised, just as he said. Come and see the place where he was lying. (Matthew 28:6 NET) 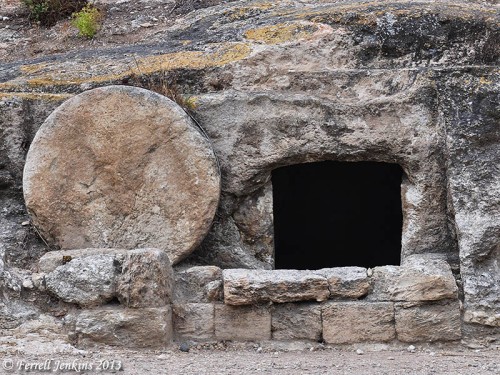 The week leading to the crucifixion & resurrection

If we consider the Gospel of John a sort of “Day Planner” for Jesus, we have nearly complete activity recorded for two weeks of the earthly ministry of Jesus. The first is in John 1:19—2:11 where activity for six of the seven days is recorded. I think the omitted day is the Sabbath. 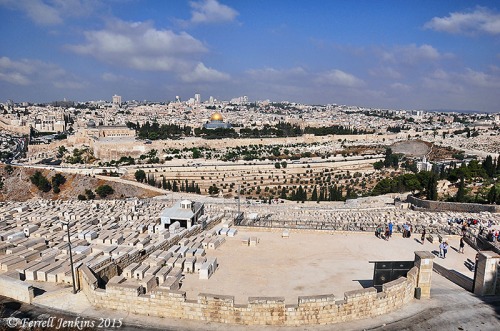 The next nearly complete week is the last week, leading up to the resurrection. John gives more attention to the last week than any other Gospel. Even here we have activities for only six of eight days. This section begins in John 12:1 and continues into John 20. Here is the way I have reconstructed it. Where John does not record the activity I have omitted the scripture reference.

The Second Temple Model at the Israel Museum shows the location of the Palace of Herod Antipas and the Praetorium of Pontius Pilate. Photo by Ferrell Jenkins.

John does not record the pronouncement of woes on the religious leaders, the institution of the Lord’s Supper, and the account of the agony in the Garden of Gethsemane.

With this sparse attention given to two weeks, no wonder John says,

Now there are also many other things that Jesus did. Were every one of them to be written, I suppose that the world itself could not contain the books that would be written. (John 21:25 ESV)

Portions of roads from the Roman period are found throughout Israel, and we have posted about several of them.

One interesting Roman road is the stepped road leading from the Valley of Elah up to Bethlehem. This photo was made 4.2 km west of Mata on Highway 375. I am not sure of the date of this unusual stretch of Roman Road, but I think most of the Roman roads date to the late first century or the second century A.D.

These steps would have made the trip up into, and down from, the mountains of Judea easier for both man and beast. This is likely the same route, centuries before the Romans controlled the area, taken by David as he went from Bethlehem to take some special provisions to his brothers on the firing line in the Valley of Elah (1 Samuel 17:15-22). Note especially verse 15:

… but David went back and forth from Saul to feed his father’s sheep at Bethlehem. (1 Samuel 17:15 ESV) 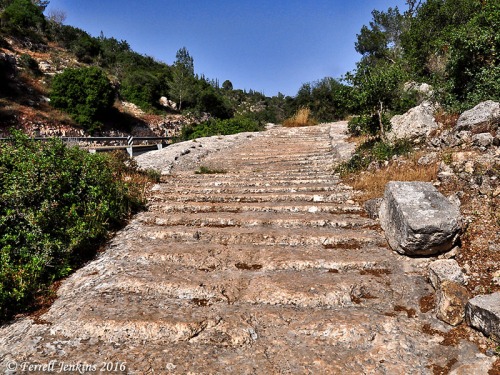 When David was in the cave at Adullam he wished for a drink of water from “the well of Bethlehem that is by the gate.”  The Biblical text records that three of his mighty men, without the knowledge of David, made their way to Bethlehem to bring him some of that water (2 Samuel 23:15-17). David refused to drink the water and poured it out to the LORD. I think the three mighty men would have used this same route.

The Dead Sea: what is deader than dead?

Haaretz, an Israeli newspaper, has a fabulous article about the Dead Sea which they call “Israel’s endangered natural wonder.” This report consists of an article, photographs, aerial footage, and an animated map showing how the Dead Sea is drying up. The article is by Nir Hasson. Use this link to access all of the material.

In 1972 the Dead Sea was about 1301 feet below sea level. This year it is more than 1407 feet below sea level. Water that once flowed all the way from Mount Hermon and the streams of both Cis-Jordan and Trans-Jordan is now being used to provide water for the population and agricultural interests.

In my photo below you will see a few of the sinkholes that have been formed in recent years. According to Hasson there were 220 sinkholes along the shore in 1996, but in 2015 the count had risen to 5,548. The water of the Sea once covered all of the area below where I was standing to make the photo.

Sinkholes along the western shore of the Dead Sea. Photo by Ferrell Jenkins.

Previously we have called attention to the photos of the sinkholes by Shmuel Browns, Israel Tour Guide. This would be a good time to take a look at them if you have not done so before. Go here.