The Galilee sunrise after a night of fishing

Sunrise on the Sea of Galilee (Lake Kinneret; Sea of Tiberias) evokes many memories of the ministry of Jesus and His disciples. No matter how many photos one takes, each one is unique.

I usually make these sunrise photos with two cameras, using multiple settings. The photo today is one that I especially like because I was able to catch the fisherman heading to harbor after a night of fishing. 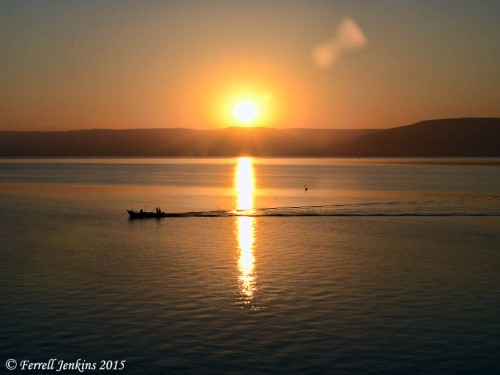 Notice this text detailing the third appearance Jesus made to His disciples after the resurrection.

1 After this Jesus revealed himself again to the disciples by the Sea of Tiberias, and he revealed himself in this way.
2 Simon Peter, Thomas (called the Twin), Nathanael of Cana in Galilee, the sons of Zebedee, and two others of his disciples were together.
3 Simon Peter said to them, “I am going fishing.” They said to him, “We will go with you.” They went out and got into the boat, but that night they caught nothing.
4 Just as day was breaking, Jesus stood on the shore; yet the disciples did not know that it was Jesus.
5 Jesus said to them, “Children, do you have any fish?” They answered him, “No.”  (John 21:1-5 ESV)

Read the rest of the story and the miraculous catch of fish in John 21:6-14.

The Arch of Titus once had a golden menorah

Many who have visited the Roman Forum have seen the Arch of Titus at the southeast of the Forum. Mark Cartwright describes the Arch in the Ancient History Encycl0pedia here. There are many links within this quotation for those interested in following them.

The Arch of is a Roman Triumphal Arch which was erected by Domitian in c. 81 CE at the foot of the Palatine hill on the Via Sacra in the Forum Romanum, Rome. It commemorates the victories of his father Vespasian and brother Titus in the Jewish War in Judaea (70-71 CE) when the great city of Jerusalem was sacked and the vast riches of its temple plundered. The arch is also a political and religious statement expressing the divinity of the late emperor Titus. 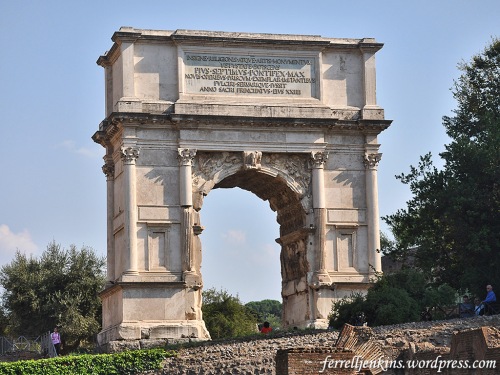 The Arch of Titus in the Roman Forum commemorates the Roman victory over the Jews in A.D. 70. Photo by Ferrell Jenkins.

The original inscription on the opposite side reads,

The inscription attributes divinity to both Vespasian and his son Titus.

One of the large panels inside the arch shows Roman soldiers parading items taken from the Temple in Jerusalem in triumph through the streets of Rome. You will see the table of showbread, and the Menorah. One of the placards carried by the soldiers mentions the laws of the Jews.

… and for the other spoils, they were carried in great plenty. But for those who were taken in the temple of Jerusalem, {c} they made the greatest figure of them all; that is, the golden table of the weight of many talents; the lampstand [Menorah] also, that was made of gold, though its construction was now changed from that which we made use of;
149 for its middle shaft was fixed upon a basis, and the small branches were produced out of it to a great length, having the likeness of a trident in their position, and had everyone a socket made of brass for a lamp at the tops of them. These lamps were in number seven, and represented the dignity of the number seven among the Jews;
150 and the last of all the spoils was carried the Law of the Jews.
151 After these spoils passed by a great many men, carrying the images of Victory, whose structure was entirely either of ivory or of gold.
152 After which Vespasian marched in the first place, and Titus followed him; Domitian also rode along with them, and made a glorious appearance, and rode on a horse that was worthy of admiration. (JW 7:148-152) 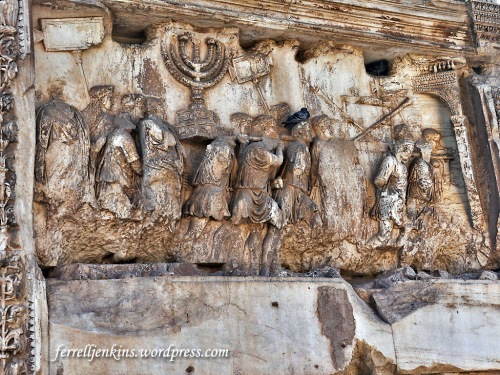 Arch of Titus relief showing Roman soldiers carrying the items taken from the Temple in Jerusalem in A.D. 70. Photo by Ferrell Jenkins.

It appears that the first soldier carrying the Menorah on his shoulder is also carrying a pigeon, perhaps for an offering.  <grin> 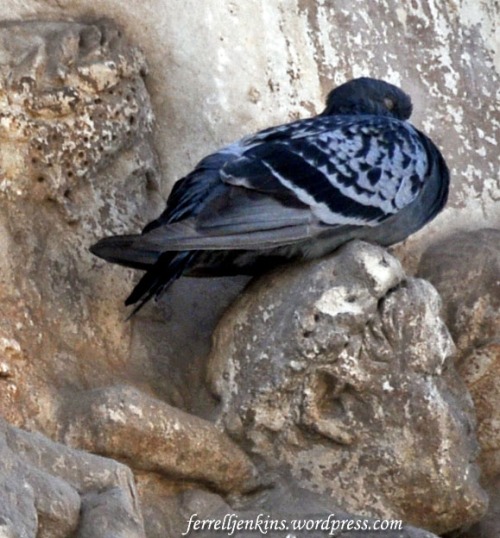 For many years Dr. Steven Fine of Yeshiva University has been pursuing his interest in the Menorah. This, of course, led him to the Arch of Titus in Rome where the Menorah is depicted. The most recent results of his study,

includes the Digital Restoration Project, which in 2012 discovered the original yellow polychromy of the Arch menorah; numerous studies of the Arch and its menorah by Professor Fine, an upcoming exhibition and international conference on the Arch organized by Yeshiva University Museum (Summer, 2017), a free online Coursera course, The Arch of Titus: Rome and the Menorah, a 2016 summer seminar in Rome under the auspices of the Schottenstein Honors Program, and courses taught in Revel, Yeshiva College and Stern College.

Take a look at the Arch of Titus in color based on the 3D scan of the reliefs here. You will find a neat video showing the spoils panel in color, and a lecture by Dr. Fine presented at New York’s Metropolitan Museum of Art. There are also links to various articles about the project.

The emblem of the State of Israel is based on the Menorah depicted on the Arch of Titus.

The view from Mount Nebo

Our photo today was made on Mount Nebo in Jordan. The view is west across the northern end of the Dead Sea, the wilderness of Judea, and the central mountain ridge (or water-parting route). 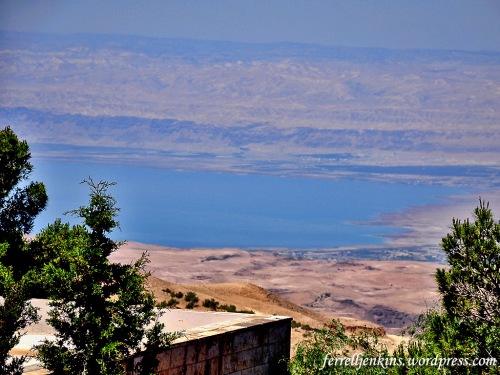 View of the Dead Sea, the wilderness of Judea, and the central mountain range from Mount Nebo in the Transjordanian Plateau. Photo by Ferrell Jenkins.

Mount Nebo is the place from which Moses viewed the land that the LORD had promised to Abraham’s seed (Deuteronomy 34:1-8).

In the next photo the northern tip of the Dead Sea is visible on the left of the photo. This photo looks NW from Mount Nebo across the Jordan Valley (the plain of Moab) and toward the highlands of the promised land. 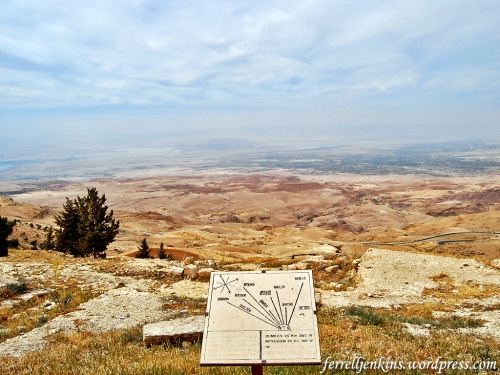 View from Mount Nebo NW across the Jordan Valley. Photo by Ferrell Jenkins.

Moses saw this and much more, and probably more clearly. Both of our photos are sized for use in PowerPoint presentations.