The Arabah: Has Tamar, Solomon’s desert fortress, been located?

The Tamar Biblical Park is located about 20 miles south of the southern end of the Dead Sea. We can suggest several reasons why the site was settled in many biblical periods. The spring at the site made it immediately attractive to travelers, and in fact the site was “the central gateway from Edom and Arabia enroute to Beershebe and Ashkelon for incense and copper trade” (Bowman, Biblical Tamar, Bible and Interpretation). 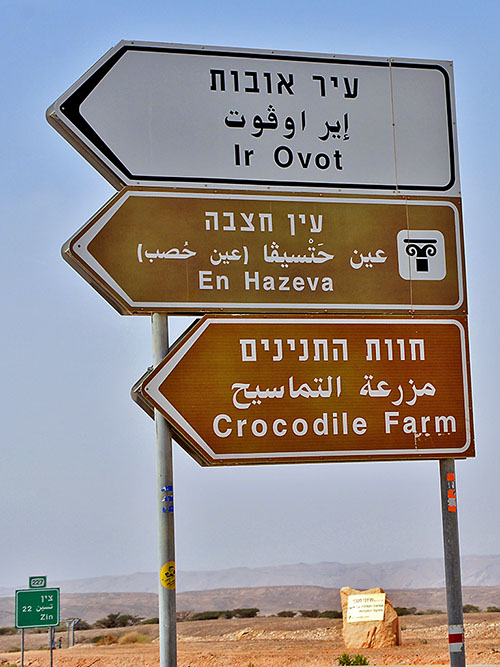 Road sign on Hwy 90 at the junction with Hwy 227. The Biblical Tamar Park is at En (spring) Hazeva. In earlier years there was a now-defunct kibbutz named Ir Ovat because the founders thought this was the site of biblical Oboth, one of the places the Israelites camped when they wandered in the wilderness (Numbers 21:10). Photo by Ferrell Jenkins.

I have a Promote GPS device which I sometimes use with my camera. If I am patient and take time for it to connect to satellites I can usually be assured of about one out of four shots showing the location as well as the elevation. The elevation here is 137 meters (about 450 feet) below sea level.

The Biblical Tamar Park is curated by a private Christian group called Blossoming Rose, but excavations were carried out under the direction of the Israel Antiquities Authority. A source tells me that the IAA did not show much interest in the site even though they acknowledge the importance of the discoveries. One can understand why a site like this which is not on the main tourist routes would be of less interest than those that are.

The Bible says that Solomon built Tamar in the wilderness.

so Solomon rebuilt Gezer) and Lower Beth-horonand Baalath and Tamar in the wilderness, in the land of Judah, (1 Kings 9:17-18 ESV)

Could this be that site? It is possible. I must be selective in the photos I present. Here goes. The first one is of a Roman period wall. There is also a large cistern dating to this period. And, yes, the Romans built a bath at Tamar.

Portion of a Roman wall at Tamar. Photo by Ferrell Jenkins.

The next photo shows the ruins of what is called the Hazeva Fort, a structure said to date to the 10th century B.C., the time of King Solomon.

Fortress dating to the time of King Solomon at Tamar. Photo by Ferrell Jenkins.

This sign shows the footprint of the fortress during various periods as well a drawing of an Edomite stone seal from the first Temple Period with Edomite writing and an incense burning scene.

Sign at Tamar showing layout of the Iron Age fortress and some artifacts belonging to the Edomites. Photo by Ferrell Jenkins.

On the right side of the sign above there is a drawing of “an incense burning utensil.” The Edomite shrine is displayed in the Israel Museum, Jerusalem. The Chronicles of the Land: Archaeology in The Israel Museum Jerusalem says,

Tangible evidence for foreign cults has been revealed at Hazeva in the Arava, where a pit containing ritual objects from an Edomite shrine was discovered. The objects, offerings brought to the shrine, had been deliberately smashed after they could no longer be used and buried in the pit. Among them were human shaped ritual stands, which may have represented the worshipers themselves. These objects highlight one of the sharp contrasts between Edomite and Judahite public worship, the latter avoiding the human image. (p.77)

Many see this destruction in the light of the reforms of King Josiah of Judah (2 Kings 23).

The ritual stands found here date to the late 7th – early 6th century B.C. Our next photo shows the display in the Israel Museum.

The next photo may show the prize of Tamar, a four chamber gate which is labeled as the Israelite Fortress Gate.

The term four-room house is a generic term which refers to a new type of house which became extremely popular and dominant during the Iron Age. The “ideal type” of this structure is a long house with four main spaces or areas: a broad room at the back, and three long spaces stemming forward from it. These long rooms were typically (though not always) divided by a combination of stone pillars and walls. The entrance was usually located in the central (long) room. Not all houses, however, follow precisely this “ideal” plan, and there is some variation, mainly in the number of long rooms. One can therefore refer to three-, four-, and five-room houses (though all subtypes are usually referred to by the name “four-room house”). Variation also exists in the form of inner division(s) of the rooms, due probably to the lifecycle of the family. Apart from this, the basic plan is quite rigid and easy to identify. (Encyclopedia of the Bible, p. 564).

Next to water, shade is one of the most important things for settlers and travelers. There is a large Jujube tree, better known by  it’s technical name Ziziphus spina-christi, Christ’s thorn Jujube. Ami Tamir includes a photo and description of this tree in his Sacred Flowers: Holy Trees & Blessed Thorns (pp. 89-92). We reviewed this Carta Guide Book here. Tamir explains how the thorns develop on the tree. 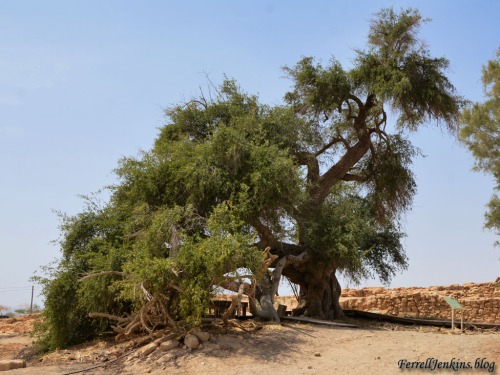 A Jujube tree (Ziziphus spina christi) at Tamar, said by some to be the oldest tree in Israel. The popular name for this tree is Thorn of the Messiah. Photo by Ferrell Jenkins.

The Pictorial Library of the Bible Lands includes several good photos of Tamar in the volume on Negev and the Wilderness. See details here.

I trust you have enjoyed our lengthy visit to Tamar Biblical Park. Our next stop is planned for Keturah where we will see the ancient palm named Methuselah.

One response to “The Arabah: Has Tamar, Solomon’s desert fortress, been located?”