As we walk south in the garden, or along the paved path, we come to an area that looks like it might have been an approach to a gate with walls on either side. Against the Ottoman city wall we see steps but no gate in the wall. The sign at this part of the wall is labeled The “Hidden” Gate which Shimon Gibson thinks is the Gate of the Essenes.

Recognizing that there are scholars who dismiss the Gospel account of the trial of Jesus, Gibson says there is reason to take a more positive approach based on recent archaeological evidence.

This chapter cautiously argues against taking such a negative approach to the subject of the trial of Jesus as portrayed in the Gospels. The basis for this conclusion is a new study I have made on the overall layout of the palace of Herod the Great, which later became the seat of the Roman governor when in residence in Jerusalem, the praetorium. My work also highlights previously unpublished archeological discoveries pertaining to the appearance of the western gateway of the palace/praetorium, which I think is the Gate of the Essenes referred to by Josephus. This monumental gateway had inner and outer gates flanked by large towers, and these gates were separated one from the other by a large, open, and paved court at its center, with a rocky area on its north. In the first century CE, the gateway undoubtedly provided direct access to the palace grounds, which incorporated palace residences, an ornamental pleasure garden, and military barracks. Remarkably, these archeological remains fit very well with John’s description of the place of Jesus’ temporary incarceration and the trial in front of Pilate, and with the two topographical features that are mentioned by him, the lithostrotos and gabbatha. (“The Trial of Jesus at the Jerusalem Praetorium: New Archaeological Evidence,” pp. 97-118 in C.A. Evans (ed.), 2011 The World of Jesus and the Early Church: Identity and Interpretation in Early Communities of Faith. Peabody: Hendrickson.)

Our photo below shows the gateway approach, the stone steps leading to a gate that is no longer there, and (to the left) a bema or sort of platform where a temporary judgment seat could have been erected. All of this area was covered with earth and debris before excavations were undertaken. 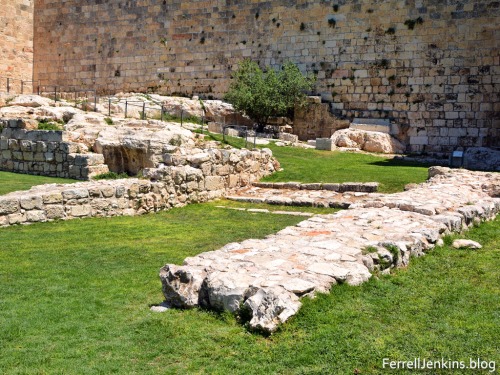 The Herodian gateway approach to the Praetorium and Herodian palace. The bema or judgment seat is the large stone to the left of the image. Photo by Ferrell Jenkins.

As we take a closer look at the steps cut into the bedrock and a jumble of stones of various periods built into the wall we realize that we need an illustration to help us understand what we have here.

The Hidden Gate built on bedrock. Photo by Ferrell Jenkins.

The sign at the site illustrates what has been found in the various archaeological excavations in the area. There was a gate here, designated as the “Hidden” Gate, which Gibson thinks was the Gate of the Essenes mentioned by Josephus.

Sign explaining the “Hidden” Gate in the west wall of the ancient city of Jerusalem. Photo by Ferrell Jenkins.

Several excavations have taken place in the general area both inside and outside the gate (see the references at the end of this article). The sources that I list at the end of the article have good drawings to show the location of Herod’s Palace and the Praetorium.

The aerial photo below begins on the left (north) with the Citadel. As we move to the right (south) we have the area of Herod the Great’s palace, then the area of the Praetorium (now known as the Armenian Garden). The gateway which is marked with a yellow circle would have been the entrance to this area. Click on the image for a larger photo.

Aerial view of the portion of the west wall under consideration. In it you will see the Citadel and the Armenian Garden. The place of the paved approach and the “Hidden Gate” is circled. Photo by Ferrell Jenkins.

Here is another aerial view made from the southeast showing the entire area from the Jaffa Gate and the Citadel to the southern wall. 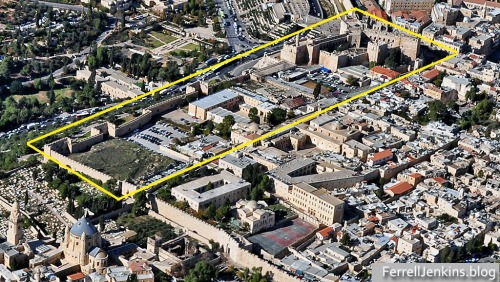 Armenian Quarter of the Old City. Photo by Ferrell Jenkins.

Our next photo shows the citadel and the palace of Herod the Great in the Second Temple model at the Israel Museum. The palace is shown with two buildings and a large courtyard between them. Gibson and others would make that area smaller as a square area. The “Hidden Gate” is approximately where the letter “g” of blog is located. Archaeologists point out that Herod’s palace was not a single building but a complex. The Roman prefect (governor) resided at Caesarea Maritima, but made his residence here when in Jerusalem (Matthew 27:2, 11, et al.).

The Herod ruling at the time of the crucifixion was Herod Antipas (Mark 6:21; Luke 3:1; 23:7). He was the son of Herod the Great who was Tetrarch of Galilee from 4 B.C. to A.D. 39. The Gospel account in Luke 23:1-12 agrees with the view that Antipas and Pilate were residing in close proximity to each other. 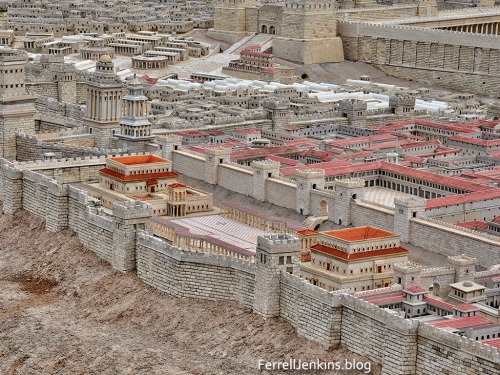 Herod’s palace depicted in the Second Temple Model at the Israel Museum. Photo by Ferrell Jenkins.

Balage (Archaeology Illustrated) has graciously allowed us to use his drawing which illustrates the viewpoint of Shimon Gibson. There are problems associated with this location. Would this be a suitable area for a crowd of Jews to gather, and how would Jesus get from here to the place of crucifixion? Gibson suggests that Jesus went back through the Praetorium. At the current time it would be easy to return to Jaffa gate and continue to Golgotha, but I do not know how easy that would have been in A.D. 33. 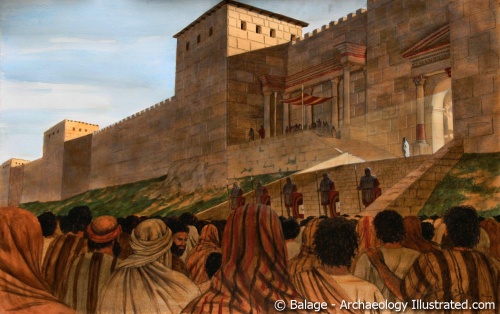 The site where Jesus stood before Pilate, according to Gibson. Art used by permission of Balage, Archaeology Illustrated.

The Gospel of John provides a fairly detailed account of the movement of Pilate when he was responsible for Jesus. John states that the Jews led Jesus from the house of Caiaphas, the priestly ruler,  to the governor’s headquarters (18:28). We understand that Pilate stayed in the Palace of Herod when he visited Jerusalem.

Since the Jews would not enter the area where the Gentile Prefect was staying, Pilate “went outside to them” (v. 29), then “entered his headquarters again” (v. 33). After questioning Jesus, Pilate “went back outside to the Jews” (v. 38), then he “took Jesus and flogged him” (19:1). I take this to mean that he took Jesus back in. After Jesus was flogged, crowned with thorns, arrayed in a purple robe, and mistreated by the soldiers, Pilate “went out again” (19:4).

At this point “Jesus came out, wearing the crown of thorns and the purple robe” (v. 4). Pilate presented Jesus to the Jews with what might have been a scoffing tone: “Behold the man!” (v. 5). When the chief priests and the officers called for the crucifixion of Jesus, and heard the charge that Jesus “made himself the Son of God”, Pilate “entered his headquarters again” (v. 9) and spoke with Jesus. Pilate was unsuccessful in releasing Jesus. When the Jews threatened Pilate with no longer being a friend of Caesar, Pilate “brought Jesus out and sat down on the judgment seat at a place called The Stone Pavement and in Aramaic Gabbatha (v. 13). Further demands for the crucifixion of Jesus prompted Pilate to deliver him over to them (v. 16).

Finally, the text says that Jesus “went out, bearing his own cross, to the place called The Place of a Skull, which in Aramaic is called Golgotha. There they crucified him, and with him two others, one on either side, and Jesus between them. (vv. 17-18).

Where was the pavement? There was a pavement at this “Hidden Gate”. To the right of the steps that led through the wall you will see a section of paving just above the yellow line I have made. You must recall that the area we have been looking at did not always have this nice manicured look. Much soil and stones had to be removed by the archaeologists as they did their work.

To the right of the bedrock steps that led through the outer wall you will see a section of pavement with a yellow line below it. Photo by Ferrell Jenkins.

The major sources I used are listed by author.

__________. “The Trial of Jesus at the Jerusalem Praetorium: New Archaeological Evidence.” The World of Jesus and the Early Church: Identity and Interpretation in Early Communities of Faith. Ed. C. A. Evans. Peabody: Hendrickson, 2011. 97-118. *This paper is also available on Gibson’s page at Academia.edu.