This post is a sort of addendum to the two previous posts on the Walls Around Jerusalem National Park.

David McClister, head of the Biblical Studies department at Florida College, and I have discussed what we called the Shimon Gibson Site several times in the past few years. We corresponded after he was on his way to Israel for a tour. I was aware that I needed better photos for a couple of points of the discussion about the possible location of the judgment seat at a place called The Stone Pavement and in Aramaic Gabbatha. You may want to glance over the two previous posts to understand the importance of these photos.

From Israel, David sent me the photos I needed.

My photos did not show clearly enough the rock formation where Gibson thinks the bema where Jesus stood before Pilate was located. The site was included in my photos, but not as clearly as I wished.

On one of my photos I had marked the place of a pavement that once covered the area. Remember that archaeology is a systematic destruction. In order to reach the level below the pavement, the pavement must be removed. In this case a few paving stones remain to be seen. 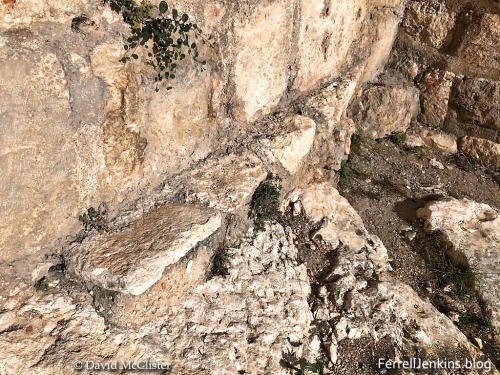 This photo shows a section of a pavement area. Photo by David

The next photo more clearly shows the area of the judgment seat or bema. Gibson thinks this matches the descriptions given in the Gospel accounts. A couple of steps remain. The thought is that the Prefect would set up a canopy and judge from this place.

To the south (right) of the steps we see in the photo above, there is what looks like a column base that Kramer says was found near where the young lady is standing. This stone does not have a cup in it as we will see at Dan, but it may have held a post of some sort to support a canopy.

A carved stone piece that looks like the base of a column. Photo by David McClister.

In lecturing to his group, Kramer reminds them of the podium at the inner gate of Dan where the king or a judge might sit to hear issues brought by the people .

According to Avraham Biran this is where a judge or king could site under his canopy. The stone base, one of four, was used to hold one of the posts of the canopy. Photo by Ferrell Jenkins.

A now-faded display sign at the gate of Dan illustrates what might have happened at this place. In a different incident King David is said to have taken his seat in the gate to receive the people.

Then the king arose and took his seat in the gate. And the people were all told, “Behold, the king is sitting in the gate.” And all the people came before the king. Now Israel had fled every man to his own home. (2 Samuel 19:8 ESV)

Sign in the gate of Dan illustrating the purpose of the podium that was uncovered there. Photo by Ferrell Jenkins.

Carl Rasmussen includes a painting by Balage and a photo taken when a canopy was in place over the podium at Dan. See his Holy Land Photos site.

You will notice a difference in the bases where poles to hold the cover over the monarch may have been placed, but we are talking about two different periods – one from the Iron Age of Israel and the other from the Herodian Roman period.

Hopefully these photographs will help us to understand more clearly what happened at this place.

My thanks to David for his extra effort in getting the photos I needed.