Moments ago someone recorded hit number 400,000 for this blog. Your words of appreciation are greatly appreciated. In the past few weeks, while traveling on the West Coast, numerous people told me they found the posts helpful. The comments left on the blog, and the Emails received are also appreciated. 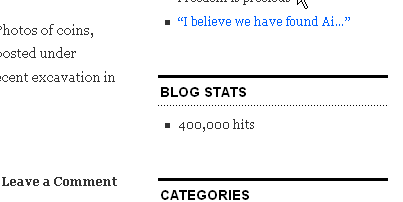 As a marker of this milestone I am posting a photo I think many of you will be able to use in the Bible classes you teach. Click on the photo for a larger image suitable for use in PowerPoint. 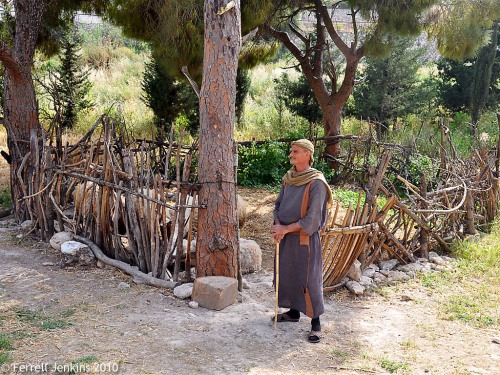 Shepherd and sheepfold at Nazareth Village. Photo by Ferrell Jenkins.

It provides a good illustration of the teaching of Jesus in John 10.

“Truly, truly, I say to you, he who does not enter by the door into the fold of the sheep, but climbs up some other way, he is a thief and a robber.  “But he who enters by the door is a shepherd of the sheep. “To him the doorkeeper opens, and the sheep hear his voice, and he calls his own sheep by name and leads them out. (John 10:1-3 NAU)

“Rare coin bears good tidings for UNO’s Israeli excavations” is the headline for an article by John Keenan in the Omaha World-Herald.

Dr. Rami Arav, of the University of Nebraska Omaha, is the director of the excavation at et-Tell in Galilee. I’m sure it wasn’t necessary for the reporter to say that Arav was excited when Alexis Whitley, one of the volunteers at the dig, found a gold coin dating to the mid-second century A.D.

The find was unexpected because Bethsaida primarily was home to humble fishermen, he said. Arav said somebody must have been doing good business a little more than 100 years after the birth of Christ.

The gold coin, about three-quarters of an inch in diameter, carries the image of Antoninus Pius, the 15th Roman emperor, who reigned between A.D. 138 and 161.

“Before newspapers, coins fulfilled the job of disseminating information. In our case, Antoninus wanted to announce that the Senate designated him to the position of a consul for the second time. This position was among the highest at Rome.”

Arav thinks this is the first Antoninus Pius gold coin excavated in Israel. I like the fact that he gave credit to the young volunteer who discovered the coin.

“This type of a coin was never sold in the market because it is so rare,” he said. “It may go for as much as people will be able to pay for it.”

For now, the coin — along with the rest of the Bethsaida finds, considered to be the heritage of the State of Israel — will go to the Israel Antiquities Authority. Its ultimate destination probably will be the Israel Museum in Jerusalem, Arav said.

“Bethsaida has already enriched the Israel Museum with a few other outstanding and rare finds.”

The article in its entirety may be read here.

Bethsaida is mentioned in the New Testament as the place where Jesus healed a blind man (Mark 8:22-25). Not everyone agrees with Dr. Arav’s identification of et-Tell as Bethsaida, where he has been working for nearly a quarter of a century. See a previous post about Bethsaida here.

A report of the Bethsaida 2010 excavation is posted here. Photos of coins, including the gold coin, and items associated with fishing are posted under Special Pics. Shai Schwartz has posted 234 photos from the recent excavation in his Picasa album here.