Excitement in the Shephelah

Luke Chandler hands out a teaser about “Fantastic (somewhat secret) new finds at Khirbet Qeiyafa” here. Whether his “Best case scenario” or the “Alternate scenario” turns out to be correct, there are discoveries that date to the Early Iron Age (about 1200 to 900 B.C.).

BBC is filming a documentary including Khirbet Qeiyafa and Gath. Luke posts a larger photo showing the BBC team with Dr. Yossi Garfinkel, director of the excavation, at the western gate. I recall that National Geographic did some filming there last year.

Earlier, the BBC team had been at Tell es-Safi/Gath with Professor Aren Maeir. The interviewer (in green) is Dr. Francesca Stavrakopoulou, a biblical scholar from Exeter University in the U.K. With a doctorate from Oxford, she worked at Tell es-Safi three years ago. 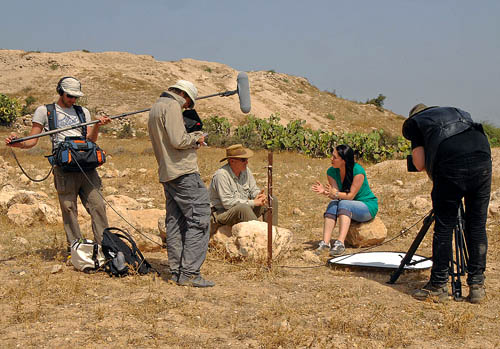 Aren describes today at the dig as “Just another fantastic day…” I will leave it for you to check out the other photos and a sketch of some of the discoveries of the day here. One thing that relates to what we posted earlier is about evidence of metallurgy at the site. Maeier says,

Adi and Naama continue to uncover additional evidence of metallurgy, apparently both Iron and Copper production!

Both Khirbet Qeiyafa, overlooking the Valley of Elah, and Gath, have a connection with the account of David and Goliath (1 Samuel 17).