Several weeks ago I added a link to the Kinneret Regional Project on the Bible Places page of the Biblical Studies Info Page. My intention was to write about the project and show a photo of Tel Kinneret (Kinrot; Arabic Tell el-‘Oreme) on the northwestern shore of the Sea of Galilee.

Now word comes of the discovery of a fourth century synagogue at Horvat Kur, about a mile northwest of Tel Kinneret. The press release here says that the discovery “adds new evidence [along with the synagogues at Capernaum, Chorazin, Kh. Hammam, and Magdala] for a very tight net of synagogues in a relatively small area on the Northwestern shores of the Lake of Galilee.”

Todd Bolen created a map using Google Earth to identify Horvat Kur, Tel Chinnereth (Kinneret), Tabgha, Mount of Beatitudes, Cove of the Sower, and Capernaum. This great resource for studying the ministry of Christ may be accessed at the Bible Places Blog.

Earlier I mentioned that the day in early May when my group took a boat ride on the Sea of Galilee was a great one for making photos. I caught this wonderful view of Tel Kinneret from the boat. The buildings on the shore below the tel belong to Pilgerhaus Tabgha, a guesthouse operated by the German Association of the Holy Land. 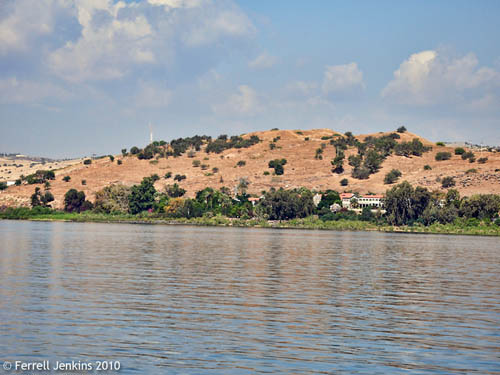 Tel Kinneret from the Sea of Galilee. Photo by Ferrell Jenkins.

From the Kinneret Regional Project site you may download several good resources. The 2004 report by Pakkala, et al., begins with this description of Tel Kinneret.

The site boasts remains from the Chalcolithic to the Ottoman period. In its heyday in the Early Iron Age, i.e. the 11th/early 10th century BCE, Kinneret developed into a regional center, controlling the surrounding region and becoming one of the most important urban sites of the country.

The body of water that we commonly call the Sea of Galilee is known as the Sea of Chinnereth in the Old Testament (Numbers 34:11; Joshua 13:27). Chinnereth is listed as one of the fortified cities of the tribe of Naphtali in Joshua 19:35.

I think most tourists to Galilee overlook Tel Kinneret. They are excited about having seen the Roman boat at Nof Ginosaur, and the guide is beginning to tell them about Taghba, Capernaum, or the Mount of Beatitudes. Or it may be because the site is obscured from the highway by the electric power station below it.

Headed for the Elah Fortress

Luke Chandler is traveling in Israel in advance of participation in the Khirbet Qeiyafa (the Elah Fortress) Excavation. He is posting some comments and photos of the places he is visiting. Take a look at Luke Chandler’s Blog.