Paris and the Louvre

Paris is known as the City of Light. From the roof of our hotel in the St. Michel area we could see some of the significant monuments. This photo, made without tripod, shows the Eiffel Tower. I think the building to the left is the Hotel des Invalides which among other things is the burial site of Napoleon Bonaparte. The building to the right is St. Germain des Prés. In the opposite direction from the hotel we had a nice view of the Cathedral of Notre Dame. 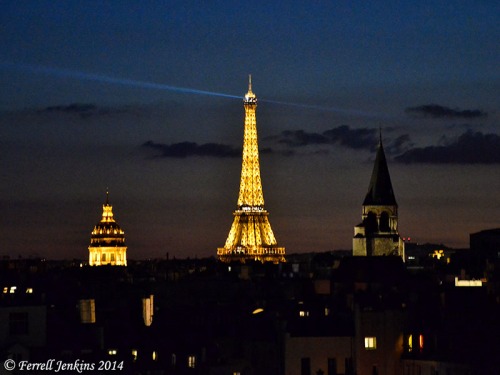 We were able to spend two of our Paris days in the Louvre. This museum displays excellent collections of archaeological artifacts from Mesopotamia, Persia (Iran), the Levant (Syria, Jordan, some sites of the current West Bank), Greece, and Rome. There is an Egyptian collection, but I do not find it as satisfactory as the other collections.

The Louvre is always closed on Tuesday and certain rooms may be closed on other days, or a half day. Years ago I learned to have two or three days in Paris in order to be able to visit all of the galleries I wanted to see. Yes, we saw the Mona Lisa, too.

The lines to get tickets for the Louvre are long. The photo below shows two of the six or more places to buy tickets, in addition to automated machines, under the great pyramid. It is best to buy tickets online or from one of the shops such as the Tourism office near the Opera. Tickets are about $20.00 per person for each day of entry. Those with tickets are able to enter through a short line while long lines wait outside just to get into the building to wait in line to buy tickets. The Museum web site explains about advance tickets under “Plan Your Visit” here. 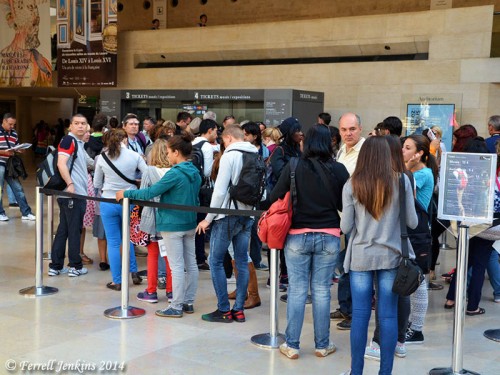 One of the ticket lines inside the Louvre. Photo by Ferrell Jenkins.

There were large crowds in the Louvre. Some galleries attract guides with tour groups. It’s fun to watch. The guide is nearly running with an umbrella or flag. The tourists are trying to keep up, but snapping their cameras or cell phones at busts they probably will not be able to identify once they are at home. I saw a young lady making a photo of the Roman Diana. I assume she had been at Disneyland Paris a day or two earlier. She did a nice job of composing her photo. When I saw her later and noted that she was a young teenager I was impressed that she wanted to visit the Louvre. 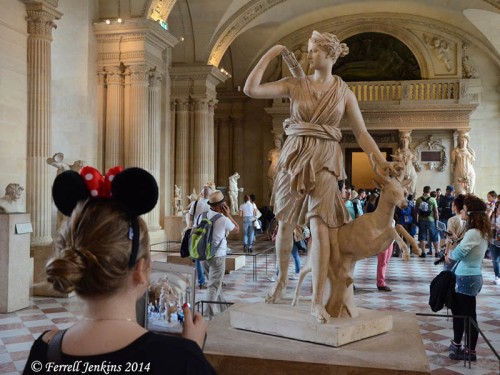 Euro Disney one day; the Louvre the next day. Photo by Ferrell Jenkins.

I have been to China, but I think most of the citizens have come to Berlin, Paris, and London to visit the museums.

Photography is permitted in the Louvre. I even made a few shots using flash when I thought it would not damage the artifact. None of the guards seemed to object. Items behind glass always create a problem for photographers. By visiting the museum two days I was able to check the first photos to be sure they were sharp. On the second day I was able to remake some of those that were not good.

4 responses to “Paris and the Louvre”