London and the British Museum

We finally reached the third of the big three museums with Ancient Near Eastern collections that we had planned to visit. We spent large portions of two days in the museum. The museum is open every day of the week. Closing time is 5:30 p.m. every day except Friday when the time is 8:30 p.m. There is no required entry fee, but a request is made for a £5 (about $8.50) or more donation.

I have emphasized the crowds in the Pergamum Museum, and the Louvre. The same was true in the British Museum. The photo below was made a few years ago at the end of September. Once school is in session one should be able to find times without hugh crowds. Many galleries have natural light that comes in. Some photos are better with the natural light and others are better with the artificial light, depending on the glare on the case. 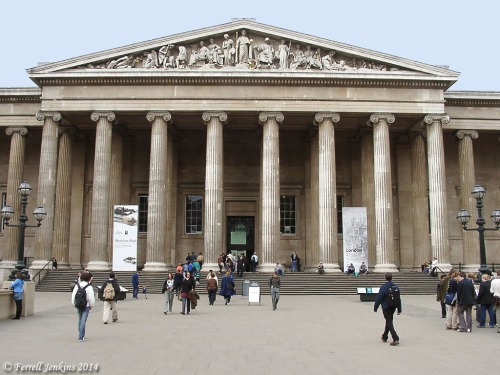 The British Museum was founded in 1753 to house the collection of Sir Hans Sloane which had been left to the nation. It is now among the greatest museums of the world.

Each of the big three museums has a specialty depending on the areas where the country has done archaeological work. The Pergamum museum is loaded with material from Mesopotamia and Turkey. The Louvre has a fabulous collection from the Levant, especially Syria, and Iran (Persia). The British Museum is big on the Levant, Egypt and Mesopotamia. All three have nice Roman and Greek galleries.

I knew that the Cyrus Cylinder had been part of a traveling exhibit for a few years. When we got near the Ancient Iran Room I told my wife that I would make a quick run to see what was there. I was delighted to see the Cyrus Cylinder prominently displayed.

Cyrus Cylinder in the British Museum. Photo by Ferrell Jenkins.

The Cyrus Cylinder is important to Bible students because Cyrus is the Persian king who allowed the Judeans to return to Jerusalem and rebuild the temple.

Now in the first year of Cyrus king of Persia, that the word of the LORD by the mouth of Jeremiah might be fulfilled, the LORD stirred up the spirit of Cyrus king of Persia, so that he made a proclamation throughout all his kingdom and also put it in writing:  “Thus says Cyrus king of Persia, ‘The LORD, the God of heaven, has given me all the kingdoms of the earth, and he has charged me to build him a house at Jerusalem, which is in Judah. Whoever is among you of all his people, may the LORD his God be with him. Let him go up.’” (2 Chronicles 36:22-23 ESV; cf. Ezra 1:1-4).

Some artifacts that I had expected to see were not on display. Cases are changed and artifacts are moved around. Sometimes there will be a sign saying that the items is on loan, being photographed, or studied. In other instances there is no reference to the removed item. One significant item that I missed seeing in its usual place is the Babylonian Chronicle that gives the date of the Babylonian capture of Jerusalem in 597 B.C. Another missing item was the Standard of Ur.

A BBC report says that the 80,000 artifacts displayed in the British Museum amount to only 1% of the artifacts held by the Museum. On several occasions I have made inquiry about an artifact and been given a time when someone would be available to show it to me.

The British Museum web site provides information about planning a visit, and it also includes an online collection with photos.

8 responses to “London and the British Museum”