The Hebrew University of Jerusalem announced today the discovery at Hazor of a sphinx fragment of Pharaoh Mycerinus. Mycerinus is the builder of the smallest of the three great pyramids of Giza in Egypt. The photo below was made facing east toward the Nile Valley. The pyramid of Mycerinus is on the right. The pyramid, built about 2500 B.C., is 204 feet high. 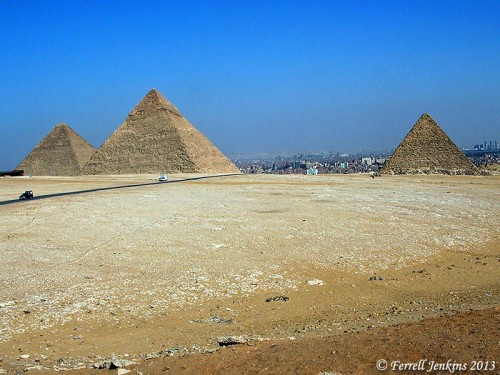 The press release from Jerusalem says,

At a site in Tel Hazor National Park, north of the Sea of Galilee, archeologists from the Hebrew University of Jerusalem have unearthed part of a unique Sphinx belonging to one of the ancient pyramid-building pharaohs. 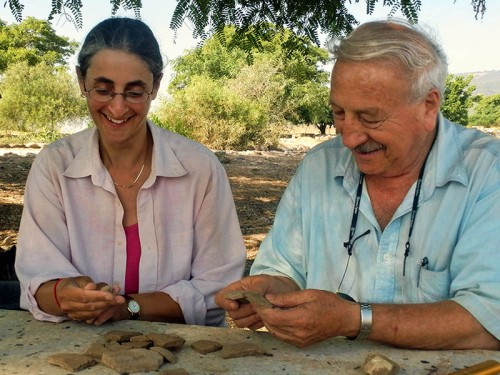 Working with a team from the Institute of Archaeology, they discovered part of a Sphinx brought over from Egypt, with a hieroglyphic inscription between its front legs. The inscription bears the name of the Egyptian king Mycerinus, who ruled in the third millennium BCE, more than 4,000 years ago. The king was one of the builders of the famous Giza pyramids.

As the only known Sphinx of this king discovered anywhere in the world — including in Egypt — the find at Hazor is an unexpected and important discovery. Moreover, it is only piece of a royal Sphinx sculpture discovered in the entire Levant area (the eastern part of the Mediterranean).

Along with the king’s name, the hieroglyphic inscription includes the descriptor “Beloved by the divine manifestation… that gave him eternal life.” According to Prof. Ben-Tor and Dr. Zuckerman, this text indicates that the Sphinx probably originated in the ancient city of Heliopolis (the city of ‘On’ in the Bible), north of modern Cairo.

The Sphinx was discovered in the destruction layer of Hazor that was destroyed during the 13th century BCE, at the entrance to the city palace. According to the archaeologists, it is highly unlikely that the Sphinx was brought to Hazor during the time of Mycerinus, since there is no record of any relationship between Egypt and Israel in the third millennium BCE.

More likely, the statue was brought to Israel in the second millennium BCE during the dynasty of the kings known as the Hyksos, who originated in Canaan. It could also have arrived during the 15th to 13th centuries BCE, when Canaan was under Egyptian rule, as a gift from an Egyptian king to the king of Hazor, which was the most important city in the southern Levant at the time.

Hazor is the largest biblical-era site in Israel, covering some 200 acres, and has been recognized as a World Heritage Site by UNESCO. The population of Hazor in the second millennium BCE is estimated to have been about 20,000, making it the largest and most important city in the entire region. Its size and strategic location on the route connecting Egypt and Babylon made it “the head of all those kingdoms” according to the biblical book of Joshua (Joshua 11:10). Hazor’s conquest by the Israelites opened the way to the conquest and settlement of the Israelites in Canaan. The city was rebuilt and fortified by King Solomon and prospered in the days of Ahab and Jeroboam II, until its final destruction by the Assyrians in 732 BCE.

Documents discovered at Hazor and at sites in Egypt and Iraq attest that Hazor maintained cultural and trade relations with both Egypt and Babylon. Artistic artifacts, including those imported to Hazor from near and far, have been unearthed at the site. Hazor is currently one of Israel’s national parks.

The Hebrew University began the Hazor excavation in the mid-1950s and continued them in the late 1960s. Excavations at the site were resumed in 1990 by Prof. Amnon Ben-Tor, who was joined in 2006 by Dr. Sharon Zuckerman, as part of the Selz Foundation Hazor Excavations in Memory of Yigael Yadin. The present excavation area is managed by Shlomit Becher, a doctoral student of the Hebrew University’s Institute of Archaeology, and is sponsored by the Israel Exploration Society (IES) in cooperation with the Israel Antiquities Authority and the Israel Nature and Parks Authority. 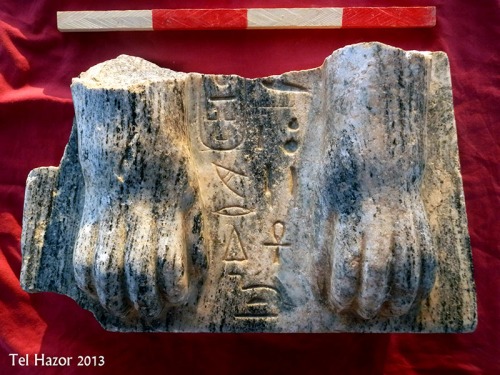 Two views (above and below) of a Sphinx statue fragment found by Hebrew University of Jerusalem archaeologists at the Tel Hazor excavations north of the Sea of Galilee in Israel. An inscription ties the Sphinx to Mycerinus, an Egyptian king and pyramid builder, circa 2500 BCE. This is the only known statue bearing this pharaoh’s name. (Photo courtesy archaeologists Prof. Amnon Ben-Tor and Dr. Sharon Zuckerman) 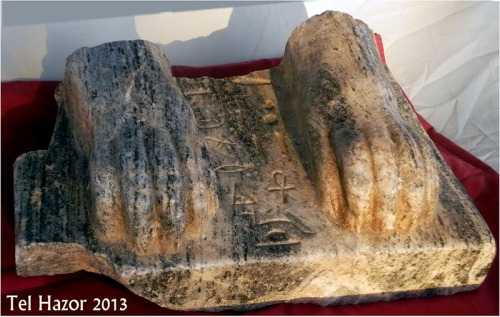 Thanks to Prof. Ben-Tor and Dr. Zuckerman for making available these nice photos. We understand better what we are able to see.