G. Walter Hansen comments on the religious life of Galatia and the importance of Zeus and Hermes to the people who lived there.

Zeus was the most widely worshipped god in Galatia; temples to Zeus were ubiquitous. Zeus was often linked with other gods. In the territory of Lystra there are carvings and inscriptions which show Zeus accompanied by Hermes. An inscription found near Lake Sugla is a dedication to Zeus of a sundial and a statue of Hermes. The names of the dedicators are Lycaonian. A stone altar near Lystra is dedicated to “the Hearer of Prayer [presumably Zeus] and Hermes.” A relief near Lystra depicts Hermes with the eagle of Zeus. In Lystra a stone carving shows Hermes with two other gods, G and Zeus. (Gill and Gempf, The Book of Acts in its First Century Setting, Vol. 2: Graeco-Roman Setting, 393)

This evidence, says Hansen, provides the setting for the events of Paul and Barnabas at Lystra. Luke describes the reaction of the Lystrans when they saw Paul heal a lame man.

When the crowds saw what Paul had done, they raised their voice, saying in the Lycaonian language, “The gods have become like men and have come down to us.”  And they began calling Barnabas, Zeus, and Paul, Hermes, because he was the chief speaker.  The priest of Zeus, whose temple was just outside the city, brought oxen and garlands to the gates, and wanted to offer sacrifice with the crowds.  (Acts 14:11-13 NAU)

Bruce reminds us that “Zeus was the chief god in the Greek pantheon; Hermes, the son of Zeus by Maia, was the herald of the gods” (The Book of the Acts, NICNT, 292).

Our photo of Zeus is of a bust displayed in the archaeological museum at Ephesus. 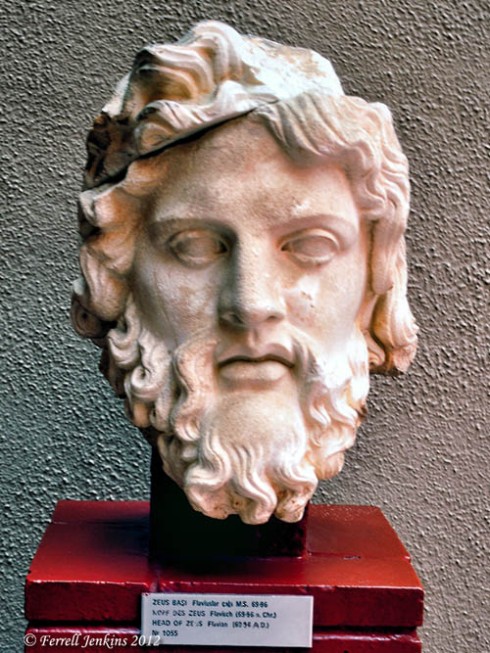 Paul was called Hermes because he was the chief speaker. Hermes was the messenger of the gods. How appropriate that our word hermeneutics, coming from the name Hermes, is used to describe the important work of interpreting the Scriptures. I have heard some speakers make fun of the word and then proceed to say that a certain phrase in the Scripture means … ! The photo below shows Hermes tying on his sandal in preparation for delivering a message. Some may recognize Hermes as the Latin Mercury, who is used as the symbol for the floral industry.

The King James Version used the Latin terms Jupiter and Mercurius in Acts 14:12. Bruce says this is “due to an old and foolish fashion of replacing Greek proper names by their Latin equivalents in English translations from the Greek.”

This post is reprinted from December 1, 2011, with improved photos.