Yesterday we called attention to the Magdala synagogue and table. We noted that it was impossible to get any good photos at the site. I didn’t even try.

We visited the site on the most recent tour, but everything is covered in a way that make it difficult or impossible to make sense of it.

Overnight I received a photo from Steven Braman who was with us on the tour. He shared a photo he made from the bus window while our guide was negotiating a visit. I had been turned away on two previous attempts to see the site. 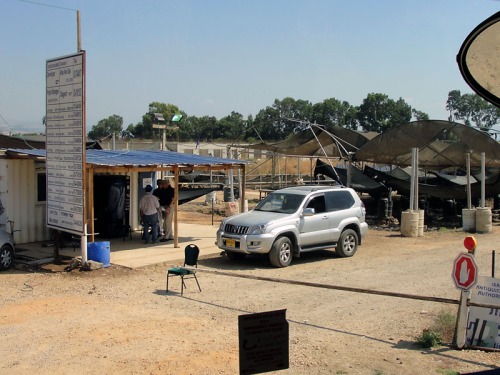 Site of the Magdala synagogue. Photo by Steven Braman.

This looks like a construction site. It is. Notice the new buildings in the background of the photo. The Franciscians, under the name Galilee Project, are building a hotel, media center, cathedral, et al. In fact, the synagogue might not have been found for decades had it not been for the construction project. Hundreds of emergency excavations are conducted each year in Israel as a result of construction projects, the widening of roads, laying of pipe lines, and improving sewer systems.

The Magdala synagogue and table

Several times in the past few years we have called attention to the site of Magdala (Migdal). In September, 2009, we noted the announcement by the Israel Antiquities Authority of the discovery of a synagogue from the Second Temple period (50 BCE—100 CE).

A synagogue from the Second Temple period (50 BCE—100 CE) was exposed in archaeological excavations the Israel Antiquities Authority is conducting at a site slated for the construction of a hotel on Migdal [Magdala] beach, in an area owned by the Ark New Gate Company. In the middle of the synagogue is a stone that is engraved with a seven-branched menorah (candelabrum), the likes of which have never been seen. The excavations were directed by archaeologists Dina Avshalom-Gorni and Arfan Najar of the Israel Antiquities Authority.

The town of Magdala is not mentioned in the Bible, but Mary Magdalene is mentioned a total of 12 times in the four gospels. This place may have been her birthplace or her home. A few late manuscripts mention Magdala (Matthew 15:39 KJV), but earlier manuscripts read Magadan. Magdala is located about 4 miles north of Tiberias on the western shore of the Sea of Galilee.

The Hebrew word Magdala means tower. In New Testament times the city had become Hellenized and bore the Greek name Tarichea because of the importance of the salted-fish industry there. Mendel Nun located a harbor at the site. He says,

“In ancient times, pickled sardines were an important element of diet throughout the country–especially for those who lived near the lake” (BAR, Nov/Dec 1993).

Josephus had his headquarters at Magdala during the first Jewish Revolt against Rome (A.D. 66-70). He was able to get a group of at least 230 boats to go from Magdala to Tiberias (Jewish Wars 2.635-637). Vespasian attacked the town from the sea and destroyed it.

We visited the site on the most recent tour, but everything is covered in a way that make it difficult or impossible to make sense of it. We are fortunate to have a photo made by Jim Joyner a few years ago. 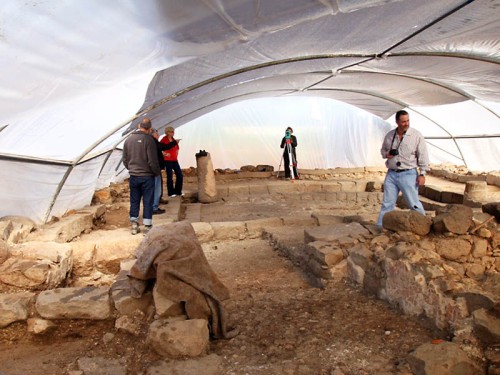 There is a replica of the “table” that was found in the synagogue at the site. The glare on the case was bad, but I followed the tip of Dr. Carl Rasmussen (Holy Land Photo’s Blog), I went to the Notre Dame Hotel and made a photo of the replica there. Since his photo, the table has been put in a case. Notice the menorah. 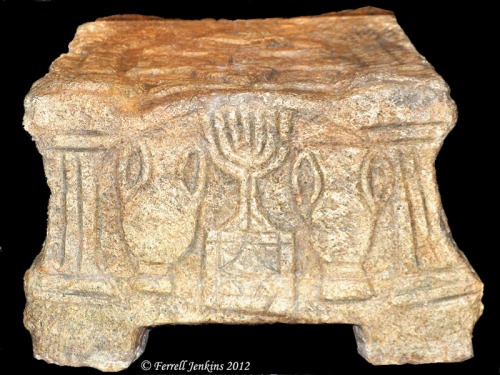 We were told at the site that the original is now in the Rockefeller Museum. Whether on display or being examined by the IAA, I do not know.