February 15 was an anniversary of the discovery of Qumran on the shores of the Dead Sea. Note the article in The Jewish Chronicle Online.

In 1949 the site was identified by European and US archeologists, and on February 15 1949 a team lead by Roland de Vaux and Gerald Lankester Harding began excavating the area. The excavations continued until 1956.

The article does not say that east Jerusalem and Qumran was part of the Hashemite Kingdom of Jordan at the time, or that G. Lankester Harding was the Director of Antiquities. He is author of The Antiquities Of Jordan

The sign in the proposed Study Room is shown below. 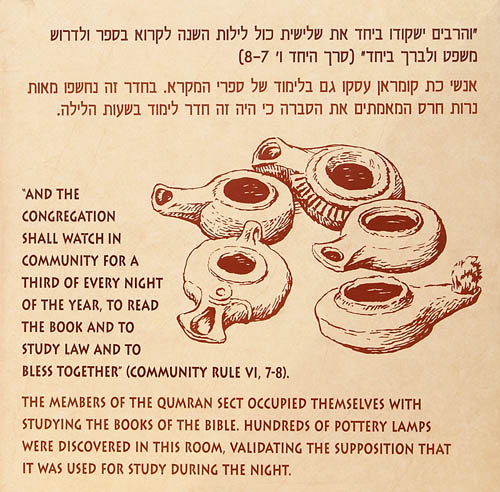 Haaretz, an Israeli daily newspaper, runs an article from 1955 about the scrolls here. It states that all seven scrolls were at that time “all seven Dead Sea Scrolls are now  in Israel’s hands.”

Haaretz added that “we have learned from reliable sources that $1 million was requested for the scrolls, but they were purchased for slightly more than $250,000,” a “bargain,” according to archaeologist Prof. William Albright, who played an important part in their acquisition.

Albright estimated the scrolls’ value at half a million dollars, and guessed that their relatively low price reflected, among other things, “propaganda by Prof. [Samuel] Zeitlin, who denied the antiquity of the scrolls, a point of view which is no longer accepted.”

We have written about Qumran and the Dead Sea Scrolls many times. Just use the search box to locate the articles, or begin here.