Byzantine church at Khirbet Midras to be covered up

The Israel Ministry of Foreign Affairs announced about two weeks ago the discovery of a Byzantine church with a mosaic floor at Hirbet [Horbat, Khirbet] Midras, a site in the Judean Shephelah southwest of Jerusalem. See the report here.

The IAA has a report here. Note this explanation about the site.

Hirbet Madras is known as the site of a large, important Jewish community from the Second Temple period until its destruction during the Bar Kokhba Revolt in 135 CE. Among the remains at the site are those of buildings, caves, agricultural installations and extensive underground hiding tunnels. The site was identified by a number of scholars as the location of a major community. Research of the site was begun in the late nineteenth century and continues until the present.

Scholarly speculation ties the church found here with the tomb of the prophet Zechariah.

We understand now that he site soon may be buried. See the Jerusalem Post report here. This may be because there is no money to prepare the site for a large number of tourists and to maintain the site. It may also be because of vandalism in the area. It was here, at Khirbet Midras, where a rolling stone tomb was vandalized a few years ago. See our earlier report here.

The photo below is provided courtesy of the Israel Antiquities Authority. 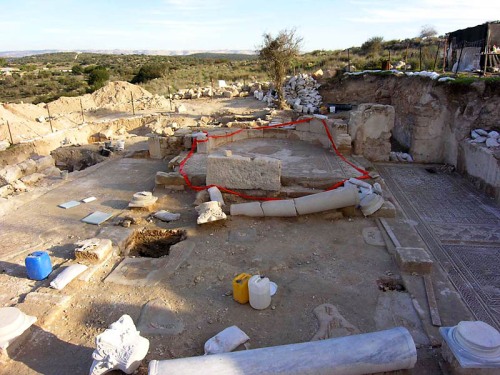 Much lies beneath the surface in Israel.