Our group heads for home

Our tour of Israel and Jordan came to an end this evening as the group went to the Ben Gurion International Airport for departure to the United States.

We visited a variety of sites today, but spent most of our time in the Shephelah (lowlands).  We are informed in 2 Chronicles about the activity of King Uzziah (792–740 B.C.) in the  Shephelah.

And he built towers in the wilderness and cut out many cisterns, for he had large herds, both in the Shephelah and in the plain, and he had farmers and vinedressers in the hills and in the fertile lands, for he loved the soil. (2 Chronicles 26:10 ESV)

Wheat fields are in abundance in the Shephelah today. 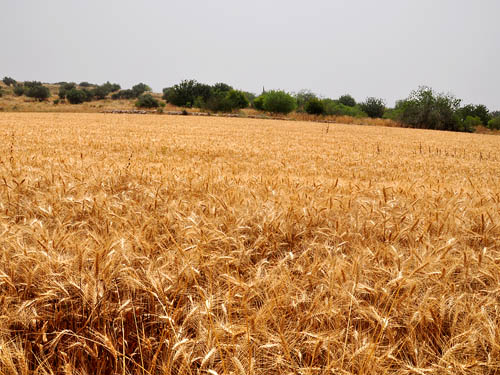 A Wheat Field in the Shephelah. Photo by Ferrell Jenkins.

Elizabeth and I said goodbye to our tour group and turned to Jerusalem. We plan to visit several more sites in Israel before returning home. By now the group should have begun their 13 hour flight home.

Update: May 11. Last evening before going to bed I began tracking the flight of our friends returning home. When I checked it this morning I noticed that they have been routed north across Turkey, Eastern Europe, and north of Iceland. The flight continued across Greenland. Now they are headed south over Canada toward the Great Lakes area. The flight is delayed by 2 hours. This is because of the Iceland Volcano. A friend returning from Greece to the USA told me a similar story about his flight.