A great day in Galilee

After breakfast our group walked to the dock in Tiberias and boarded a boat for a ride on the Sea of Galilee. At first it appeared that it might be a bit hazy on the sea. However, as we moved along the sky cleared and it turned out to be a wonderful day for photographs and teaching about the sites associated with the ministry of Jesus.

A few of the tour members have been to Israel before, but for most of them it is the first trip. It doesn’t matter how many times one comes here he/she always learns something new.

I had arranged earlier with our tour guide and tour company to have a demonstration of cast net fishing on the sea and to sail past the Cove of the Sower, the name given to the site where Jesus taught from a boat to people sitting on the shore.

Again he began to teach by the lake. Such a large crowd gathered around him that he got into a boat on the lake and sat there while the whole crowd was on the shore by the lake. (Mark 4:1 NET)

The view of the traditional Mount of Beatitudes (Matthew 6-7) was tremendous. The appearance of the hill has changed over the years. Trees have grown up around the church. A larger building, painted a light color, has made the site less aesthetically appealing. The hillside is filled with agricultural projects. Did Jesus really speak the Sermon on the Mount here? If it wasn’t here, it could not have been far away. The precise spot matters little.

The Mount of Beatitudes. Photo by Ferrell Jenkins.

We turned west and sailed to Nof Ginosar in the land of Gennesaret (the English equivalent).

After they had crossed over, they came to land at Gennesaret and anchored there. (Mark 6:53 NET)

As we approached the shore I noticed one of the ships with an interesting figurehead of a bird, and captured this photo of the Via Maris, the road that leads from Migdal (Magdala) eastward. 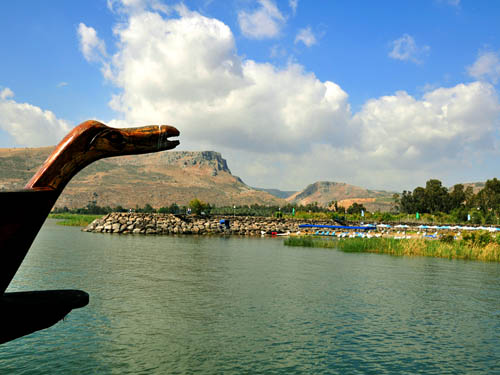 The Via Maris from the Sea of Galilee at Nof Ginosar. Photo by Ferrell Jenkins.

The Sea of Galilee is extremely low. The area where you see the blue shade and cabanas now serves as a beach. A few years ago it was covered with water.

We did a lot more today, but that’s it for tonight. Everyone in the group appears to be in good health and enjoying the experience.