Life at an archaeological dig can be fun

Luke and Royce Chandler, a couple of friends from Tampa, are participating in the dig at Khirbet Qeiyafa, a site above the Valley of Elah. It is also being called the Elah Fortress. The director of the dig, Prof. Yosef Garfinkel, thinks this is the site of Shaaraim (Joshua 15:36; 1 Samuel 17:52; 1 Chronicles 4:31).

Todd Bolen, of BiblePlaces.com has suggested the site should be identified with Ephes-dammim here, here, and here. Both places, Shaaraim and Ephes-dammim (1 Samuel 17:1) are associated with the conflict between David and Goliath. I will leave all of this for you to study as you wish.

Luke sent me a few photos to share with our readers.

Luke is standing in the “Philistia Gate” with his left foot in the Iron Age threshold. Azekah can be seen in the distance.The Valley of Elah is to the left.

Luke reports an interesting incident that happened at the dig last Wednesday.

On this final day in the room, my father leaned his hand against the wall and accidentally caused a stone to fall out onto the ground. Behind where the stone had been, Royce saw a shiny turquoise circle. We called Guy Stiebel, the area archaeologist (also the chief excavator at Masada), to see it. When Guy saw the glass he took a keen interest. It turned out to be a complete ancient glass bottle that had been placed on its side into the wall during construction. Glassware such as this is common in burial locations, but very uncommon in this situation.

Read the full account here. Luke has several photos on his site. He received permission to include a photo of the glass bottle “in situ” (the place where it was found). He has given me permission to share it with our readers. 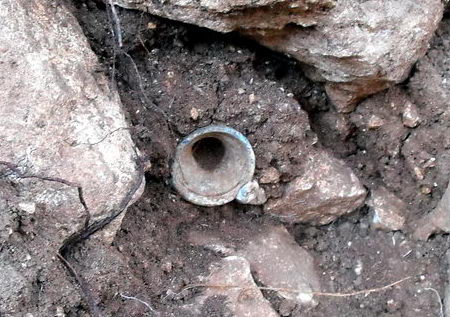 In 2008 one of the volunteers uncovered a large potsherd (broken piece of pottery) containing a Hebrew inscription. We are still awaiting a complete translation. We published a photo here.

We appreciate Luke sharing these experiences with us. By the time he and Royce get back home their wives will be expecting them to work in the flower beds!

You might also enjoy reading his account of walking through Hezekiah’s Tunnel (2 Kings 20:20), and seeing his video showing a stone from the Iron Age in the east wall of the Old City of Jerusalem, here.