We have been flying our flag since a few days before Memorial Day.

When traveling outside the United States it is fairly common to see the flag of the USA displayed in front of hotels that cater to citizens of the USA. Dozens of boats carry tourists across the Sea of Galilee from one port to another. This is an important part of our tours to give the travelers some sense of the elevation of the sea, and of the quietness of its water.

Tourist boat on Sea of Galilee. View to East. Photo by Ferrell Jenkins.

It is fairly typical of these boats to hoist a flag of the country from which its passengers come. In 2006 the boat we were on had inadvertently hoisted the USA flag upside down. The rules of etiquette for the display of the flag say that the flag should be flown upside down only as a distress signal. Fortunately we did not have a storm like the one mentioned in the gospels. Such storms still occur when the strong winds come down upon the sea from the surrounding mountains. In that case I suppose a distress signal might have been helpful.

But as they were sailing along He fell asleep; and a fierce gale of wind descended on the lake, and they began to be swamped and to be in danger. They came to Jesus and woke Him up, saying, “Master, Master, we are perishing!” And He got up and rebuked the wind and the surging waves, and they stopped, and it became calm. (Luke 8:23-24 NAU) 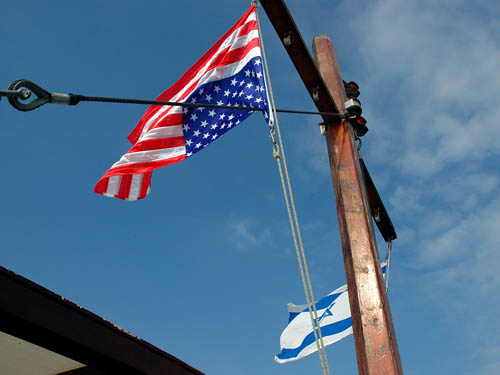 Happy fourth of July to my USA friends. Fly your flag proudly, but don’t turn it upside down!