Abraham Rabinovich, a long time writer for the The Jerusalem Post, has compiled some fascinating information about the Judeans in Babylonian Exile during the time of Nebuchadnezzar.

King Jehoiachin was only 18 years old and had occupied the throne of Judah barely three months when he was led off into Babylonian captivity in 598 BCE together with his wives, his mother, his servants, his eunuchs and thousands of “the chief men of the land.”

But what happened to them when they reached Babylon? And what happened there to the tens of thousands of others who joined them in exile when the First Temple was destroyed a decade later? The Bible tells us of the return to Judah half a century later but virtually nothing of what the expellees experienced in Babylon itself…

However, scholars have been able to gain a measure of access to these missing years from cuneiform documents unearthed in Iraq in the last century, including a trove illicitly dug up in the final years of Saddam Hussein’s regime and only now nearing publication. The documents are innocuous – business records, land deeds, tax accounts – but together are able to shed light, feeble but suggestive, on this central period in Jewish history.

Rabinovich comments specifically on the fate of Jehoiachin, the young Judean king.

“We have been able to make history out of dry documents,” says Prof. Israel Eph’al of the Hebrew University, an epigrapher and historian of the ancient Near East.

Early last century, archeologists digging in Babylon, the capital of Babylonia, uncovered cuneiform tablets in a vaulted chamber beneath the ruins of an ancient structure believed by some to have been the base of the fabled “Hanging Gardens” of Babylon. These tablets, deciphered in the 1930s by German Assyriologist Ernst Weidner, detailed the storage of oil and other commodities and their distribution. Four of the badly damaged tablets concerned the supply of oil to “Jehoiachin, king of Judah” and his five sons. The date is five years after he was taken captive. The fact that he was being provisioned by the Babylonian authorities and that he retained his royal title suggests that he was being treated with deference even though he had been taken captive because his father, Jehoiakim, had rebelled against Babylon. Favorable treatment is also suggested by the fact that at 23 he already has five sons, indicating that the young royal was not deprived of the wives who had accompanied him.

Because German archaeologists worked at Babylon for more than a decade in the early part of the 20th century, the best collection of archaeological artifacts are in the Pergamum Museum in Berlin. Here is a photo of one of the ration tablets mentioned in the article. 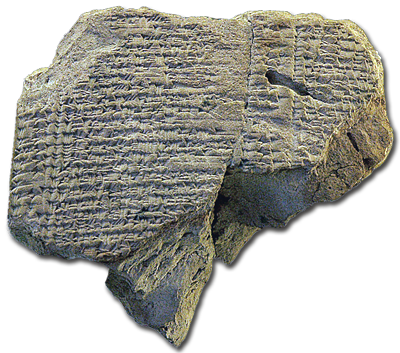 This information harmonizes with what we are told in the Bible, under  (2 Kings 25:27-30). This text describes an event some years later under the reign of Evil-merodach. Verse 30 says of Jehoiachin,

He was given daily provisions by the king for the rest of his life until the day he died. (2 Kings 25:30 NET)

Here are the dates I normally follow in the study of this part of Bible history: