Have no fear of the authorities

While reading Romans 13 I came to Paul’s admonition to the saints at Rome, ” Would you have no fear of the one who is in authority? Then do what is good.” My mind immediately turned to the mosaic which was discovered during the excavation of the Byzantine public area at Caesarea Maritima.

The context in Paul’s Epistle to the Romans reads this way.

For rulers are not a terror to good conduct, but to bad. Would you have no fear of the one who is in authority? Then do what is good, and you will receive his approval, for he is God’s servant for your good. But if you do wrong, be afraid, for he does not bear the sword in vain. For he is the servant of God, an avenger who carries out God’s wrath on the wrongdoer. (Romans 13:3-4 ESV)

The sign at the site describes the building where the mosaic was found as a Tax Archive. The original is said to be on display at the Kibbutz Sdot Yam Museum. The edifice is identified as “Byzantine government offices where clerks recorded tax revenues.”

I suppose they did not understand that this is politically incorrect!

His work has been featured on the Discovery Channel and in many scholarly books. A native Hungarian, Balage now creates images of ancient Israel, Egypt, Babylon, Greece, Rome, and other civilizations. He tell the story in these words:

I began working with archaeologists, scholars and experts in the field in the Department of Archaeology at the Hebrew University of Jerusalem, the Albright Institute, the Israel Museum, and universities throughout the United States.  My archaeological illustrations were published in National Geographic Hebrew edition,  A Guide to Jerusalem, The World of the New Testament, The World of the Old Testament, Excavating Jesus, and The Jesus Dynasty among others and many of my illustrations were part of exhibits at the Israel Museum, the Welcome Center in the City of David, Jerusalem, and permanently displayed in the Archaeology Department at the Hebrew University of Jerusalem.

Balage Balogh contacted me with the request that I offer some of his art free of charge on my web sites in exchange for a permanent link. Since I have more readers of the blog than of the web sites I decided to begin here. As time permits I will post a few more of his illustrations here and at the Biblical Studies Info Page and Bible World.

Here is a wonderful drawing of Capernaum at the time of Jesus. One need only know something about the archaeological discoveries of the first century to see the accuracy of this drawing. Notice the basalt stone and the way the roofs are constructed. A larger image is available by clicking on the drawing.

Capernaum at the time of Jesus. Art by Balage Balogh.

Take a look at Archaeology Illustrated. Balogh’s work may be purchased for use in presentations or publications. This illustration is © Balage Balogh 2010.

When the Pharisees and scribes complained that Jesus received sinners and ate with them, He told them a parable that we call the parable of the lost sheep (Luke 15:1-7).

“What man among you, if he has a hundred sheep and has lost one of them, does not leave the ninety-nine in the open pasture and go after the one which is lost until he finds it? “When he has found it, he lays it on his shoulders, rejoicing. “And when he comes home, he calls together his friends and his neighbors, saying to them, ‘Rejoice with me, for I have found my sheep which was lost!’  “I tell you that in the same way, there will be more joy in heaven over one sinner who repents than over ninety-nine righteous persons who need no repentance. (Luke 15:4-7 NAU)

“When he has found it, he lays it on his shoulder, rejoicing.” This describes the work of good shepherds and a practice that was well known to those who heard Jesus. On another occasion Jesus called Himself the good shepherd (John 10:11, 14).

The motif of the good shepherd with the sheep on his shoulder became common in later Christian iconography. Similar drawings are known from the catacombs in Rome. The four statuettes shown below date from the 4th century A.D., and are displayed in the Istanbul Archaeological Museum. 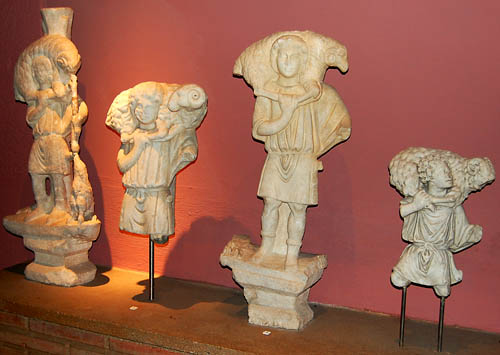 Last September I saw a special exhibit of early Christian artifacts in the Vatican Museum. The photo below shows a wonderful early 4th century statuette of the Good Shepherd. 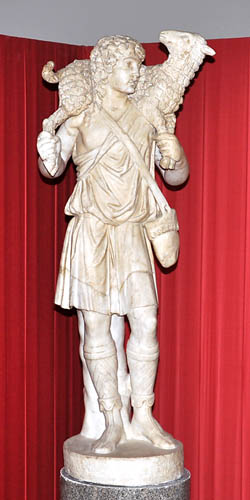 The Good Shepherd in the Vatican Museum. Photo by Ferrell Jenkins.

Because of a severe famine in Canaan, Abraham traveled to Egypt and sojourned there (Genesis 12:10). Joseph was sold by his brothers and eventually became a slave in Egypt (Genesis 37:28). Jacob and his family, at least 70 persons, went into Egypt and settled in the land of Goshen (the eastern Delta) during a time of famine in Canaan (Genesis 46; Acts 7:11-16).

What do we know outside the Bible about travel to Egypt during the Patriarchal age (the Middle Bronze age)? It is clear that foreigners traveled to Egypt. In the tomb of Khnum-hotep III at Beni Hasan, about 169 miles south of Cairo, there is a painting showing 37 Asiatics of the desert bringing gifts to Egypt and desiring trade. This tomb painting is dated to about 1890 B.C.

Here is a description of the painting given by J. A. Thompson in The New International Dictionary of Biblical Archaeology:

One picture shows thirty-seven seminomadic tribesmen from Palestine, from the land of Shutu (central Trans-Jordan), led by Absha, their chief. The men were beared, and the women used bands to hold their long hair in place. Their clothes were multicolored, the men wearing short skirts and sandals and the women having calf-length dresses, which they fastened at the shoulder by means of a clasp. Instead of sandals, the women had shoes on their feet. One of the men carried a lyre, and on one of the donkeys were two bellows, indicating that at least some members of the group were traveling metalworkers.

Egypt has many shops selling papyrus sheets. Some have tomb paintings. I am told that the Abu Simbel Papyrus store in Giza is the only one that has permission to sell a painting of the Asiatics arriving in Egypt. This looks better than any tomb painting one might see today while visiting a tomb. This papyrus painting shows only a portion of the 37 travelers making their way into Egypt. The Asiatics are wearing multicolored clothing. The person to the right in white is an Egyptian.

A portion of the Beni Hasan painting showing Asiatics arriving in Egypt.

Click on the art for a larger image that might be suitable for use in a PowerPoint presentation.