Visualizing Isaiah 10: “Assyria, the rod of my anger”

The Assyrians are first introduced in Isaiah 7. In chapter 10 we are informed that they are “the rod of [the LORD’s] anger.” They will serve the purpose of God to punish His people. Isaiah tells us that the Assyrians did not plan to be doing the will of the LORD; they only wanted to destroy many nations.

Ah, Assyria, the rod of my anger; the staff in their hands is my fury! Against a godless nation I send him, and against the people of my wrath I command him, to take spoil and seize plunder, and to tread them down like the mire of the streets. But he does not so intend, and his heart does not so think; but it is in his heart to destroy, and to cut off nations not a few; for he says: “Are not my commanders all kings? (Isaiah 10:5-8 ESV)

In the photos below I hope to illustrate a few ways the Assyrians punished the Judeans. Certainly the same was true of the northern kingdom of Israel (2 Kings 17:5-6).

The Assyrians destroyed northern cities of Israel such as Hazor and the site sometimes identified as Geshur or NT Bethsaida in 732 B.C. By 722/21 Samaria lay in ruins. Assyria continued south into Judah. Sennacherib claims to have destroyed 46 strong cities of Judea in addition to all of the nearby villages (The Taylor Prism).

Assyrian King Sennacherib left reliefs of his war against Lachish on his palace wall at Nineveh. The following photos are portions of that relief now displayed in the British Museum. Many Judeans were taken into captivity. Other begged for mercy in the hilly Shephelah of Judah.

The plea was unsuccessful for some of them. This portion shows an Assyrian commander killing a Judean. 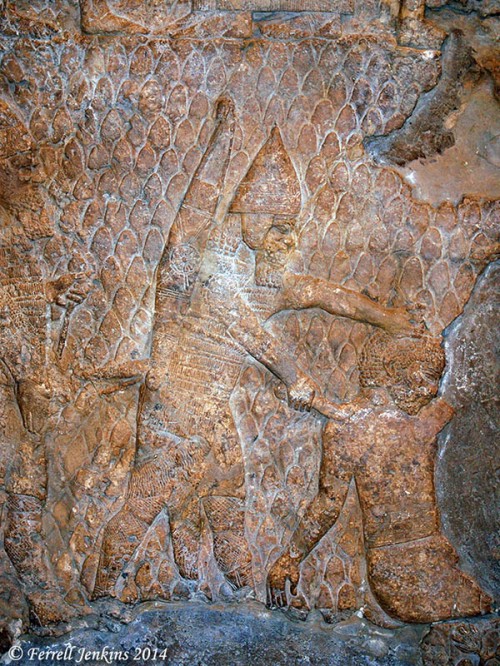 An Assyrian soldier kills a Judean. Photo by Ferrell Jenkins.

This portion of the relief shows heads of the slain being brought together for accounting. Some Egyptian reliefs show hands and other body parts being gathered for the same purpose.

Heads of Judeans being collected to get a count. Photo by Ferrell Jenkins.

2 responses to “Visualizing Isaiah 10: “Assyria, the rod of my anger””