Michael J. Kruger (canon fodder) has written a review of each episode of the History Channel’s Bible Secrets Revealed. He says the series has reminded him of two critical truths:

1. Our popular culture is prone to distort and misrepresent the teachings of the Bible. I was struck again by how sensationalistic and misleading popular-level programming can actually be when it comes to the Bible.  Although this series had some good moments, as a whole I was disappointed to see the History Channel offer the standard Da Vinci Code-style approach to the Bible.

2. The church must be equipped to respond to these sorts of critiques.  Given the high-profile nature of the History Channel (and similar style programming), the average person we are trying to reach is going to be exposed to this type of material.  And we need to be ready to offer some answers if we expect non-Christians to give the biblical message a hearing.

The six reviews cover a wide variety of topics of interest to many people.

Begin here on canon fodder for links to each of the reviews.

Kruger is President and Professor of New Testament at Reformed Theological
Seminary, Charlotte. You will find much useful material on this blog.

Çatalhöyük. Polish archaeologists have discovered containers of barley, said to be 8,200 years old from the Neolithic period, at Çatalhöyük in Turkey.

Read the report, with photo, here.

Preserving Tal Al Umayri in Jordan. Many archaeological sites are in danger of destruction. Tal Al Umayri, south of Amman, Jordan, is going to become an archaeological park. The site is on private property. Now the owners have agreed to give the land for the project. Details here.

According  to the Petra National Trust, it was visited by around 450,000 people in  2013, though this was a significant drop from 2010’s record number of 975,000 visitors. Officials hope the new museum will encourage tourists to spend more time in the ancient city. It will present the history of Petra and the Nabataeans, as well as house antiquities, but it is unclear what this means for the site’s two existing museums: the Petra Nabataean Museum, opened in 1994, and the Petra Archaeological Museum, opened in 1963. 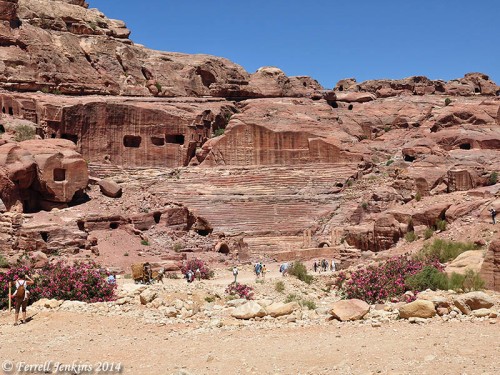 The Roman Theater at Petra. Photo by Ferrell Jenkins.

Old Testament Bibliography by Ray Clendenen. Here is the info from Charles Savelle at Bible X.

You can access Ray Clendenen’s recently revised 385-page Old Testament bibliography here. Note: you have to have an account with academia.edu to access it but if you don’t already have an account,signing up is free.

A Dictionary of the Bible. This five-volume set is now on Community Pricing at Logos. A bid of $15.00 will secure a set in Logos digital format. Information is here. 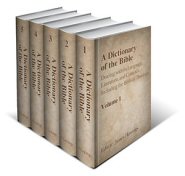 A Dictionary of the Bible, James Hastings. The work will be in digital format for use with Logos Bible Software.

It is true that this is an old work first published between 1893 and 1905, but it contains some excellent material. The five volumes contain 4,718 page. The projected price of $15 is less than you might pay for a paperback with one good idea in it.

I have owned the hardback set for many years and am anxious to include these volumes in my Logos 5. Logos needs some more orders to produce this set of books. Let’s pull together. Once the work is published in digital format the price will be $99.95.