Immediately upon looking at Isaiah 11 I think of the reference to the Messiah –  “a shoot from the stump of Jesse.” Look back to chapter 4 for an illustration for that.

I could show you individual photos of many of the animals mentioned in verses 6-7, but I do not have the wild and vicious with the tame and gentle. It doesn’t happen in the animal kingdom, but it is true in the kingdom of the Messiah. See, for example, Colossians 3:11 where there is not Greek and Jew, circumcised and uncircumcised, barbarian, Scythians, salve, free. In Christ these distinctions are broken down.

Here I have chosen to concentrate on the promise of the return of a remnant from captivity, an event that took place initially in 536 B.C.

And the LORD will utterly destroy the tongue of the Sea of Egypt, and will wave his hand over the River with his scorching breath, and strike it into seven channels, and he will lead people across in sandals. And there will be a highway from Assyria for the remnant that remains of his people, as there was for Israel when they came up from the land of Egypt. (Isaiah 11:15-16 ESV)

The Euphrates is the largest, longest and most important river of Western Asia. It is nearly 1800 miles long and was the northeastern boundary of the land promised to Abraham (Genesis 15:18). The empires of Assyria and Babylon, the greatest enemies of Israel, were east of the Euphrates. The Old Testament prophets often put the Euphrates by metonymy for these countries to designate the place from which the punishment of God would come (Isaiah 7:20; 8:7; Jeremiah 46:10

The Euphrates was so significant in the history of Israel that the phrase “the River” is used frequently in the Old Testament to indicate the Euphrates. 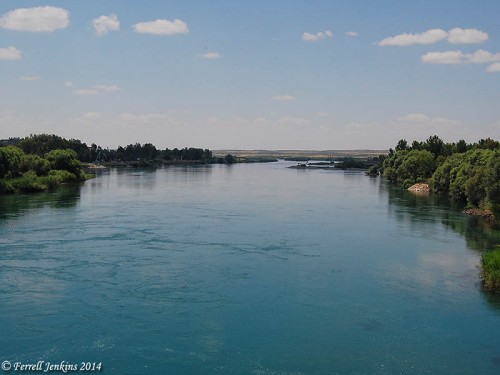 The LORD said that He would bring “the waters of the River, the king of Assyria and all his glory” like a flood to rise to the neck of His people (Isaiah 8:6-8). Now He promises to strike the River and allow His people to return from the exile in sandals. In fact, He says, “there will be a highway from Assyria for the remnant that remains of his people” 11:16).

When Assyrian kings stated in their annals that they crossed the river Euphrates they mean that they went to war against nations west of the River.