The theater at Corinth

The theater at Corinth is a short distance from the agora and the Temple of Apollo. Reddish and Fant describe the theater:

The theater dates from the 5th century B.C.E. and later was rebuilt by the Romans, who added a multistory stage building . In Paul’s time it seated approximately 14,000 spectators. (A Guide to Biblical Sites in Greece and Turkey, p. 59)

According to the same source, both the theater and the odeion, “were later used for gladiatorial spectacles; the theater was even fitted for mock sea battles.” 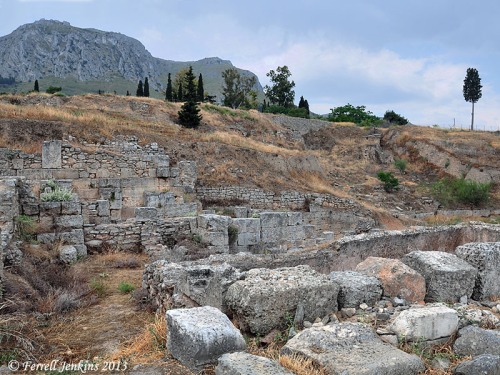 Ruins of the theater at Corinth. Photo by Ferrell Jenkins.

The theater is not on the typical tourist route at Corinth, but it can be reached along a rugged path north of the major excavated area.

The Apostle Paul spent 18 months among the Corinthians.

2 responses to “The theater at Corinth”