The precision and chronological exactitude with which this journey is recounted is amazing. F. F. Bruce says,

The description of this critical journey of Paul and his disciples to Jerusalem is given in considerable detail; some have compared the detailed description in the Third Gospel of Jesus’ critical journey to Jerusalem with His disciples. But the kind of details is different; the chronological exactitude of this second “we” narrative of acts is due mainly to the fact that Luke was one of the party and kept a log-book. (The Book of Acts in the NICNT, 407).

The photo below was made from a ship after it passed from north to south through the narrow strait between Samos (on the left) and the Turkish coast (on the right).  The ancient site of Trogyllium is located on the small peninsula extending into the Aegean Sea. 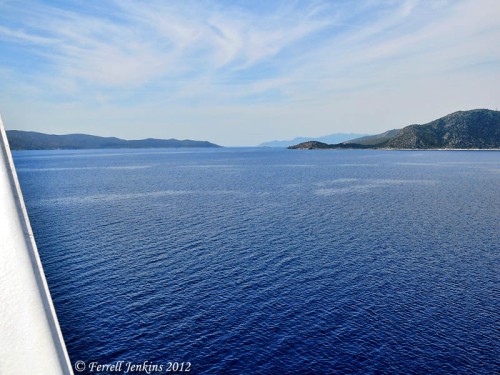 View north of the Samos-Turkey Strait. Photo by Ferrell Jenkins.

Acts 20:15    —    Tarried at Trogyllium. (Appears in Western and Byzantine texts and in the KJV and NKJV.) The omission of the name in most manuscripts is explained by Bruce M. Metzger:

“Chiefly because of superior external attestation, a majority of the Committee preferred the shorter text” (A Textual Commentary on the Greek New Testament, 478).

Ramsay points out that the information is,

“in itself highly probable, for the promontory of Trogyllian or Trogylia projects far out between Samos and Miletus, and the little coasting vessel would naturally touch there, perhaps becalmed, or for some other reason” (The Church in the Roman Empire, 155).

This photo shows some standing water in the Lion Harbor of Miletus. 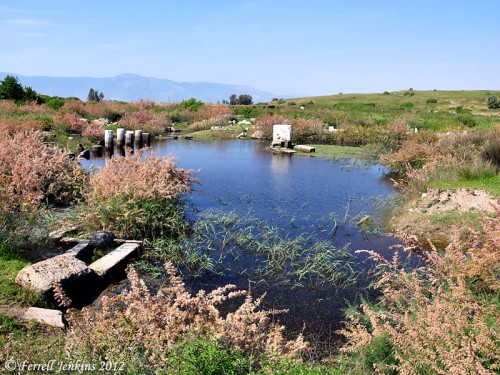 Ruins of the Lion Harbor at Miletus. Photo by Ferrell Jenkins.

Acts 20:16    —    Paul had decided to sail past Ephesus — to be in Jerusalem on Pentecost (fifty days after leaving Philippi).

From Miletus Paul sent for the Ephesian elders. Consider the distance. How long would it take the courier to go to them and for them to come to him at Miletus? The distance was 63 miles by land or 38 if they went across the gulf of Latmos. This gulf is now silted up, leaving only a small inland lake.

The photo shows the site of the Gulf of Latmos which is now silted up. Turkish farmers grow rice in the area. The Meander River flows to the left of this photograph.

Site of the Gulf of Latmos, now silted up, within 2 miles of Miletus. Photo: F. Jenkins.

If our study of the Book or Acts, or any book of the Bible, is only a cursory one without attention to details, we miss much of what was intended for us.

Note: Use the Search Box to locate posts about Philippi, Assos and Mitylene, Ephesus, Miletus, Rhodes, Tyre, Ptolemais, and Caesarea.