The Cyprus Mail reports the results of archaeological work in the agora at ancient Paphos, Cyprus, by the Institute of Archaeology of the Jagiellonian University, Kraków, Poland.

One of the significant discoveries during the August/September excavations was a small tablet with the name of an official on it in the Greek language. According to the article, the Greek inscription reads,

Architectural remains from the Roman period were also uncovered in the same area as the Greek inscription.

The photo below shows a few fallen columns in the mostly unexcavated agora in mid-May, 2012. 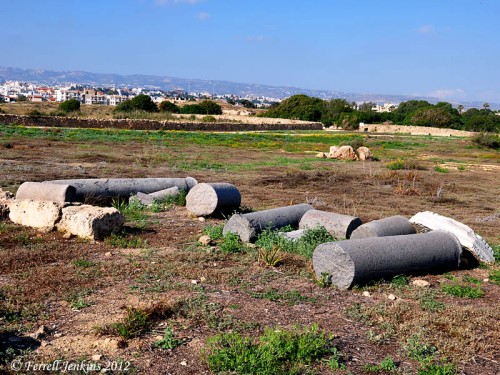 Barnabas, Saul, and John Mark arrived at Paphos after crossing the length of the island of Cyprus on the first missionary journey. It was here that Saul’s name was changed to Paul.

6 When they had gone through the whole island as far as Paphos, they came upon a certain magician, a Jewish false prophet named Bar-Jesus.
7 He was with the proconsul, Sergius Paulus, a man of intelligence, who summoned Barnabas and Saul and sought to hear the word of God.
8 But Elymas the magician (for that is the meaning of his name) opposed them, seeking to turn the proconsul away from the faith.
9 But Saul, who was also called Paul, filled with the Holy Spirit, looked intently at him
10 and said, “You son of the devil, you enemy of all righteousness, full of all deceit and villainy, will you not stop making crooked the straight paths of the Lord?
11 And now, behold, the hand of the Lord is upon you, and you will be blind and unable to see the sun for a time.” Immediately mist and darkness fell upon him, and he went about seeking people to lead him by the hand.
12 Then the proconsul believed, when he saw what had occurred, for he was astonished at the teaching of the Lord. (Acts 13:6-12 ESV)