During World War II when Great Britain was dealing with the threat of extinction,  C. S. Lewis wrote The Screwtape Letters. These letters of unknown provenance are from the senior devil Screwtape to a junior tempter named Wormwood.

Saturday afternoon I saw actor Max McLean in a Broadway-type production, C. S. Lewis The Screwtape Letters. The production begins with Screwtape giving the graduation address at the Tempters’ Training College for Young Devils. After that, everything else takes place in Screwtape’s Office in Hell.

Screwtape writes a series of letters to his nephew Wormwood to help him in working with one of his “patients” – a young Christian man on earth. Wormwood is supposed to keep the patient distracted from serving the Enemy (God), and to deliver him to “our Father below” (the Devil).

In addition to McLean’s superb acting, Toadpipe is a delightful addition to the stage production. She is Screwtape’s secretary in his office in Hell. 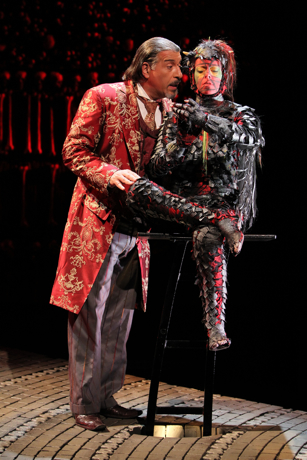 Max McLean as Screwtape and his secretary Toadpipe in The Screwtape Letters.

If you have never read The Screwtape Letters, you should do so. The book is available from Amazon in both print and Ebook.

This little except from Letter XII shows us how easily it is for the Devil to distract one from genuine service to the Enemy (God).

You will say that these are very small sins; and doubtless, like all young tempters, you are anxious to be able to report spectacular wickedness. But do remember, the only thing that matters is the extent to which you separate the man from the Enemy. It does not matter how small the sins are provided that their cumulative effect is to edge the man away from the Light and out into the Nothing. Murder is no better than cards if cards can do the trick. Indeed the safest road to Hell is the gradual one—the gentle slope, soft underfoot, without sudden turnings, without milestones, without signposts.

C. S. Lewis The Screwtape Letters is scheduled for several other cities. Take a look at the ScrewtapeOnStage.com for details.

If you are interested in C. S. Lewis, take a look at this photo essay about Lewis here.

Two references from Paul’s second letter to the church at Corinth are appropriate here.

And no wonder, for even Satan disguises himself as an angel of light. (2 Corinthians 11:14 ESV)

so that we would not be outwitted by Satan; for we are not ignorant of his designs. (2 Corinthians 2:11 ESV)

One response to “Max McLean in C. S. Lewis The Screwtape Letters”