“Beware the ides of March” 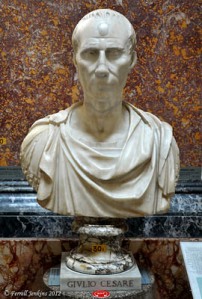 Bust of Julius Caesar in the Vatican Museum. Photo by Ferrell Jenkins.

Shakespeare has the Sootsayer warn Caesar, “Beware the ides of March.” The ides of March was used to describe the 15th of March in the Roman calendar. It was on that day that Julius Caesar was assassinated in 44 B.C. As a result, the expression has come to have a sense of foreboding — a sense that something bad is about to happen.

Our photo below shows the place in the Roman Forum where a temple was built to honor Julius Caesar by Augustus in 29 B.C. The deification of rulers was already common in the eastern part of the Empire. This practice would become a serious problem for the Christians of the Roman Empire before the end of the first century A.D., especially those living in Asia Minor. This is one of the issues addressed in the Book of Revelation.

Ruins of the Temple erected to Caesar in the Roman Forum. Photo by Ferrell Jenkins.

The James Ossuary verdict. Does it matter?

Shortly after the SBL meeting in Toronto (November, 2002), I presented a lecture on the subject and posted similar material on Bible World here. The material I have posted in the past two days, and this one, has been posted at Bible World since December 18, 2002. Only minor changes have been made to correct tenses, mention dead links, etc.

Below are the questions I asked in my study, and the conclusions I drew, in 2002. This was when the issue was still a matter of scholarly discussion. No criminal forgery charges had been made at the time.

Several important questions should be asked about this ossuary. These questions will help us draw some conclusions.

Did the ossuary originate in first century Jerusalem? The evidence indicates that it did. The Geologic Survey of Israel has certified that the limestone is typical of that quarried in Jerusalem during the first and second centuries A.D. The patina in the inscription contains no modern elements, and there is no indication of the use of a modern tool on the ossuary. André Lemairé thinks this type of ossuary can be dated between 20 B.C. and A.D. 70.

Is the inscription authentic? The shape of certain of the letters indicates that the Aramaic inscription belongs to the last decades before the destruction of Jerusalem in A.D. 70. This is the exact period, according to Josephus, when James was killed. Some scholars have suggested that the inscription may have been written by two different hands. Lemairé sees no reason to draw this conclusion. After the panel discussion [at the SBL meeting in Toronto] the ossuary was examined by Frank Moore Cross and Joseph Fitzmeyer, both experts in the Aramaic of this period. According to Oded Golan, in an interview with the Discovery Channel  [the link is no longer active], they believe the inscription was written by one hand.

Is this the James of Galatians 1:19 and Acts 15? Is the James mentioned on the ossuary the James of the New Testament (Acts 15; Gal. 1:19)? In first century Jerusalem many people bore the names James, Joseph, and Jesus. When we consider the combination of relationships (son of, brother of), the number of possibilities goes down dramatically. The exact size of the population is uncertain. Lemairé estimated a maximum population of 80,000. Based on ossuary inscriptions of the period, Lemairé first suggested that about 20 people could be called “James son of Joseph brother of Jesus.” Golan says that Professor Camil Fuchs, head of Tel Aviv University’s Department of Statistics and Operations Research in the School of Mathematical Sciences, estimates on the basis of a highly complex statistical analysis that “only one person could be ‘James son of Joseph brother of Jesus,’ and that is the man who was known as James the Just, a leader in the early church and the brother of Jesus Christ” (Paddey, Patricia L. “Ossuary’s Owner Reveals New Research.” http://www.biblenetworknews.com (23 Nov. 2002; this link is no longer active). I think the combination of relationships makes it highly probable that this is the ossuary of the James of Acts 15, but we may never know for certain.

Does it matter? If the inscription is authentic, it is another of the many archaeological confirmations of Biblical characters. We already know of Caiaphas, Pilate, Erastus, et al. It is another example of the historicity of the New Testament. It provides the earliest inscriptional evidence of Jesus. If the inscription is not authentic then it is just an ordinary limestone bone box, but one that has caused multitudes to discuss Jesus and the New Testament. Let us use it as an opportunity to discuss Jesus with those who do not know Him.

Please keep in mind that the New Testament documents, all of which date to the first century, provide the evidence that Jesus is the Christ, the Son of God (John 20:31).

Now Jesus did many other signs in the presence of the disciples, which are not written in this book; but these are written so that you may believe that Jesus is the Christ, the Son of God, and that by believing you may have life in his name. (John 20:30-31 ESV)