Bible History Daily, a news/advertising newsletter of the Biblical Archaeology Society, announces that the Israel court verdict on the James Ossuary and other artifacts will be released March 14.

James, the brother of Jesus, ossuary. Photo by Ferrell Jenkins.

The Israeli court system is different from the one we are accustomed to in the United States. This case was brought against Oded Golan, Robert Deutsch, and others 5 years ago. The judge listens to all of the evidence and then makes the decision.

You might be interested in getting a free eBook about the James Ossuary and the other suspected artifacts. It will be made available along with an English translation of the court verdict shortly after the decision is announced. Click here for the link to the eBook and more info on the case. Be assured that by signing up for this booklet you will received regular Emails from the BAS.

In late December 2004, four Israelis and one Palestinian Arab were indicted in Jerusalem on charges of running a massive forgery ring over several decades. The Israel Antiquities Authority (IAA) and the Israeli police claimed the ring had created a host of Biblically-related ancient artifacts with forged inscriptions involving millions of dollars, some of which are exhibited in the prestigious Israel Museum. The trial opened in September 2005 and continued for five years through 116 sessions, 133 witnesses, 200 exhibits, and close to 12,000 pages of testimony from witnesses.

In October 2010, closing arguments finally wrapped up in “the forgery trial of the century,” to determine whether or not the James Ossuary, the Yehoash tablet and other ancient artifacts were forged by two defendants. Trial judge Aharon Farkash pored through the evidence over the past 15 months, and is ready to deliver his verdict in the upcoming days.

The judge will be deciding whether the case’s two remaining defendants, Tel Aviv collector Oded Golan and antiquities dealer and scholar Robert Deutsch, are guilty of creating and selling forged antiquities, most notably the now-famous first-century C.E. bone box (or ossuary) inscribed “James, son of Joseph, brother of Jesus,” a small inscribed ivory pomegranate allegedly used in Solomon’s Temple, and the Yehoash tablet, which, if authentic, would be the first royal inscription of an Israelite king ever found.

After the verdict is devoured by readers around the world there will still be differences of opinion.

New discoveries at the Colossi of Memnon

On the way from Luxor to the Valley of the Kings on the West Bank of the Nile one passes two huge statues known as the Colossi of Memnon. The statues are nearly 60 feet tall, and once stood at the entrance to the funerary temple of Amenhotep III (also known as Amenophis III). With their crowns, each statue would have been about 66 feet tall. Amenhotep III ruled Egypt during the 18th Dynasty (14th century B.C.).

During the time of the Roman Empire the statues were mistakenly associated with “Memnon, son of Eos and Tithonus, who was killed by Achilles during the Trojan War” (Baedeker’s Egypt).

Travelers since the time of the Emperor Nero have carved their name in these sandstone statues.

The photo below was made January 17, 2011. A fence may be seen in the background where archaeologists were working to restore new statues that have been found over the past few years. 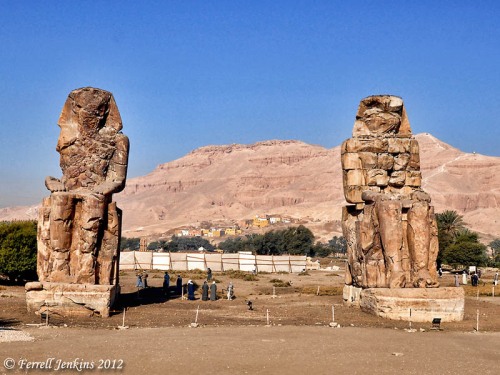 The Colossi of Memnon in the West Bank of the Nile. Photo by Ferrell Jenkins.

I was able to get a few photos of the area where the workers were restoring some of the statues recently uncovered. Notice some items covered with white, and others lined up on the right side of our photo. 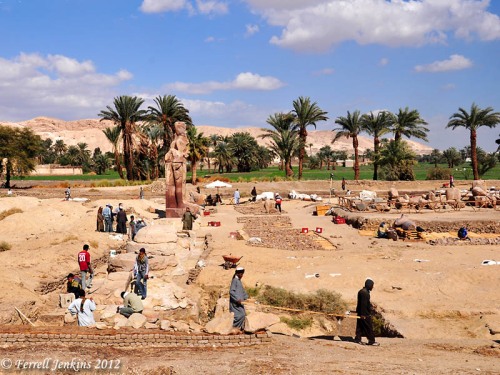 Temple of Amenophis III - West Bank of the Nile. Photo by Ferrell Jenkins.

In the next photo you will see several pieces covered. One shows the distinct appearance of a giant arm in my original photo.

Temple of Amenophis III - West Bank of the Nile. Photo by Ferrell Jenkins.

In addition to what I was able to see, the Luxor Times reported the unveiling of yet another new statute that has been restored. Here is one of the photo from that report. The brief news report with several photos may be read here. 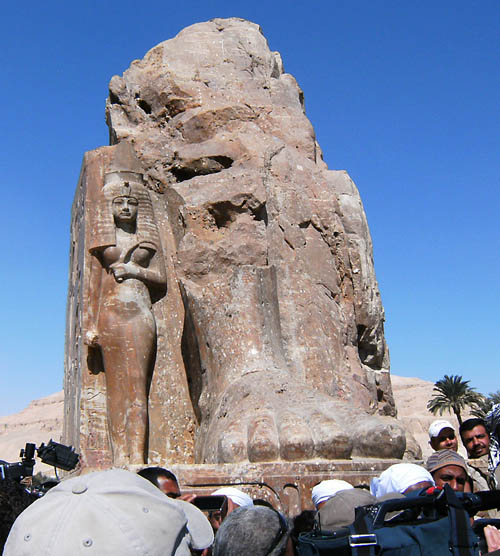