In anticipation of the “James Ossuary” verdict which is scheduled to be announced March 14, I decided to provide some background material. First, here is a brief discussion of the identity of James, and his relation to Jesus.

The name James was a common name in New Testament times. Several people bearing that name are mentioned in the New Testament. Two apostles bore that name: James the son of Zebedee (Matthew 4:21; 10:2), and James the son of Alphaeus (Matthew 10:3). James, the son of Zebedee, and brother of the apostle John, was put to death by Herod Agrippa I before A.D. 44 (Acts 12:1-2). There was also James, the brother of Jesus. Paul refers to him, along with Cephas [Peter] and John as men who were reputed to be pillars among the brethren (Galatians 2:9). Paul identifies James as “the Lord’s brother” in Galatians 1:19.

The New Testament mentions the brothers and sisters of Jesus in Mark 6:3 and Matthew 13:55-56. Roman Catholics make every effort to evade the plain meaning of “brother.” Roman Catholics hold the non-biblical doctrine of the perpetual virginity of Mary. They claim that the brothers of Jesus were really half-brothers or cousins. The inscription on the James ossuary has opened this issue anew, but more about that at another time (see Matthew 1:25). The New Testament indicates that James and the others listed were the uterine brothers of Jesus. James, the Lord’s brother, is generally thought to be the author of the Epistle of James. Jude, another brother of Jesus, wrote a short book in which he says that he is “a bond-servant of Jesus Christ, and brother of James.” This last expression indicates that Jude was not as well known as James.

The brothers of Jesus did not believe in him during His public ministry (John 7:5), but after the resurrection they are mentioned among the disciples (Acts 1:14). Paul informs us that Jesus made an appearance to James (1 Corinthians 15:7). At least some of the brothers of Jesus seem to be preachers of the gospel (1 Corinthians 9:5). It appears that the brothers of Jesus were convinced by the resurrection. James proved to be influential among the brethren both in Jerusalem and in other places (Galatians 2:11-13; Acts 15; 21:17-26). We’ll leave this matter for another time.

Josephus, the Jewish historian, makes a reference to “the brother of Jesus, who was called Christ, whose name was James” (Ant. Xx.9.1). Eusebius, the early church historian, records the martyrdom of “James, the brother of the Lord” in his Ecclesiastical History (2.23). He cites the earlier accounts by Hegesippus, Clement of Alexandria, and Josephus. This would have been shortly after the death of Festus, procurator of Judea, in A.D. 61.

The photo below shows two of the monumental tombs in the Kidron Valley between the Old City of Jerusalem and the Mount of Olives, south of the so-called Tomb of Absalom (see here). Modern Jewish tombs are visible on the slopes of the Mount of Olives above the older monuments. 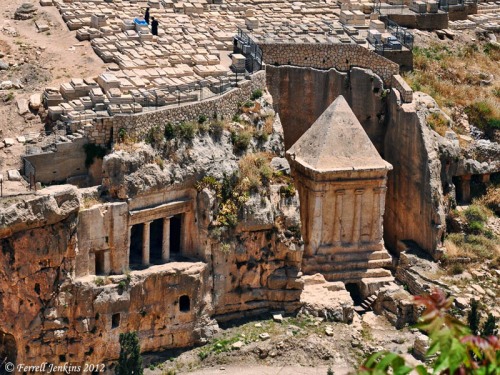 We have pointed out before that many structures have been incorrectly identified with specific biblical characters over the centuries. The tomb identified with James belonged to a priestly family named Hezir. Perhaps this Hezir was a descendant of a priest mentioned in 1 Chronicles 24:15. The name appears again in Nehemiah 10:20. The connection with James was a mistaken idea.

2 responses to “James the Lord’s Brother”