The Olive – first among the trees

The promised land, which the Israelites were about to enter, is described as a land of trees and crops.

a land of wheat and barley, of vines and fig trees and pomegranates, a land of olive trees and honey, a land in which you will eat bread without scarcity, in which you will lack nothing, a land whose stones are iron, and out of whose hills you can dig copper. (Deuteronomy 8:8-9 ESV)

Note that the land is a “land of olive oil.” In addition to using the olive for food, and in cooking, several other uses are mentioned in the Bible.

When an unworthy man by the name of Abimelech promoted himself to be the king of his people, Jotham went up on Mount Gerizim and spoke to the leaders of Shechem. The full story is in Judges 9. In Jotham’s parable (or fable) the trees of the forest called on various trees to rule over them. The trees first called on the olive tree to reign over them (v. 8). Look at the words of the olive tree as he excused himself.

But the olive tree said to them, ‘Shall I leave my abundance, by which gods and men are honored, and go hold sway over the trees?’ (Judges 9:9 ESV)

After that, the fig and the vine likewise excused themselves. Finally, the worthless bramble accepted their offer boasting of what he could do for them.

The photo below is a rather typical scene in the central mountain range of Palestine/Israel. Rather than the vast acres of olives trees in a row, like I have seen in Spain, these are scattered. A few other trees are mixed among the olives. 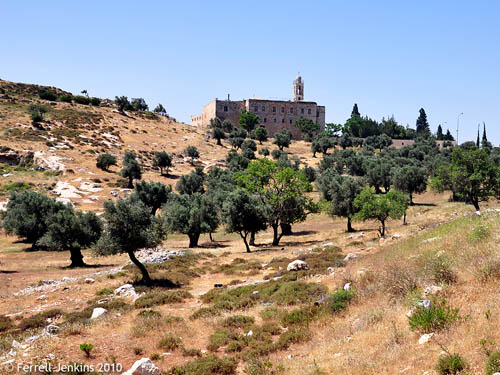 Mar Elias Monastery is located on the east side of the main road between Jerusalem and Bethlehem. One religious tradition from the Byzantine period has it that Mary rested at this place on her way to Bethlehem. Another has it that Mary stopped here for water on the flight to Egypt and water flowed from a rock. See The Holy Land by Murphy-O’Connor for more info.

The next photo is of terraced olive groves in the central mountain range south of Shiloh. 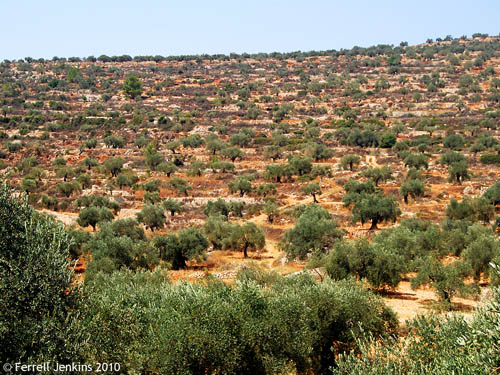 Presentation quality photos are available by clicking on the images above.

One response to “The Olive – first among the trees”