David … saw from the roof a beautiful woman bathing

Well, I suppose everyone who reads this blog knows the story. It is the story of David and Bathsheba. Perhaps some wonder how this could be possible. The terrain of Jerusalem tells the story. This photo shows the location of the City of David where the railing is at the top. One can easily envision King David looking down from his roof to houses below. 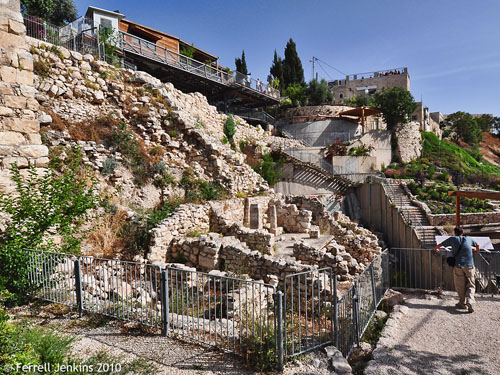 The City of David from below. Photo by Ferrell Jenkins.

In the spring of the year, the time when kings go out to battle, David sent Joab, and his servants with him, and all Israel. And they ravaged the Ammonites and besieged Rabbah. But David remained at Jerusalem. It happened, late one afternoon, when David arose from his couch and was walking on the roof of the king’s house, that he saw from the roof a woman bathing; and the woman was very beautiful. (2 Samuel 11:1-2 ESV)

Read the full account in 2 Samuel 11. A hi-res image is available by clicking on the photo.

Artist Balage Balogh has illustrated this biblical story for us in the image below. Take a look at his work at Archaeology Illustrated.

King David on his balcony. Illustration by Balage Balogh.