Announcement was made today that the excavation at Tel Kedesh has uncovered a gold coin dating to 191 B.C. The coin was minted in Alexandria by Ptolemy V and bears the name of the wife of Ptolemy II, Arsinoë Philadelphus (II).

According to Dr. Donald T. Ariel, head of the Coin Department of the Israel Antiquities Authority, “This is an amazing numismatic find. The coin is beautiful and in excellent preservation. It is the heaviest gold coin with the highest contemporary value of any coin ever found in an excavation in Israel. The coin weighs almost one ounce (27.71 grams), while most ancient gold coins weighed 4.5 grams. In Ariel’s words, “This extraordinary coin was apparently not in popular or commercial use, but had a symbolic function. The coin may have had a ceremonial function related to a festival in honor of Queen Arsinoë, who was deified in her lifetime. The denomination is called a mnaieion, meaning a one-mina coin, and is equivalent to 100 silver drachms, or a mina of silver.

The obverse (‘head’) of the coin depicts Arsinoë II Philadelphus. The reverse (‘tail’) depicts two overlapping cornucopias (horns-of-plenty) decorated with fillets. The meaning of the word Philadelphus is brotherly love. Arsinoë II, daughter of Ptolemy I Soter, was married at age 15 to one of Alexander the Great’s generals, Lysimachus, king of Thrace. After Lysimachus’ death she married her brother, Ptolemy II, who established a cult in her honor. This mnaieion from Tel Kedesh attests to the staying power of the cult, since the coin was minted a full 80 years after the queen’s death.

The Oriental Institute at the University of Chicago displays a statue base with the same name as that on the coin. The top of the statue has the name incised in hieroglyphs and the front shows the name in Greek.

Tel Kedesh, in Upper Galilee, is near the Lebanon border. This Kedesh was located in the territory of the Israelite tribe of Naphtali (Joshua 19:37). It is probably best known as one of the six cities of refuge assigned to the tribe of Levi (Joshua 20:7; 21:32).

Deborah went with Barak to Kedesh, where he called out the men of Zebulun and Naphtali to go with him to fight Jabin’s army (Judges 4). The Assyrians captured Kedesh about 732 B.C. (2 Kings 15:29). 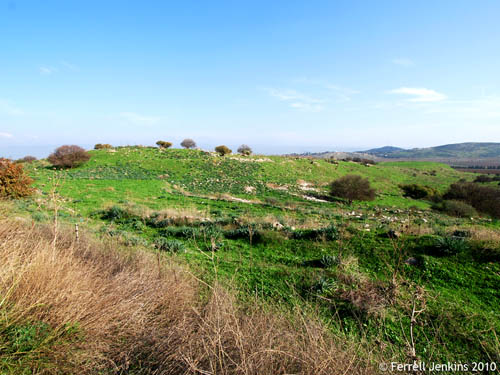 View to the NE of Tel Kedesh in northern Galilee. Photo by Ferrell Jenkins.