The chariot city of Megiddo

For years it has been pointed out that there is at least some evidence for stables at Megiddo. The biggest dispute has been over who built and used the stables.

On my last visit to Megiddo I noticed some new sculptures had been placed at the site. The view is to the north across the Jezreel Valley toward Lower Galilee. This sort of decoration has become common at parks in Israel. 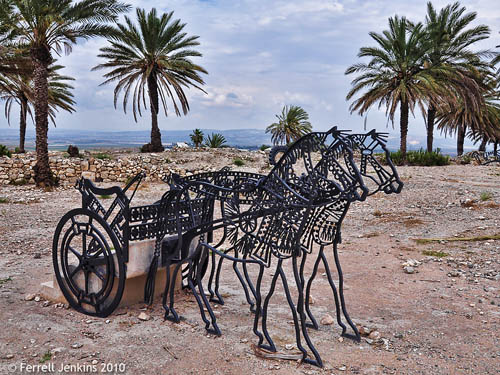 Chariot and horses sculpture at Megiddo. Photo by Ferrell Jenkins.

There are several reference in the Bible connecting Megiddo with chariots. Because Megiddo was located on the main trunk road between Egypt and the empires of the north (Hittites and Syria) and those of the east (Assyria, Babylon, and Persia), we should not find this surprising.

Solomon is said to have built the house of the LORD, his own house, the Millo and the Wall of Jerusalem, and the cities of Hazor, Megiddo, and Gezer (1 Kings 9:15). The same context makes reference to chariot cities built by Solomon:

The drawing below comes from 1,000 Bible Images (Logos) with this note:

The picture shows two chariots and some foot soldiers, each carrying a curved ax, made of ivory (from Megiddo).

Read a little about this publication here. I do not recall having seen this piece in any museum. Does any reader know where it may be? There is a similar piece in the Oriental Institute.

Chariots and foot soldiers made of ivory. 1,000 Bible Images.

Shalmaneser III (858-859 B.C.) informs us that Ahab, the Israelite, provided 2,000 chariots and 10,000 foot soldiers to the coalition that fought against the Assyrian king at Qarqar (Stone Monolith from Kurkh, now in the British Museum). Sounds as if Ahab had an impressive army.