Austrian Times reports here on the discovery of a Babylonian seal impression at Tell el-Dab’a in Egypt.

Austrian archaeologists have found a Babylonian seal in Egypt that confirms contact between the Babylonians and the Hyksos during the second millennium B.C.

Irene Forstner-Müller, the head of the Austrian Archaeological Institute’s (ÖAI) branch office in Cairo, said today (Thurs) the find had occurred at the site of the ancient town of Avaris near what is today the city of Tell el-Dab’a in the eastern Nile delta.

She said a recently-discovered cuneiform tablet had led archaeologists to suspect there had been contact between the Babylonians and the Hyksos.

Forstner-Müller added that Manfred Bietak had begun archaeological research on the period of Hyksos dominance at the remains of a Hyksos palace at Avaris in 1966.

Earlier in the year we reported on the discovery of a Babylonian tablet at Tell el-Dab’a here.

The report  says the Austrian plan to build a museum in the area. A more complete report in Die Presse says they also have plans to restore the river. The Pelusiac branch of the Nile once flowed by this ancient site. Below is a photo of the canal which often follows the course of the Pelusiac. 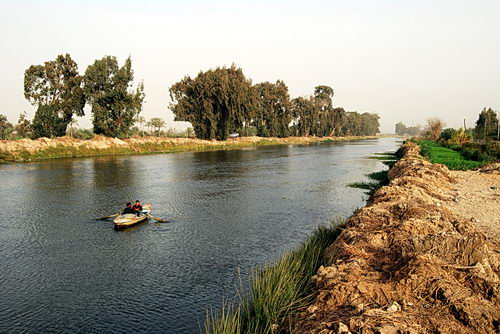 Canal along the Pelusiac Branch of the Nile near Tell el-Dab’a. Photo by FJ.

Tell el-Dab’a is in the eastern Nile Delta. In Biblical times it was known as the Land of Goshen, and served as the home of the Israelites.

“Hurry and go up to my father, and say to him, ‘Thus says your son Joseph, “God has made me lord of all Egypt; come down to me, do not delay. “You shall live in the land of Goshen, and you shall be near me, you and your children and your children’s children and your flocks and your herds and all that you have. “There I will also provide for you, for there are still five years of famine to come, and you and your household and all that you have would be impoverished.” (Genesis 45:9-11 NAU)

These new findings might shed some light on the plausibility of Achan finding a garment from Shinar (Babylon) at Jericho (Joshua 7).

What is in the basement of the Cairo Museum?

Tourists who visit the Egyptian Museum in Cairo are overwhelmed at the large collection of Egyptian artifacts. In fact, most folks just see a few of the displayed items. Have you ever thought about the basement. Take a look at this video featuring Dr. Zahi Hawass, the flamboyant director of antiquities in Egypt.

Now, if they would only allow the taking of photos in the galleries!
HT: Biblical Paths