A recent report by Dutch researchers calls attention to the relation of the irrigation, especially that in the Zerqa River triangle of Jordan, to population and the nature of the communities.

You can make major discoveries by walking across a field and picking up every loose item you find. Dutch researcher Eva Kaptijn succeeded in discovering – based on 100,000 finds – that the Zerqa Valley in Jordan had been successively inhabited and irrigated for more than 13,000 years. But it was not just communities that built irrigation systems: the irrigation systems also built communities.

Archaeologist Eva Kaptijn has given up digging in favour of gathering. With her colleagues, she has been applying an intensive field exploration technique: 15 metres apart, the researchers would walk forward for 50 metres. On the outward leg, they’d pick up all the earthenware and, on the way back, all of the other material. This resulted in more than 100,000 finds, varying from about 13,000 years to just a few decades old. Based on further research on the finds and where they were located, Kaptijn succeeded in working out the extent of habitation in the Zerqa Valley in Jordan over the past millennia.

The Zerqa River is known as the Jabbok in the Bible. It is probably best known as the place where Jacob met with Esau as he returned from Paddan Aram, and where his name was changed to Israel (Genesis 32).

The same night he arose and took his two wives, his two female servants, and his eleven children, and crossed the ford of the Jabbok. (Genesis 32:22 ESV) 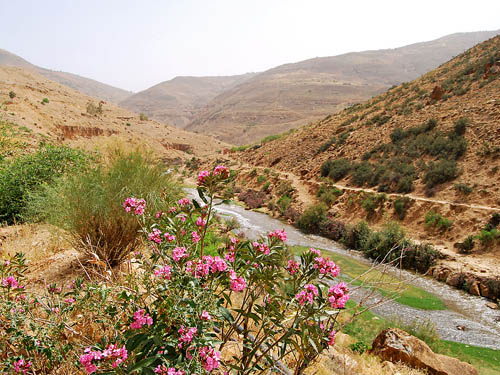 The Jabbok (Zerqa) River near the Jordan Valley. Photo by Ferrell Jenkins.