The Israel National News reports here on a new exhibit at the Davidson Center in the Jerusalem Archaeological Garden in Jerusalem.

A very special exhibition opens next week in Jerusalem, revealing to the public for the first time all of the ancient coins uncovered in excavations at the foot of the Temple Mount. 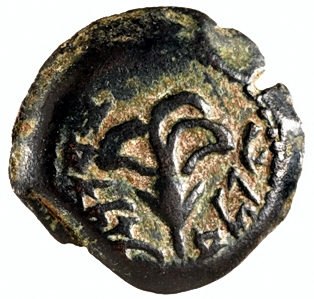 The article includes some nice photos of the exhibit and a couple of the coins. One is labeled Lily King Yehonatan. In most English sources I have used on the period between the Testaments this ruler is called Alexander Jannaeus. He was the Hasmonean ruler recognized as King of Judea from 103 to 76 B.C.

Hendin, Guide to Biblical Coins,  shows a similar coin with the obverse (head) showing a lily surrounded by a Hebrew inscription (Yehonatan the king). The reverse (tail) shows an anchor with the inscription “of Alexander the king.”