Innsbruck to Venice via Verona

Today we traveled from Innsbruck to Venice. This involved driving over the Brenner Pass and through the Dolomite region of the Italian Alps. It rain off and on most of the day, but that did not seem to deter the enjoyment of the experience for the tour members.

We had some time in Verona, Italy, for a visit of the city. Everyone wants to see the balcony associated with Shakespeare’s Romeo and Juliet. It was impossible to get a good photo because of the large number of tour groups composed of college age young people. Here is a little peak.

I was more fascinated by the strong Roman fortifications that are still visible around the city. The Colosseum, which was built in the first century B.C. or the first century A.D., is the third largest in the world and is among the best preserved from the ancient world.

The Colosseum is located in the center of the town and is still used for various musical performances. 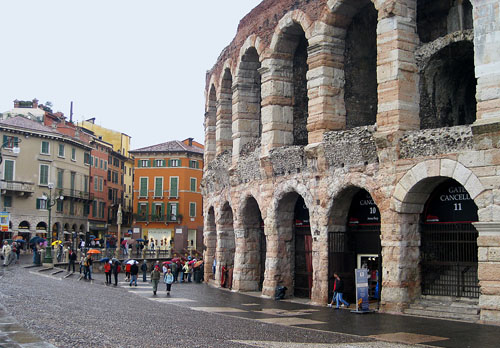 We look forward to visiting Venice tomorrow. The city is situated more than two miles from the mainland on 118 islands connected by many stone bridges and interlaced by more than 150 canals.

So far as I can detect all of the members of our group are in good health and good spirit.

After a period of worship Sunday morning we left Lucerne headed east to the Austrian town of Innsbruck. The weather of the day was mixed with periods of light rain and sunshine. For lunch we stopped in Vaduz, capital of the Principality of Liechtenstein. The country is sometimes referred to as a postage stamp country. This is for two reasons. Much of the income comes from selling postage stamps to collectors. The other is the size of the country. It consists of an area covering about 62 square miles. Some of the countries of Europe are not as large as some American cities or counties.

The downtown area of Vaduz, the capital of the country, has been turned into a pedestrian shopping mall. The king of Liechtenstein is a collector of modern art. Modern sculptures cover the strolling area of the city. One piece that caught my attention was a bronze mask called African King. I made my photo to show the Agfa sign on the store behind the mask. My caption for the photo is “A mind filled with images.” Discern if you can. 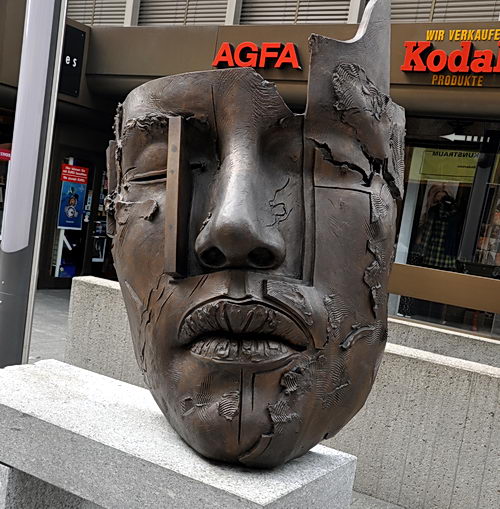 A mind filled with images. Photo by Ferrell Jenkins.

Driving throught the heart of the Alps we arrived in Innsbruck, capital of the Austrian province of Tyrol. This 800-year-old city was named for the bridge across the Inn River, first built in the 12th century. It doesn’t take long to see the highlights of the city. The Goldenes Dachl (Golden Roof), a late Gothic oriel with 2,657 gold-plated tiles, was built between 1494 and 1496 under the rule of Emperor Maximilian I as a royal box for spectacles held in the square below.

The Golden Roof in Innsbruck. Photo by Ferrell Jenkins.