Yesterday we arranged for a car and driver to take us to the places we wanted to go on Malta. It is possible to rent cars, but the driving is after the British style (one the left side of the road), and few roads are straight. Many are not marked. I know we got to a few places were would not have found on our own. Our driver was an older gentleman who was a native of the area. Except for St. Thomas Bay, he seemed to be well aquainted with the area and the good places to stop for photos.

We visited a spot near St. Paul’s Islands for photos. This is the traditional spot of the shipwreck involving Paul and Luke. Poor Luke gets no attention here, but there are churches dedicated to Paul in many places. Then we had a nice view from a high spot to see Mellieha Bay. This is the most northern of the bays and is thought by some to satisfy Luke’s description of the shipwreck being at the place where two seas meet (Acts 27:41). We also vsited St. Thomas Bay and Salina Bay.

Our driver took us to a few places we would not have gone had we been on our own, but we really enjoyed the short time we had at each one. We could have used more time, of course. The photo below is of Mdina. The Lonely Planet guide for Malta says,

The citadel of Mdina was fortified from as long ago as 1000 BC when the Phoenicians built a protective wall here and called their settlement Malet, meaning ‘place of shelter’. The Romans built a large town here and called it Melita. It was given its present name when the Arabs arrived in the 9th century – medina is Arabic for ‘walled city’. They built strong walls and dug a deep moat between Mdina and its suburbs (known as rabat in Arabic).

I think most of the current building in Mdina date from the 18th century. St. Paul’s Cathedral is said to have been built on land belonging to Publius.

Now in the region around that place were fields belonging to the chief official of the island, named Publius, who welcomed us and entertained us hospitably as guests for three days. (Acts 28:7 NET)

This photo shows the beautiful marker in the Maltese language and in English. 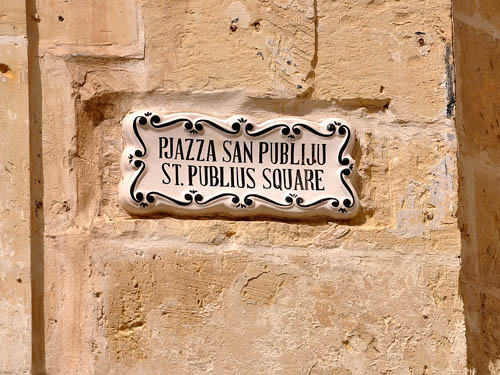 I also made a quick stop at the Maritime Museum in Vittoriosa, on the south side of the Grand Harbor at Valleta, to see the Roman anchors that have been found in Maltese waters.

Because they were afraid that we would run aground on the rocky coast, they threw out four anchors from the stern and wished for day to appear.(Acts 27:29 NET)

We said goodbye to our group early this morning at the Rome airportas they prepared to depart for the USA. Elizabeth and I went to another terminal to wait for our noon flight to Malta.This was my first time to fly Air Malta. The planes bear the distinctive Maltese Cross on the tail.Malta is renowned for its association with the 12th century Knights of Malta (also know as the Knghts of Rhodes, and the Knights of St. John). They were also called the Hospitalers. I think they built the first hospital in Jerusalem at a site now near the Church of the Holy Sepulcher. 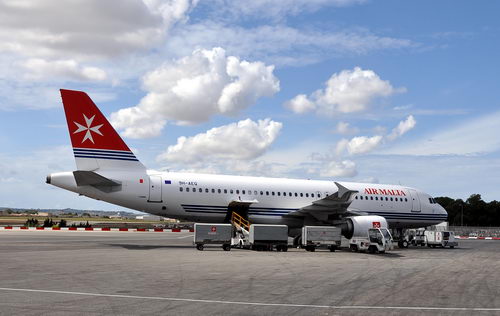 Malta is a popular resort and is still in the high season. We are staying at a hotel on the southern side of St. Paul’s Bay. My purpose in coming here is to photograph possible sites associated with Paul’s shipwreck.

After we had safely reached shore, we learned that the island was called Malta.  2 The local inhabitants showed us extraordinary kindness, for they built a fire and welcomed us all because it had started to rain and was cold. (Acts 28:1-2).

This is one of the first photos I made from our hotel balcony. 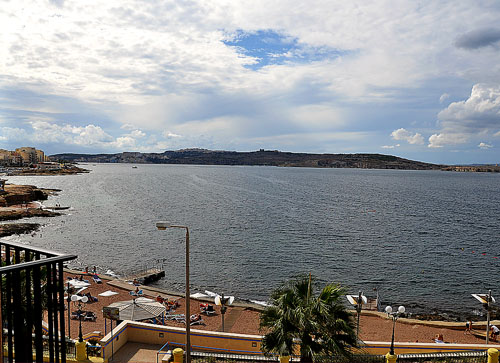 The next photo was made at sunset and shows a portion of the rocky coast even in an area now filled with shops and seaside restaurants. 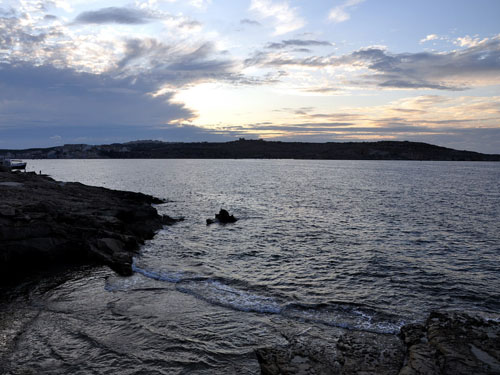 The rugged coast of St. Paul's Bay at Sunset. Photo by Ferrell Jenkins.