Anything Indiana Jones is the fad now since the release of the fourth movie featuring the adventuresome archaeologist. The USA Today Travel Newsletter (May 27, 2007) lists 10 great places to unleash your inner Indy. One of the places mentioned is Petra in Jordan. The article says,

“Hike or ride donkey-drawn carts through a slot canyon to arrive at this ancient city carved out of the sandstone cliffs,” [National Geographic’s Boyd] Matson says. “Petra offers the chance to hook up with nomadic tribesmen and do either a one-day or multi-day camel safari in the desert.” Now a UNESCO World Heritage Site, this once-vibrant Nabataean city was an oasis where Greeks, Romans and Arabs met for caravan trading. visitjordan.com

Parts of Indiana Jones and the Last Crusade was filmed at Petra. In this photo we see the snack shop, coffee shop, and gifts shop, all named for Indiana Jones. 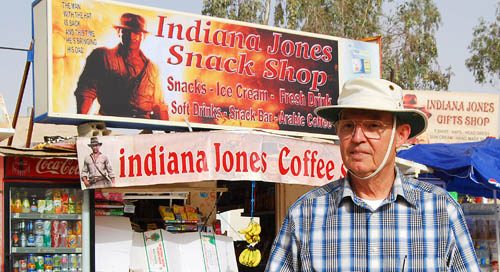 The site of Petra is identified as the biblical Sela (rock; 2 Kings 14:7; Isaiah 16:1), and the home of the ancient Edomites (descendants of Esau). From about 300 B.C. the area was inhabited by the Nabataeans from North Africa. G. Ernest Wright once described them as,

one of the most gifted and vigorous peoples in the Near East of Jesus’ time. (Biblical Archaeology, 229).

This photo shows the Roman theater at Petra which was cut out of the rock in the 2nd or 3rd century A.D. The theater seated about 3,000. 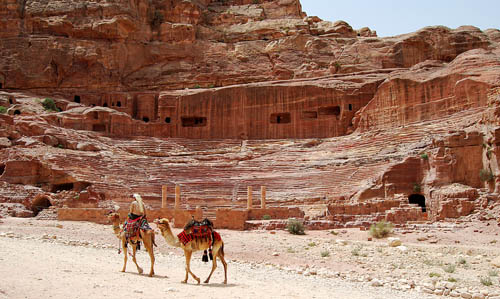 Several archaeologists have already pointed out that what Indiana Jones does is a far cry from real archaeological work. The real work is sometimes exciting, but always tedious. Bryant Wood is cited here:

“It is rather adventurous in a way, because for the most part, you’re going to some exotic country and delving into their past. But it’s not an adventure with a whip and chasing bad guys and looking for treasure,” said Bryant Wood, an archaeologist with Associates for Biblical Research.

“You’re working at one site tediously, probably for many, many years and spending more time processing the finds and writing reports than you do actually digging at the site. But that wouldn’t make for a very good story, spending 70 percent of the time in a library.”