Today we drove north of Izmir to visit the Pergamum (modern Bergama), another of the cities of the seven churches of the book of Revelation. This visit included the acropolis temple of Athena, the famous library, the royal palace, the temple of Trajan, the steepest theater of the world, and site of the altar of Zeus. The weather was perfect for photography most of the day. This photo shows the acropolis of Pergamum. 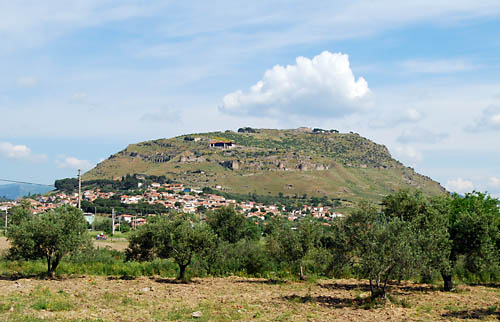 We made a short visit at the Archaeological Museum to see the inscription that states that Pergamum had twice been named NEOKOROS. This term means that two temples dedicated to the Roman emperors had been erected in the city. In fact, later there was a third temple. Emperor worship presented a serious problem for the Christians of Asia Minor in the last part of the first century, and the following centuries.

We visited the ruins of the Asclepieum, the medical center of the ancient world.

After lunch we drove to Thyatira (modern Akhisar) to see the few archaeological remains of the city. Lydia, the seller of purple who was converted to Christ at Philippi, was from Thyatira (Acts 16:14).