Memorial Day (Monday) honors all the men and women who have died in military service in the defense of our country. There were 1,465 USA deaths in the Battle of Normandy. In addition, 2,700 UK soldiers and 500 Canadian soldiers died. It is estimated that between 4,000 and 9,000 German soldiers died.

D-Day, June 6, 1944, is a very important day in American history. Here is one of the photos I made at the American Cemetery at Normandy in 2002.

A visit to this cemetery, or any other military cemetery, helps us realize what a great debt we owe to those who gave their lives while fighting for freedom. A few years ago, prior to his death, I visited regularly with a veteran of World War II who was at Normandy. I enjoyed hearing him talk about the war, and asking him questions. I was always encouraged when I left his home.

My wife’s father was in World War I. Here is a photo (after a few Photoshop enhancements to take out scratches) of Karl Wayne Williams made in 1917. Thankfully he made it aback alive. Elizabeth says he was born 114 years ago. We honor his memory along with others who have touched our lives. 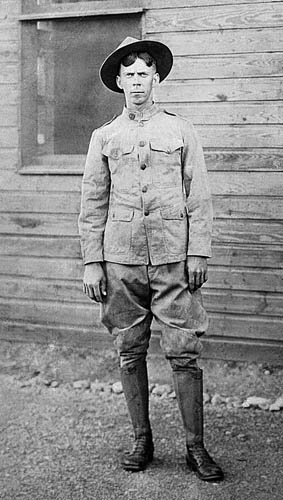 When I was a youngster Memorial Day was called Decoration Day because folks decorated the graves of those who died in war. In addition, graves of family members were decorated. Not a bad custom.

The Encyclopedia Britannica’s Guide to Normandy 1944 has some good maps and charts. Take a look.