On recent tours to Israel we have been unable to visit the Temple Mount. The Islamic buildings there, the Mosque of Omar (Dome of the Rock) and the Al Aksa Mosque, have no spiritual significance for us. The site, however, is very important biblically. It was likely here on Mount Moriah that Abraham offered Isaac (Genesis 22). It is where David placed the ark of the covenant, and where the Temple was built by Solomon in 966 B.C. ( 2 Chronicles 3). That temple was destroyed by the Babylonians in 597 B.C.. After the return from captivity, the Jews rebuilt the temple with the help of the Persian king Darius in 520-516 B.C. Herod the Great more or less replaced this structure with his magnificent temple beginning in 19 B.C. Jesus visited this temple numerous times (John 2:19). In this area the gospel was preached for the first time on the Pentecost of Acts 2.

In the late 7th century A.D., a Muslim ruler constructed the building we now commonly call the Dome of the Rock.

The photo above, made April 3, 2006, shows the Western Wall of the temple enclosure built by Herod. The temple platform, where you see the golden dome, is where the biblical temple once stood. Many news items have been written about the temporary bridge leading to the Temple Mount, and the removal of the earth by archaeologists to reveal more of the Western Wall. There has also been considerable controversy over repairs being made by the Muslims on the Temple Mount.

One good source to help you keep up with this controversy is Dr. Leen Ritmeyer’s blog. There you will find pictures of the terrible destruction taking place. Ritmeyer has drawn many of the excellent plans you may have seen published in various books.

Weeping for the Jordan

“Weeping for the Jordan” is the title of a short news item in Christianity Today, Sept., 2007, p. 17. The article from the RNS says the lower portion of the Jordan River “is so polluted that the World Monuments Fund (WMF) has designated it an Endangered Cultural Heritage Site.”

We often point out to audiences that the Jordan has much less water flowing through it now than it did even 50 years ago. This is because Israel uses much of the water of the Jordan and its tributaries for water and agricultural irrigation. Jordan has dams on the Yarmuk and Jabbok rivers, tributaries from the east.

There is not full agreement among scholars, but many believe that the site where Jesus was baptized by John is a few miles north of the Dead Sea. In 1967 I was able to visit that site. Since the 1967 war it has not been possible for tourists to visit there. A few years back a site was excavated in Jordan that has been claimed to be Bethany Beyond the Jordan (Jn. 1:28).

The CT article points out that the Jordan River is “highly polluted with sewage and agricultural runoff” near Bethany Beyond Jordan, but that some tourists do not realize this and wade in the water.

In 2006 I was able to take my group to Bethany Beyond Jordan and visit the Jordan River. Here is one of the photos made at that time. 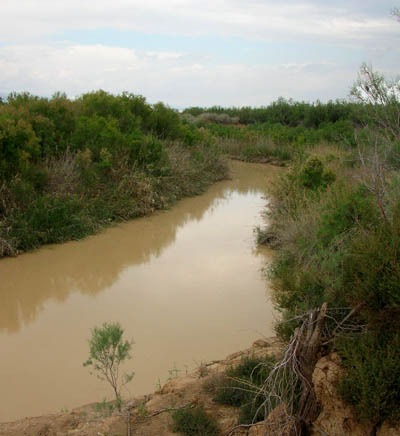 We are hopeful of visiting this site again in 2008. Perhaps it is in the area where John did some of his baptizing (cf. Jn. 10:40). The Israelites crossed the Jordan somewhere near here (Josh. 3), and the prophets Elijah and Elisha crossed in the opposite direction near here (2 Kings 3).

This photo was made on the West side of the Jordan River, in the country of Jordan, in 1967. This is directly across from the Bethany Beyond Jordan site. 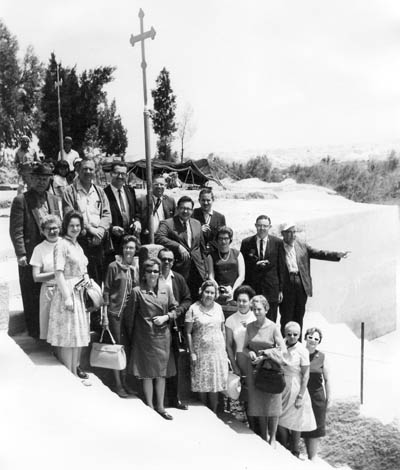 The photo was made on or about May 5, 1967. Notice the attire. Women wore hosiery and other items to help their body hold an ideal shape. Most men wore a coat, and many wore ties on the plane and throughout the entire trip, even in hot weather. Some hotels would not allow a man in the dining room unless he was wearing a coat. Were these the good old days?